Rosita Reveals Her Personal 9/11 Tragedy, Who Helped Her Get Foot in the Door at TNA 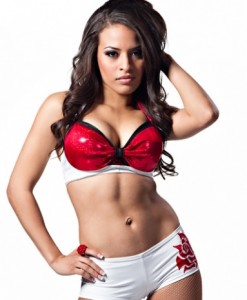 One half of the Knockouts Tag Team Champions, Rosita, is featured in the latest issue of The Wrestler magazine in a piece called ‘Introducing Rosita’ which reveals some interesting facts.

The 20-year-old, real name Thea Trinidad, reveals that her father, an amateur wrestler himself, died in the 9/11 terrorist attacks in New York when she was just 10. Rosita says being around her father made her want to become a wrestler herself.

On her championship win a couple of months ago, Rosita tells the magazine: “The only thing on my mind was, I wish my dad was here.”

Rosita also reveals that she met with TNA star Tommy Dreamer last August and they kept in touch. Dreamer helped her get a TNA tryout in January.

Her tryout was filmed for a documentary about “children of 9/11 victims inspired by their parents,” says the magazine.