SHINE 19 in Review: Shock for Ivelisse as Valkyrie Stand Tall 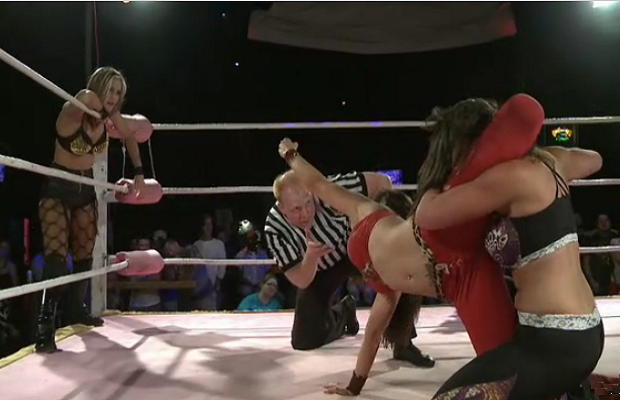 Tyrants rise to power through good people’s complacency. They whittle you down gradually, sneaking into your psyche, sapping your self-esteem and picking you off one by one. Before you know it, there are more of them than you.

That’s what happened last night at SHINE 19, as the villainous Valkyrie found themselves against five of SHINE’s top talents, all of whom had unfinished business with one or more of Valkyrie’s members, in ten-woman elimination action. Things quickly turned aggressive once the opening bell rang, with both sides hitting each other with plenty of offense. Valkyrie enforcer April Hunter looked particularly good in one of her rare in-ring appearances with the group, showing that she’s still got it with some fine, stiff moves and a beautifully-executed Octopus hold on Jessicka Havok. It would take about fifteen minutes before the first fall, as Serena Deeb and SHINE Champion Ivelisse argued in the corner allowing Made in Sin to hit a Seven Deadlies on a helpless Leva while the referee’s back was turned.

The minutes leading up to the second fall were all about newest Valkyrie recruit Su Yung and her former friend Tracy Taylor. Yung would refuse to fight Taylor again and again, taking her offense but with no response. A slap to Yung’s face from Taylor later, however, and Yung was a different woman, locking in Yellow Fever and not letting go. Taylor wouldn’t tap, and it took Yung literally making her pass out to get the elimination and make it 5-3 to Valkyrie.

The third and fourth falls saw bitter enemies Jessicka Havok and Allysin Kay finally collide after being kept out of each other’s paths for some time. Havok had a serious bone to pick with Kay following her collision with a moving car last month, and chased her all around both the ring and the outside, eventually being eliminated via double count-out. Not that either of them seemed to care, however, as they continued to brawl all the way to the back, the SHINE audience safe in the knowledge that things are far from over between these two.

With the score at 4-2 to Valkyrie, remaining babyfaces Ivelisse and Mia Yim knew they needed to even things quickly. They appeared to be heading in the right direction as April Hunter was eliminated soon after thanks to a vicious kick to the head from Ivelisse. However, Su Yung had a different idea, taking Yim out with a senton to the outside before locking her in a suspended surfboard submission and swinging her helpless head into the bottom turnbuckle repeatedly, before a beautiful sequence of strikes and counters culminated in Yim hitting a devastating Package Piledriver on Yung to make the scores level.

This was when Deeb and Ivelisse were finally unleashed upon each other. Their exchanges were sublime, beating absolute lumps out of one another both outside the ring before Deeb brought Ivelisse moments away from tapping with a Stretch Muffler. Suddenly, a state of shock was to fill the Orpheum as Ivelisse countered Serena’s Gory Bomb attempt into a Code Red, only for Serena to counter that back, sitting down to get the three-count and pin the SHINE Champion – clean. Finally, Deeb would prevent Yim from landing a Quebrada on Taylor Made, before getting tagged in and hitting Yim with a spear to win the match after over forty minutes of non-stop action, and with two wrestlers left on the team, as Taylor Made also showed what a trooper she was, being Valkyrie’s exemplary utility player throughout the match. SHINE roster, take heed – Valkyrie mean serious business once again.

With such an incredible match taking up a large portion of the talent pool, the rest of the card was never quite going to be on the same level. The matches were all solid-to-great but had little meaning – kind of how I imagine an ROH show must feel like to somebody watching for the first time.

The match I was expecting to be the jewel in the undercard’s crown – Amazing Kong (accompanied by her All-Star Squad manager Daffney) vs Athena – was very good, if a little on the short side, and probably had the wrong person win (Kong was victorious with a powerbomb after Athena countered the Implant Buster). For a throwaway match, this was nothing to complain about.

What did steal the show early on, however, was La Rosa Negra‘s match against Niya Barela. For a match with no build-up this was a rollercoaster race to the finish, both women really going for it right from the start, letting loose an aggressive edge that only a few matches of SHINE’s past can equal. Niya was being a superb heel, using the ropes for leverage on her pinfalls at pretty much every attempt and just generally being detestable. She got her comeuppance in the end as the boxer Noemi Bosques (a special guest of the show in La Rosa Negra’s corner) pulled her leg from the ropes allowing Negra to capitalise with a backslide. After the match, Niya continued to run her mouth, leading Bosques to smack her square in the jaw, knocking her out instantly. Definitely a match worth checking out.

Two of the matches on the card were heel vs heel, which a lot of people noticed last night on Twitter and which may have somewhat subverted the matches’ efforts to get over, as the fans were left confused as to whom they should be rooting for. The better of the two saw Leah Von Dutch face off against Taeler Hendrix in a fun little match – despite the all-heel dynamic, with Hendrix being a thorn in the side of referee Frankie Gastineau while Von Dutch continues to portray her “Dino Hunter” gimmick (Taeler Hendrix is 24…), they had a really entertaining contest that even the crowd were able to get behind at times. The match ended when both women came out from under the ring with weapons – Hendrix with a curling iron, Von Dutch with a wooden clog – and Von Dutch was able to thwack Hendrix upside the head for the victory.

Nevaeh‘s match against Justine Silver was good, but the same heel vs heel dynamic as before prevented the crowd from really getting behind it. Silver looked solid in her second performance with SHINE, albeit for a few deer-in-the-headlights moments, and with any luck she’ll get the opportunity to iron out the creases in her work at future shows with the promotion, while the experienced Nevaeh did well to keep things moving, eventually picking up the win with a Death Valley Driver. Finally, it was two wins out of two for the All-Star Squad as Solo Darling defeated Luscious Latasha in another fun match, taking her fair share of damage at the hands of Latasha before having a quick time out and a couple of glugs of sugar-based sustenance courtesy of Daffney, sending her bouncing off the walls and getting the win with an O’Connor Roll.

This was an excellent show, largely off the back of the main event, but when that match takes up about a third of the show anyway, that’s not too bad at all. The undercard matches were fine – and one was truly great – but SHINE 19 was all about the ten-woman elimination tag. It really was a superb contest – and one that leaves us with a whole lot of questions to find out the answers to. Has Ivelisse finally met her match in Serena? What on earth is going on with Su Yung? How far will Jessicka Havok and Allysin Kay’s violent feud take them? And can anybody stop the new and improved Valkyrie now? All signs point to SHINE 20. I’d had some doubts about the match prior to it happening, but having seen how it furthered all the stories that matter, I can’t wait to see what happens next.