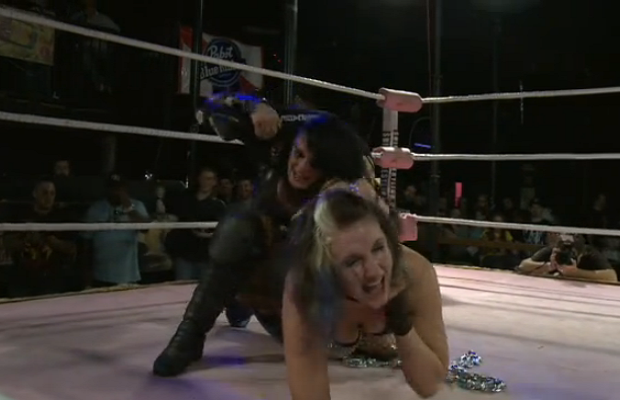 “To secure ourselves against defeat lies in our own hands, but the opportunity of defeating the enemy lies in the enemy itself”. Over two thousand years after Sun Tzu first etched those words into the manuscript of his timeless treatise The Art of War we still see his theory in action to this day, not least in the manner in which we saw Jessicka Havok viciously beat her former best friend Allysin Kay at her own game at SHINE 21 on Friday night.

After eleven months of stalemate since the pair’s acrimonious falling out, comprising no-contests, double countouts, hit-and-runs and an involuntary scalping, both women were given the opportunity to pick a stipulation each for their match. Allysin Kay was looking for a war, and in closed quarters at that. She wanted her and Havok to be inseparable – just like they used to be when they were friends – choosing a Dog Collar and Chain Match to deal out her own brand of poetic justice.

Havok, meanwhile, knew that Kay’s advantage lay in her Valkyrie accomplices, who gave her a significant boost in the numbers game. With that in mind, she chose her half of the stipulation, banning Valkyrie from ringside for the match. As Sun Tzu said, “if their forces are united, separate them”.

The match began with Havok sticking to her usual style of offense, starting with a series of running boots and then planting Kay face-first into the ring apron from her shoulders. However, for every gain Havok made, Kay was able to use her side of the stipulation to her advantage, breaking free and taking control with chokes and chain-wrapped fists. Havok began to wise, understanding that to win this match she needed to be resourceful and innovative with the environment around her that Kay had created. After all, “success in warfare is gained by carefully accommodating ourselves to the enemy’s purpose.”

Applying a gruesome Stretch Muffler in the centre of the ring and using the chain for leverage, Havok started to regain dominance in the match. However, Kay wasn’t going to go down so easily. Even an Air Raid Crash onto a steel chair wasn’t enough to keep her down for the count, and Havok soon found herself on the back foot again, taking another chair to the face and a stiff kick to the back of the head. Kay then took a table out from under the ring, and Havok knew at that point that it was make or break for her. After both women went down to each other’s chain-wrapped fists, Havok was able to get herself up first and drive Kay to the corner, getting her up and mustering enough strength for one final breathtaking Air Raid Crash through the table to get the pinfall and end one of the greatest wrestling feuds in recent history. Havok had played Kay’s game to perfection. “Victorious warriors win first and then go to war, while defeated warriors go to war first and then seek to win”.

Havok took the mic after the match to thank SHINE, its fans and the incredible women who compete for the company, before saying her goodbyes for the foreseeable future. As she left the venue, however, she was attacked by Kay’s Valkyrie cohorts – in particular Su Yung, who spat mist her her face and locked in The Purge. Scant consolation for Kay, however, who now faces an uphill task of picking herself up and rebuilding.

While that was undoubtedly the match of the night, the SHINE Championship match was similarly epic – but with a far less clear-cut finish. Nevaeh had won the opportunity to challenge Ivelisse for the title by winning a Four Corners Survival match earlier on in the show – a match that, considering the quality of the talent involved (Nevaeh, Amazing Kong, Leah Von Dutch and Su Yung) didn’t quite live up to expectations despite a quality performance from the rejuvenated Yung, whose work since joining Valkyrie has been exceptional.

The title match itself was a tour de force of strikefests, submission wizardry and huge power moves. Nevaeh almost had the win within ten seconds of the opening bell, hitting the Backpack Stunner for a two-count and nearly sending a colossal shockwave through the Orpheum. With every move Ivelisse hit, Nevaeh was there to go one better, and after a devastating release German suplex it looked as if she had the title in the bag. Indeed, she had Ivelisse pinned for far longer than a three-count – but the referee was nowhere to be seen, having fallen to an accidental strike moments earlier. Nevaeh was beside herself, and her frustration may have been her eventual downfall as she succumbed to a Code Red shortly afterwards allowing Ivelisse to regain her title. Ivelisse can think herself lucky she still has the belt though, and given the finish I sense a rematch on the cards – something which I have no problem with considering the quality of the match.

The other championship match saw the Lucha Sisters (Leva Bates and Mia Yim) invoke their rematch clause against SHINE Tag Team Champions Legendary (Malia Hosaka and Brandi Wine). Almost from the very beginning of the match it looked like the result was inevitable, with Bates and Yim dominating for virtually the entire contest. It seemed almost too perfect for the SHINE fans, who were still directing major heat towards Hosaka and Wine for their title win at the last show – and the finish gave the fans no reason to cease their animosity, as Legendary got the win with the surprise help of Thunderkitty, who appeared with one of the title belts and struck it in Bates’s face. Though the Kimber Bombs came out to make the save, Thunderkitty, Legendary and Leilani Kai neutered their offense quickly, leaving the SHINE world in shock at this new alignment.

Earlier on, Thunderkitty had made her SHINE debut against the impressive youngster Justine Silver. In a fun match – one of the better ones of this show’s undercard – Silver used her quickness to try and keep Thunderkitty grounded, looking for moments to sneak quick rollups. Eventually, however, TK was too much for her, locking in a tight sleeperhold with bodyscissors to make Silver pass out, but Silver will have certainly turned a few heads after her performance.

Two teams with their eyes on the SHINE Tag Team belts picked up important wins on the show. Daffney‘s Buddy System – Heidi Lovelace and Solo Darling – found themselves with makeshift opponents after Marti Belle was forced to no-show following a car accident. Her partner Jayme Jameson announced Amanda Rodriguez to take Belle’s place, but with the extra preparation time Darling and Lovelace were able to get the win in a solid, if unspectacular match, thanks to their brilliantly-titled finisher “You’ve Got a Friend in Me”. Meanwhile, the Kimber Bombs solidified their status in SHINE as babyfaces with a victory over the SNS Express (Sassy Stephie and Jessie Belle). The Express kept Kimber Lee isolated for much of the match, and to further frustrate proceedings, when Kimber was finally able to make the hot tag to Cherry Bomb, the referee was unable to see it. In the end, however, they would get the last laugh, taking advantage of a miscommunication between the Express and getting the win with a Swanton Bomb from Kimber to Jessie.

Though Allysin Kay and Su Yung both had losing efforts, their Valkyrie partner Taylor Made provided a consolation victory for the group, defeating La Rosa Negra – albeit in heinous fashion. In an aggressive, fast-paced match, Made showed no signs of rust considering her lack of singles experience in SHINE, while La Rosa Negra continues to be SHINE’s gem under the radar. After Made’s enforcer April Hunter pulled Negra away from the pin following her diving splash, she then passed Made a set of brass knuckles, allowing her to deliver a blistering knockout blow to Negra and pick up a classic heel victory. Great stuff.

Make no mistake about it, this was a two-match show, that could have easily just been a one-match show had it not been for such a great unexpected match between Nevaeh and Ivelisse. The main event was superb, and the perfect sendoff for such a brilliant servant to the promotion as Jessicka Havok. The undercard matches, while not bad by any stretch of the imagination, meant very little and were missing a lot of the plum ties we’re so used to seeing on SHINE shows. Aside from Valkyrie’s continuous story and Thunderkitty’s debut and hasty alignment with Legendary, the show left us with few real questions about future storylines, and it’ll be interesting to see what they book for the next show to get fans truly excited. For the last two matches, however, SHINE 21 is well worth the money.