SHINE 23 in Review: A Touch of Ivel 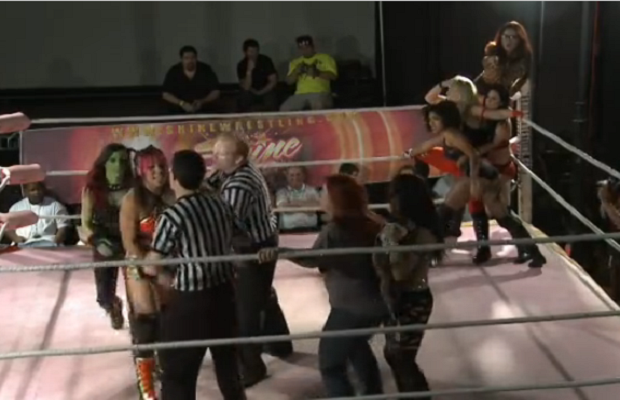 SHINE returned to proceedings after WWN’s successful China tour with a new champion and whole lot of scores to be settled as 2014 draws to a close.

Following a showing of her title victory in China, new SHINE Champion Mia Yim kicked off the show by making it clear that she plans to hold the title for a long time to come. The woman she won it from, Ivelisse, however, was less than impressed, and made it clear that she wasn’t going to let this die so easily.

Later that night we would see what both of those women meant when Yim faced number one contender Nevaeh (accompanied by SoCal Val and BTY, the remaining members of Valifornia) in her first title defense. A ferocious, back-and-forth match that saw exchanges of stiff strikes, explosive German Suplexes and much more, it met its abrupt end when, after BTY took out Yim while the referee wasn’t looking, Ivelisse came to the ring and attacked Nevaeh in plain view of the ref, giving Nevaeh the disqualification victory – but Mia still retained the title.

Utter chaos ensued, with both match participants showing their frustrations by going after Ivelisse, before escalating into an all-out brawl featuring people on all sides. A furious Ivelisse demanded Lexie Fyfe give her the rematch she felt she deserves, knocking out both referees and attacking Fyfe herself when her demands weren’t met, before finally being dragged out by security.

At the start of the show, Ivelisse’s first match since returning to SHINE empty-handed was a short and resounding statement of intent, as she destroyed up-and-coming Amanda Rodriguez who, while not backing down and getting some plucky offense, was an unfortunate victim of circumstance to be put in the ring with such a focused and incensed Ivelisse, who tapped Rodriguez out in a couple of minutes to show everyone in SHINE that she is still not to be underestimated.

The Kimber Bombs (Kimber Lee and Cherry Bomb) put on one of the performances of the night, coming up just short in their title match against SHINE Tag Team Champions legendary (Malia Hosaka and Brandi Wine) – but only thanks to interference from Leilani Kai and Thunderkitty – one of perhaps a few two many unclean finishes on this show’s card. The action in the ring was superb though, with some great spots, including a magnificent double suplex from the Kimber Bombs to their opponents, with one landing on top of the other in perfect harmony.

In one of the shocks of the show, Amber O’Neal‘s match against Luscious Latasha was thrown out quickly after O’Neal’s attempts to bring a steel chair into the match were thwarted by none other than her erstwhile friend and tag team partner Santana Garrett (newly-former TNA Knockout Brittany), who confronted O’Neal about her new heel ways.

Amber responded by saying that Santana only knew Amber O’Neal, and immediately rechristened herself as Amber Gallows, the Bullet Babe, declaring that Santana had found her way onto her hitlist, and setting up a match between the two for later on in the show – Santana’s first match back in a SHINE ring since January. In the only face victory on this month’s show, Santana made surprisingly short work of the newly-named Amber Gallows, pinning her with a jackknife roll-up. Amber, beside herself, took it out of everyone around her, including the referees. ring crew and everyone else. Amber O’Heel.

Valkyrie’s momentum continued to chug along despite the group’s slight fall from the spotlight in recent months, with Allysin Kay getting a win over Crazy Mary Dobson and Taylor Made defeating La Rosa Negra. Kay’s character was in fine form, keeping up a facade of sportsmanship for the opening minutes, shaking hands and holding down the ring ropes so Dobson could get back in the ring, before showing her true colours once Dobson began to pick up steam. From that point on, the match blossommed into a great back-and-forth affair, with Dobson very almost getting a surprise win after a split-legged moonsault, but for an instinctive grab of the rope from Kay. In the end it was a devastating discus lariat that would separate the two, but Dobson more than impressed on this rare SHINE appearance of hers, and hopefully she’ll be around more frequently in 2015.

Meanwhile, Taylor Made made use of April Hunter and some brass knuckles to win her match, knocking out La Rosa Negra in what was another solid match between two of SHINE’s most impressive breakout stars. After the match, Ivelisse would come and help her fellow Puerto Rican to the back – one of two odd and slightly out-of-place tweener moments for Ive, especially when viewed with the benefit of hindsight after her heinous actions after the main event.

Two more of SHINE’s tag teams were also in action, as the indefatigable team of The Buddy System (Solo Darling and Heidi Lovelace, led by Daffney) looked to get themselves back in the title picture after their defeat at the last SHINE show, by taking on Nevaeh’s Valifornia teammates BTY (Marti Belle and Jayme Jameson) in a really fun match which showcased just how far Darling and Lovelace have progressed as a team since their formation, with slick tandem offense and an insatiable energy that the crowd absolutely love, while Belle and Jameson showed us all their calibre as heels in a parallel fashion, with SoCal Val at ringside continuing her immediate impact on the SHINE landscape. Jaymeson picked up the win for her team with her feet on the ropes for leverage, and to add insult to injury, BTY continued their assault after the match, with Belle brutalising Lovelace’s knee with a steel chair. A great match and another emphatic statement from SHINE’s newest dominant stable.

SHINE debutante Vanessa Kraven had a successful first outing against the ever-popular Leva Bates, who was dressed as…nope, no idea. This match worked the “big and small” dynamic to a tee, with Kraven using her weight, height and an array of power moves to incapacitate Bates, who responded with sporadic but effective and athletic offense. In the end, it was the towering Alaskan who would emerge victorious after a thunderous sitout choke bomb. A David-and-Goliath affair, but without the happy ending.

Finally, newly-face Leah Von Dutch‘s quest to eliminate SHINE of its veterans continued – albeit unsuccessfully – against Legendary’s newest recruit, Thunderkitty, in another fun match that saw Legendary’s enforcer Leilani Kai take advantage of the referee’s back being turned several times, something that would ultimately lead to TK’s victory after she countered Von Dutch’s sunset flip powerbomb attempt into a pinfall, with Kai helping get purchase for the victory.

With a new champion and a number of pretenders to her throne, SHINE looks set to kick off 2015 with a bang. With Nevaeh now having been robbed of the SHINE Championship twice and Ivelisse still after her rematch, we could see some interesting pairings (or indeed trio-ings) in the months to come. The number of unclean or interference-based finishes may have been somewhat excessive, but proved successful in terms of plot development, as we now have plenty of grudges to be settled at the next show. As usual, the wrestling was top-notch – this time without a single dud match, and a good few superb ones – and with the imposing figure of Vanessa Kraven now on the books as well as the return of Santana Garrett, and FOUR top stables all active on the card, the talent pool is now so deep it’s getting hard to see the bottom. That can only be a good thing.