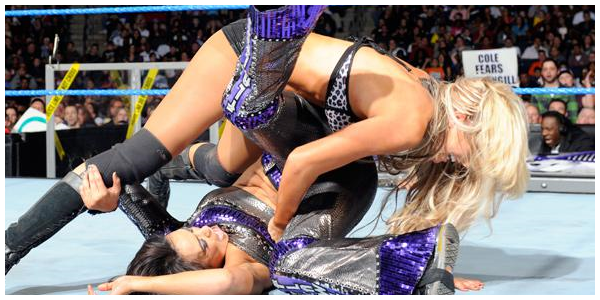 FINALLY… FINALLY! CRYSSI HAS COME BACK TO THE SMACKDOWN REDUX!!!!!! Don’t you just love it?! It’s been a minute since I’ve actually sat down to type one of these up. As you all know I had the privilege of going to SHIMMER two weeks ago and that was followed up by my first ever WrestleMania week experience. It would take me hours and hours to express my thoughts and feelings on everything that happened during those twelve glorious days I was away from home so I’m not going to bother. Instead, I’m going to jump right back into the swing of things and indulge all of you in another amazing Redux. I sure picked a heck of a week to return, mind you. The rarely seen Divas known as Beth Phoenix and Kelly Kelly were in action. Time to put those milk cartons away, kids. They’re no longer MIA. On this hot and steamy Friday night they teamed together to take on ‘Mania losers, Michelle McCool, and lovely Layla.

Lay-Cool kick us off tonight with their ring entrance. They talk amongst themselves as they make their way down the ramp and of course, we are reminded that Michelle was destroyed by Snooki sometime during that infamous ‘Mania match. Michelle is not thrilled with the replay and Booker T makes a comment that tension has been brewing between Lay-Cool since that match. Interesting.

Lay-Cool’s theme is soon replaced by Kelly’s and the crowd erupts. Kelly and Beth make their way to their ring and they look amazing (sans Kelly’s hair). Kelly and Beth play to the crowd and once all four ladies get in their designated positions, it’s match time. There’s a small debate between Michelle and Layla over who will start the match and Layla basically forces it on Michelle. Beth is starting for the faces and the old rivals start sizing one another up. They lock up and Beth immediately shoves Michelle to the mat and follows her into the corner. She begins beating down the former schoolteacher until finally McCool is able to get away.

Beth is relentless and she grabs Michelle, throwing her across the ring. Unlike the one on Tough Enough, this Michelle is able to run the ropes and unfortunately for Layla, Michelle runs right into her. Layla had been standing on the ropes cheering for her bestie and when Michelle knocks into her Layla literally goes flying in mid-air. It’s the most insane thing I’ve ever seen. Who knew Divas could fly??

While Layla lays around on the outside, things continue inside. Michelle scrambles away from Beth, backs up to her corner, and waits for Layla to tag her.

But Layla isn’t there. Duh.

Michelle sees her parnter on the outside of the ring and she begins screaming. She wants to know why Layla isn’t on the apron. Beth uses the distraction to roll Michelle up, but the FSU alumn is able to kick out. Beth is quick to scoop Michelle up and nail her with back-breaker. She goes for another cover. Michelle kicks out. She goes to her corner and Layla tags herself in. Michelle doesn’t seem pleased and she wants to know what’s going on. The two bicker and finally Michelle just shoves Layla away. That sends her into the clutches of Beth who powers her (Layla) up over her (Beth’s) head. Layla is screeching and for her efforts she gets dropped across the turnbuckle. Beth swiftly kicks her opponent in the abdomen and Kelly asks for the tag.

The former main-event Divastar (see how clever that is?) comes in and sits herself down on the turnbuckle. She wraps Layla in a choke and flips back onto the apron. She holds the move for a four count and flips to the ground, sweeping Layla’s feet out from underneath her. Layla faceplants the mat and Kelly is back on the turnbuckles again, this time flying off. Layla is hit with a lovely crossbody and Kelly goes for a cover. Two count. Kelly cheekily slaps Layla on the bum once the two girls get to their feet and the insulted Brit goes for a big right hand. Kelly is able to block and then she surprisingly catches Layla offguard with a nice little almost finisher. She attempts to put her opponent away but Layla is able to kick out again.

The last ever Women’s Champ finally begins to mount some offense. She strikes Kelly with a few decisive kicks to send her reeling and she looks for the tag. Michelle grips her lower back in pain and rolls off the apron, leaving Layla to fend for herself. Layla hollers at her and Kelly gets right in there and rolls her up. Layla is pinned for the one… two… three and Beth jumps in the ring to celebrate with her partner. The two embrace while Layla looks annoyed. Michelle claims that her back hurts but she’s walking away just fine. Layla can’t believe it. The two girls bicker up the ramp as SmackDown fades to a promo for Christian versus Alberto Del Rio later.

Personally, I found this match pretty much. I like the mean girl antics between Michelle and Layla to one another, and I love how Michelle is just so heel in this situation. What I adore even more is the fact that Beth and Kelly got screen time and a much needed win. It still disappoints me that Kelly wasn’t involved at WrestleMania but I’ll take this as a small consolation. WrestleMania always restarts the year for the Divas and their male counterparts and I believe that the Summer of 2011 could be the Summer of Kelly Kelly. The Diva’s Championship is just sitting around backstage at Raw on a champion that is never featured so why not shake things up?

Anytime Beth gets to wrestle is an absolute treat. The WWE sorely dropped the ball on her comeback earlier in the year, so here’s hoping bigger and better things are going to happen to the Glamazon in the post WrestleMania era.

Lay-Cool seem to be on the verge of a split but this has been teased so many times before that I’m not getting my hopes. In an interesting twist, the drama did continue backstage.

After a commercial break, Michelle is seen standing around pacing. She looks visibly upset over what happened earlier and Layla comes up to her. She wants to know if Michelle has calmed down any and Michelle just wants to be left alone. Layla ignores her, asks about Michelle’s back, and brushes off her friend’s response. She’s got a card in her hand and claims that she meant to give it to Michelle last week. It’s an appointment for couples therapy and Michelle tells Layla that they’re not a couple. Layla doesn’t care and says they need the help, and Michelle disagrees. She says Layla needs the help, but the Brit isn’t having it. She demands that Michelle show up and walks off, which prompts Michelle to make a snarly remark about how she’s always the one who shows up. She tosses the card and SmackDown fades towards the ring area.

All I can say is I truly hope we get video of these counseling sessions.