SmackDown Redux (August 28th, 2009) – The Acting May Suck, But the Understudy Still Shines 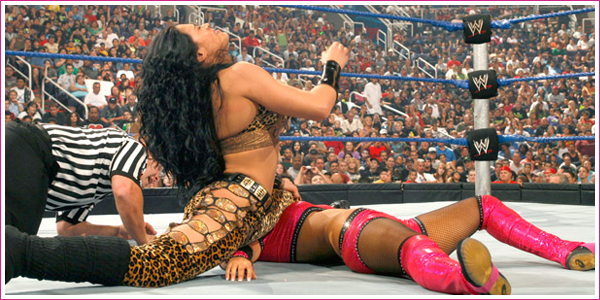 Last time on SmackDown: Michelle made her return, sitting at ringside as Melina & Maria defeated Layla & Natalya. No physicality form Michelle other than a shove onto the keister by Melina.

This week: Will Michelle step up into a more physical role, or is she still sidelined? Will the WWE even acknowledge her injury? Will Maria grace us with another mind-blowing in-ring performance? Let’s dive in and see!

This week’s Diva action starts off much like it has in the past few weeks (the “Michelle-less weeks”, as I like to call them). Even though Michelle’s back and we have an actual wrestling storyline to promote, Maria is still having problems with Dolph, the part-time wrestler, part-time C-Grade porn star. Melina mentions something about “going around in circles”, and I think that describes this storyline pretty well–it’s like a dog chasing its tail, always with some sliver of a harebrained goal, but never quite reaching it. But even the dog gives up eventually, so we’ll have to wait and see if this actually plays out.

Okay, enough with the mixed metaphors. Maria seems pretty frustrated with Melina, asking her why she can’t just be happy for her. Maybe because, with this Dolph thing, you’re fixing to drive into a brick wall? Maybe Melina should just say “Bon voyage!” and send you on your way. Melina explains that she saw Dolph with another woman after SummerSlam. (Are you sure he wasn’t just looking into a mirror? Dude’s pretty feminine-looking.) Maria pulls out the old “Mean Girls” argument, telling Melina that she’s probably just jealous of her. Melina tells her she’s sorry and splits, just as Dolph comes up. He tells Maria that the woman he was with was his sister. (OMG, maybe she looks exactly like him but with a longer blonde wig. I’d pay to see that.) Maria believes it, of course, and we’re set for another few weeks of captivating drama. UNTIL NEXT WEEK, on “The Young & the Shitty Wrestlers”.

Watch the segment below, then skip to 4:40 to see the subsequent match:

Now that we’ve got the backstage portion of the show out of the way, we have an actual match to get to (Please excuse the male match in between on the video–don’t they know that all male matches are glorified piss breaks? They’re not even real wrestlers!) Michelle has made her way to the ring and she’s on crutches! Shit. She takes the microphone and explains that due to Melina’s brutal attack last week, she’s got an injured knee. What a coincidence! She says she’s not medically cleared to wrestle and shouldn’t even be standing on it (Probably shouldn’t be wearing sky-high heels either.. Just sayin’.) She says that Melina ruined the night. Thanks a lot, Melina! God, what a bitch!

But seriously, Michelle’s mic work is definitely improving–she works the crowd, and plays the arrogant heel role pretty well. All she needs to work on is her lack of inflection due to her strong southern accent. She goes on to introduce Melina’s opponent for the night, whom she describes as a dear friend: Layla! As she makes her entrance, Todd describes her as Michelle’s “understudy” of sorts, and I have to admit that she’s not a terrible replacement–you could certainly do worse. Melina comes to the ring, and we can start the mach. They start with a tie-up, which Melina dominates into a pin attempt. No cigar, and Layla takes the advantage, tweaking Melina’s arm and kicking her in the gut for good measure, keeping a tight hold on the arm. Melina breaks free with a kick of her own, delivers an irish-whip that is reversed into the corner, and meets a charging Layla with two feet to the face. (Whoa, did the WWE pipe in that reaction? Damn.) Melina takes Layla down with a leap from the top rope, and sells her left ankle, which always seems to be giving her trouble.

She hobbles a bit while delivering a few offensive blows to Layla, but Layla eventually smells the blood in the water, nailing Melina’s ankle with a low dropkick. She falls to the mat with a blood-curdling scream–that’s some impressive selling. You’d think Michael Myers was chasing her. Layla goes into strategy-mode, wrapping Melina’s prone leg around the bottom rope and landing on it. She does a leg-sweep, keeping a grip on the left leg and twisting it. Layla gets a failed pin attempt, and tries to stay on offense, but Melina delivers a few stomach blows, and when Layla runs the ropes, Melina reverses into the Primal Scream. She locks Layla into it out of nowhere–which is pretty impressive in itself–and hits it. Layla’s down for the count, and Melina gets the sudden win. Melina hobbles and celebrates, while Michelle hobbles and gets ready to depart.

Though, Melina doesn’t want Michelle to leave without saying goodbye, so she darts out of the ring and delivers a shove just like last week’s, this time sending crutches flying and Michelle back on her butt, taking the desk chair with her. Melina just stands and stares Michelle as she’s sprawled out on the ground, in agonizing pain. It’s almost heel-like, how she attacked an injured person and took pleasure in just seeing them lay there in pain. Though, I won’t ever complain about seeing someone think outside the box and do things that blur the hell-face line a bit. I’m sick of sympathetic, innocent and sweet babyfaces! Do what you feel like, even if it means attacking a cripple. Don’t take that out of context, please..

The match itself was pretty short, but it still gave Layla plenty of time to perfect her heel persona–she zeroed in on Melina’s ankle and used some intelligent mat wrestling to take advantage of it. Melina didn’t do much other than play hurt, deliver a little offense, and outsmart Layla into the Primal Scream, but she played her role perfectly. It’s impressive to see two Divas given so little time to deliver a match, and yet they still pack it with everything they’ve got and manage to tell a story in a fraction of the time that the men are given. Work with what you’ve got, ladies! You’re doing it beautifully!

Todd remarked that Melina’s attack on Michelle may land the Women’s Champion with an even more severe injury. (Maybe Melina could lend Michelle her healthy right leg, and Michelle can give Melina her good left one. Problem solved!) Does that mean that they’re banking on Michelle staying injured for a while? It sucks, but I’d rather have her heal fully than risk an even worse injury by stepping into the ring so soon. And if this week’s action is any indication, they may do just fine with Michelle on the sidelines and Melina fending off her “understudy”. It’s a more inventive way to prolong a feud, and as long as they’re being creative about it, I won’t be complaining.