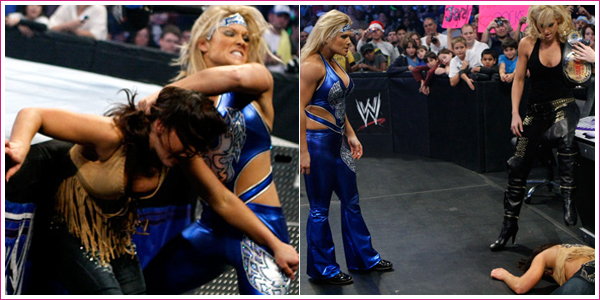 Santa has delivered this week’s SmackDown early, hurrah! So instead of interrupting your Christmas Day celebrations, and mine, I thought I’d write the Redux tonight instead.

Let’s start off with the backstage segment in which Michelle McCool and Layla give Mickie James a Christmas gift:

So Michelle and Layla present Mickie with a Jenny Craig gift certificate and it’s very evident that whoever wrote this put more effort into coming up with the ‘Christmas ham’ line than most things they do with the Divas. The creative new ways they seem to find every week to insult Mickie goes to show that when they actually care, the writers put in effort. It’s a shame what they care about is ridiculing a long time, valuable employee on national television every fucking week. The end of the segment sees a long gazing shot at Mickie who is clearly upset by McCool and Layla’s ‘gift’.

As for the acting in this segment, despite what was being said, I thought McCool and Layla had good delivery. Though the unison chanting with hands in the air has already gotten old. As horrible as it may be, the attention that this storyline has gotten week to week, has to be something of a motivator to Michelle because I feel she’s stepped up her game in recent weeks in the acting department. She does sell the part well and I think this could be the storyline that finally draws her heat from the crowd.

Next up, we have a Divas tag team match.

I don’t quite understand how, despite it being Christmas Day, we were spared a Santa’s Little Helper match here but given one on Raw. Though I can’t say I’m complaining.

Women’s Champion, Michelle McCool is on commentary for this match while the previously seen Mickie and Layla compete with tag team partners, Maria and Beth Phoenix respectively. With McCool on commentary with Striker, we are ‘treated’ to a match length’s worth of fat jokes, insults and jibes. Hoorah!

As the match begins, a visibly distraught Mickie wants to attack Layla right at the bell but is held back by Maria. So just in case the fat jokes haven’t done the trick, WWE has the girl act like a big, blubbering mess for the length of the match. Women can’t control their emotions~ seems to be the message being sent here. Fuck you, Vince and fuck your merry band of misogynists. I’m sorry, I obviously cannot control my faculties, being a woman and all… But seriously, this storyline hadn’t infuriated to such a degree until now.

Anyway, the match begins with Maria and Layla in the ring; Maria leads the offense with a hip-toss and two dropkicks with great selling by Layla. Maria then hits a butt bump of all things to Layla in the corner before choking her with her foot. Layla tries to hit a hip-toss of her own but Maria counters with a knee to the stomach, she tries to throw Layla against the ropes but she counters and then kicks Maria in the stomach. This leads into a beautifully executed roundhouse kick to Maria’s head. My jaw pretty much dropped right here. Perfectly executed move right there. Layla goes for a pin cover but Maria kicks out, she then tags out to Beth Phoenix. I have to say, I was not expecting much of anything between these two Divas — they both tend to be carried by more experienced workers but Maria and Layla had a great chemistry and their exchange was crisp and not the embarassment I expected. That kick by Layla at the end was just superb.

So we now have Beth in the ring with Maria. As expected, Beth wears down Maria and then hits an interesting move — she goes up to the top turnbuckle and then comes crashing down on Maria. Very impressive. Beth chokes Maria on the ropes but then Layla hits a blind tag, surprising the Glamazon. Layla hits a snapmare followed by a low dropkick on the Diva of the Year before applying a submission move.

Oh and just at this point we cut to the blubbering Mickie James. Them women folk… *Eye roll*

Maria mounts a comeback but gets shoved back to the canvas by Layla. Layla misses a legdrop which allows Maria tag out to Mickie James, who sells the emotion of her ‘character’ by charging directly at her tormentor. Mickie begins slamming Layla’s head to the canvas repeatedly. Mickie throws Layla across the ring by her hair and then knocks Beth off the apron. Back in the ring though, Layla is now on her feet and goes for a second roundhouse kick but Mickie ducks and then hits her own Long Kiss Goodnight with great exection. A nice flurry of exchange there between Lay and Mickie. I loved the fast pace here, giving that vibe of ‘anything can happen in a second’. Mickie picks up the win with the pin on Layla, all the while glaring at Michelle McCool.

After the match, the emotionally unstable~ Mickie James jumps out of the ring and attempts to attack Michelle, who is at ringside on commentary. Michelle leaps out of her chair and hurls it at Mickie, then hides behind the announce desk. Mickie jumps up on the table but Beth Phoenix comes out of nowhere and knocks Mickie off the table. Beth then clotheslines Maria and throws Mickie into the announce table. Michelle hovers over Mickie and then has sort of a facial expression exchange with Beth. Are they in cahoots? There was a considerable amount of heat after Mickie was laid out, whether it was for Beth or Michelle is debatable. Perhaps both?

As I said, this week’s show was definitely a mixed bag. The action was red hot while the underlying ‘Piggie’ storyline stuck around for the whole two Divas segments like a bad stench. The match here was a fantastic way to end 2009 for the Divas of SmackDown. Mickie looked fiery and full of vim and vinegar after she was given the hot tag, launching at Layla. Meanwhile, the less experienced Layla and Maria, whom I wasn’t expecting much from, played their parts really well. This match was a true testament to the former Diva Search winner in particular, I think this was her best outing of the year. She just looked magnificent in the ring and has come such a long way; she controlled the match, she showed great offense, sold fantastically and showed lots of ring savvy. That kick, again, was beautifully done.

As for the commentary and Michelle McCool. Well we all expected a shit ton of ‘Piggie’ jokes here and we got them, but as I said earlier, I think Michelle did a good job in her acting role. She didn’t have the same monotonous tone we’ve seen in past commentaries, plus I think she had quite a good chemistry with Striker and Todd Grisham.

The end of the match is where all the ‘oohs’ and ‘ahhs’ come in. Where the hell are they going with this?! Last week it seemed like we were gearing to a Beth Phoenix tweener/face turn, with her being set up as Michelle’s next challenger. This week, it seems as though we have reverted right back to Mickie. It’s sort of like Lost, where the episode is told from the point of view of a certain character — last week Beth, this week Mickie. I have to say, I kinda like it… it builds character while delivering the standard matches each week. Perhaps next week a Michelle-centric episode?

But I digress, given what happened last week and then this week, where is this going?! It could turn out that Beth has joined Team McCool but quite frankly, I was preferring her lone wolf tweener character from last week. It seemed as though she was being teased as the next title contender, but now it seems as though Mickie is still the main challenger. Perhaps WWE has in mind a three-pronged feud? I’m not sure where this is all headed, but I think there’s something quite exciting in not being able to call it. One thing is for sure, SmackDown definitely has me gripped.