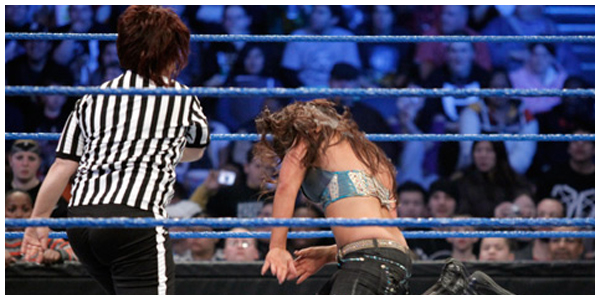 Earlier this week, WWE announced that the victim of the ‘original screwjob’, Wendi Richter would be inducted into the WWE Hall of Fame in April. Coincidence, then, that in the same week another Diva is the victim of a modern day screwjob. That Diva is Mickie James, a who woman who seemingly had the odds stacked against her this week on SmackDown. See the drama unfold below:

The odds didn’t look good last week, when Vickie Guerrero announced that Mickie would defend her Women’s Championship against Michelle McCool this week with Guerrero serving as guest referee. Factor in Layla at ringside and you had to wonder could Mickie unleash her inner ‘Super Cena’ to overcome the odds? Many, including I, expected Mickie to somehow retain the title. So imagine my shock and awe when I read that McCool had taken the title from James just three weeks after losing it at the Royal Rumble. Vickie Guerrero, who has proven to be quite the thorn in many a Superstar’s life [just ask Edge], can now add Mickie to the list of stars she’s screwed over.

We begin with Guerrero being introduced as the guest referee to a chorus of deafening boos. She’s followed by the challenger, McCool and run-in buddy Layla, sporting new red hoodies. The champion, James is last to enter the arena. Vickie holds up the Women’s Championship before the bout begins in a rather official manner. Nice touch.

As the bell rings, Michelle and Mickie look up before Michelle applies a side headlock to the champion. Mickie throws Michelle against the ropes but she comes back with a shoulder block and knocks the smaller statured James to the canvas. Michelle goes against the ropes again but is met by a dropkick from Mickie followed by a low dropkick. Mickie then paces towards McCool but is met with a kick to gut. McCool throws Mickie into the corner, Mickie this time is the one to hit Michelle with a kick to the gut. Mickie then hits a neckbreaker on Michelle and goes for a pin cover. Convienently, Layla jumps up on the apron and referee Vickie is forced to deal with the intrusion while Mickie in the ring, could have pinned Michelle to retain.

Mickie has words with Vickie before Michelle sneaks up on her from behind and tries to throw her out of the ring, instead Mickie counters and throws Michelle out of the ring through the ropes. Here’s where things pick up. Mickie hits a baseball slide on McCool followed by an elbow. Mickie then struggles to use the apron for a couple of seconds to hit her patented headscissors but eventually connects. Great, great selling from Michelle. We then get some shrill shrieking from Vickie telling the pair to get back in the ring. Mickie takes no notice and hits Michelle face first into the barricade before rolling her back into the ring.

As Mickie gets up on the apron, Layla distracts her and Mickie kicks her. Michelle slides back out of the ring and grabs Mickie’s leg, throwing her off the apron onto the floor outside. Mickie seemingly hits her face on the floor… ouch! Michelle now in control, rollows Mickie back into the ring, mounting her and smashing her head against the canvas.

As the action continues, we cut to backstage where Beth Phoenix after weeks of absence has finally re-appeared! Yay! Beth — with a flowered hairband [really Glamazon-like, Beth] — is watching the championship match unfold. The insinuation here is that she wants a piece of whoever wins the belt. We want to see it too, Beth!

Back at ringside, Michelle lays in a kick to a fallen James and continues to kick her, keeping her on the ground. Michelle signals her finisher but in the corner, Mickie has managed to get to her feet and kicks Michelle in the stomach. Mickie fights back with forearms but McCool lays in knee strikes to Mickie’s stomach. Michelle sets up Mickie for her finisher, with Mickie in powerbomb position, she begins fighting back with punches to the head and then hits a hurricanrana on McCool.

Mickie begins mounting a comeback with a clothesline and forearms but is then hit with a belly-to-belly suplex by McCool. Michelle goes for the cover but as Vickie tries to get into position for a pin, she somehow falls through the bottom rope onto the floor outside. Time for some Layla comedy as she comes to Vickie’s aid and rubs her bruised butt for her. Meanwhile in the ring, McCool is aggravated and perches on the ropes trying to find out what’s going on. Mickie from behind rolls her up and screams for Vickie to get back into the ring. Vickie gets back in the ring, taking her sweet time but instead of going for a pin — slaps Mickie across the face!

Mickie begins screaming at Guerrero but out of no where is hit with a big boot from Michelle who covers her for the 1, 2, 3 and becomes the new WWE Women’s Champion!

After the match, Guerrero celebrates with Layla and the now two-time Women’s Champion, McCool.

So… where do we begin? This was an extremely strong episode of SmackDown for the Divas with plenty of drama that should have interesting ramifications for coming weeks. Vickie screws Mickie out of the Women’s Championship. Beth Phoenix watching on. There’s so much going on here that should make for must-watch television over the next few weeks.

The match wasn’t as good, I felt, as the match at TLC last December but I particularly loved the spots on the outside — it had some of that aggression that we expect to see in a PPV-caliber Women’s Title match. I appreciate the effort there. I thought both Divas were solid in the ring but the match lacked a certain oomph until the explosive ending.

The whole situation with Mickie and Vickie has been interesting to see unfold over the past few weeks and I’ve said plenty of times in the Redux that I like the idea of Vickie getting involved. Last week, I feared that Vickie may herself challenge Mickie for the Women’s Championship but with her now aiding McCool to the belt, we can wipe our foreheads! I’d much rather see Michelle as champion than see Vickie potentially feud with Mickie. At least now, it grounds the storyline to the girls that can wrestle with Vickie acting as a plot device.

So Mickie’s three-week Women’s Championship reign comes to an end. I know a lot of people are going to be annoyed about that and yes, I think it’s awfully short but I think it’s also exciting at the same time. While Michelle held the title for a long time and it seems too early to give her another run, I felt she was a strong, entertaining champion and I think it makes more compelling television to see the likes of Mickie and hopefully, Beth chase her for the belt. The question here is whether Mickie will again chase for the title. With her music career and supposedly tenuous position with WWE management, it does seem like a possibility that this could have been her final title run in WWE. Does WWE know something that we don’t? Time will tell. It just seems to me that with all that they did to Mickie, all the fat jokes etc., they had to reward her with the Women’s Title at the Royal Rumble in a ‘good prevails’ sort of way to put that storyline into context, but they never intended to really give her a lengthy title run. So I feel like this may have been in the works all along — to give Mickie the belt as a device to put that storyline into context but then take it off her sooner rather than later. If my theory is correct, I just find it extremely shady.

My guess is that this is the end of the line for Mickie in the top title storyline, being pushed to the backburner for Beth Phoenix. The emphasis of Beth Phoenix watching on to me suggests that she may be the next challenger in line for McCool’s title — perhaps she’ll take exception to the way that Michelle won the belt? I’ve really enjoyed the development of Beth, that is until they dropped her randomly a few weeks ago. With her now back, I would like to see that development in her character continue because she has a great tweener quality to her.

I think they may split off now into two Diva feuds: Michelle vs Beth for the title and Mickie vs Vickie in a grudge feud. Both of those excite me, the Mickie/Vickie feud moreso now that the title isn’t involved. Meanwhile, Beth vs Michelle, I mentioned at the beginning of the year is my dream match for WrestleMania 26. Fingers crossed.

In all, this week’s show was either good or bad depending on who you’re a fan of. For me, I’m excited to see Michelle as champion because I find her entertaining as champion and I think with her alignment with Vickie, she’ll be that much more amped up. I do feel bad for Mickie but I think she still has a great storyline coming with Vickie Guerrero who is an absolute heat magnet. The most over Diva versus the most hated ‘Diva’, should be great.