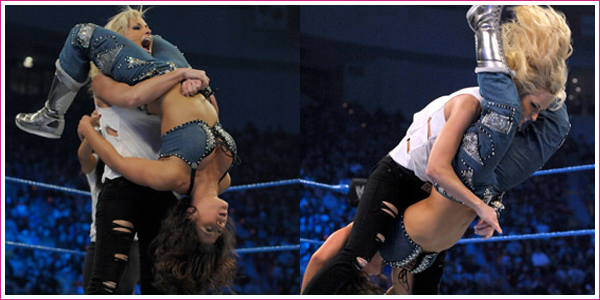 The Lost-like wheel of fortune stops on Michelle McCool this week, continuing the analogy that each week a different Diva is the main focus of the SmackDown storyline. The Women’s Champion, who recently celebrated 200 days with the gold, threw her hat into the race to prove just who the most dominant Diva is on the blue brand. But first, we see yet another Beth Phoenix vs Mickie James match — only three weeks into 2010 and we’re already repeating matches! Watch below:

After a lengthy recap of the previous weeks’ action, The Glamazon marches to the ring with great focus on her opponent who took her out the week before. As she enters the ring, Phoenix tries to go after Mickie almost immediately before the bell has even rung. The referee gets in between the two Divas until finally the bell rings and Beth runs at Mickie, who manages to duck and wrap her arms around Beth’s waist from behind. Phoenix hits her with an elbow to the face and headbutts her — the move pushes Mickie into the ropes, who uses the momentum to hit Phoenix with a forearm. Mickie follows through with a few more forearms before going for a spinning kick but Beth catches her leg and clubs her across the back, knocking Mickie to the ground. Beth applies a chinlock while clubbing Mickie over the head before hitting her with a kick to the stomach.

Phoenix continues to control, propping Mickie in the corner for a butt bump and then tries to pry Mickie out of the corner, who uses the ropes to help her momentum. Beth eventually grabs Mickie by both legs and slams her to the canvas. Phoenix applies a chinlock until Mickie begins to bite back, later Beth hits her with a backbreaker and a near fall.

Mickie begins fighting back with forearms before getting to her feet and hitting Phoenix with a lowdropkick to the leg, taking her off her feet. She follows through with a kick to the face which hangs Beth on the ropes, Mickie runs at Beth who picks her up and guillotines her off the top rope. Beth grabs Mickie with a running powerslam into the turnbuckles and hangs her in a tree of woe, shoulder blocking her in the corner. The referee begins to count out Beth and backs her away from Mickie so he can help her down. As his back is turn, she once again runs at Mickie and attacks her some more, once again the referee backs Beth away. She again attacks Mickie, this time with a knee strike causing the referee to call time and award Mickie the win via DQ.

As the bell rings, Beth still wants some more of Mickie until Team Lay-Cool, Michelle and Layla run into the ring. Beth stares down the duo before deciding to leave the ring altogether and leave Mickie at Lay-Cool’s mercy after Mickie kicked her last week.

Michelle uses the opportunity to lay in kicks to Michelle who is still hung in the tree of woe position. Layla helps her as they grab Mickie by the hair and swing her head into the bottom turnbuckle — unique and very cringe-y. Mickie, now off the turnbuckles, is helpess on the canvas as Layla wraps herself around James while Michelle knees her in the stomach and kicks her a few times. Layla picks up Mickie so Michelle can taunt her, but Mickie fights back, elbowing Layla and hitting Michelle with forearms. Michelle takes her down at the knee and waves her finger in Mickie’s face, telling her that “it’s not going to happen,” showing she’s firmly in control. Mickie again tries to fight back, with a forearm to Michelle’s gut and a jawbreaker on Layla but a knee to the head by McCool takes her out of commision. Michelle hits an impactful Faith Breaker on James and asserts her authority.

I think we’ve find a turning of the tide. As good as the last month or so has been, this week’s SmackDown was not as nearly up to par as we have seen in previous weeks, in my opinion due to the lack of storyline progression here. There’s nothing driving the feud forward this week, other than Diva A getting one over on Diva B which we’ve seen for the past two weeks. SmackDown has finally written into a rut and it’s stuck in it. Last week I noted that the writers needed to gear towards something now because the danger is we just go round and round in circles and lose momentum in what has been a great three-way feud. There is still time to salvage this, hopefully next week they will do something meaningful to drive things forward.

As for the match, it was the standard Mickie-Beth match and not anything to write home about. I don’t see their chemistry and though I admit, it’s gotten better in recent matches, I am in no hurry to see this match again. Which of course means we’ll probably see it in two weeks time.

Unlike last week, the soul and character was missing I think, perhaps due to the lack of talking parts on this week’s show and also the lack of Layla, who simply played henchwoman to Michelle.

Beth Phoenix’s indifference towards Mickie James, I think, rules out the chance of her turning fully babyface. I do expect we’ll see them eventually team up against Lay-Cool but likely in a ‘strange bedfellows’ tag team match rather than ‘Beth and Mickie on the same page’. I’d argue that this, while not exactly a championship caliber match, would be a good match to book for the Royal Rumble on January 31st. It’s too soon for this feud to culminate i.e. have a blow-off Women’s Championship match, but in the meantime we need something that can drive things forward and something that we can look forward to that will give the last couple of weeks meaning. Announcing that Beth and Mickie must team up at the Rumble to face McCool & Layla on next week’s SmackDown could provide two weeks of decent build before the eventual match. ‘Can Mickie and Beth co-exist at the PPV?’ type of a scenario.

While still a notch above what we usually see for the Divas, in the context of this feud — it’s been hot for a while but now it’s beginning to become a little bit tepid.