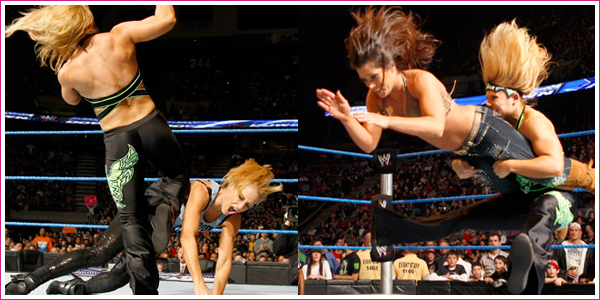 The first Divas match of 2010 ended in a fight for dominance for the SmackDown Divas, as three of the Divas tried to show the others who’s boss. But before that, we got to see another match between Beth Phoenix and Mickie James. It may be a new year but some things never change! Watch below:

Anyone who has followed this blog from the early days will know I am not a fan of Beth-Mickie matches so I can’t say I was looking forward to this one. Thankfully, it was kept short and sweet.

We begin with Layla and Michelle McCool [now with their own amalgamated nickname, ‘Laycool’] at ringside, lapping up Beth Phoenix’s entrance — complete with Beth-like headbands! I loved Layla’s attempt at doing the Glamazon pose. Mickie is out in her new jeans attire again, I guess this look is sticking, huh? Subliminal messaging for her country album, perhaps? Mickie has her emotions in control this week, last week’s knock off the announce table must have taught her that big girls don’t cry… or Beth Phoenix will fuck you up.

As the bell rings, Beth nudges Mickie straightaway signalling to a distracted Mickie, who’s looking towards McCool at ringside, that she should be focussing on her. Mickie hits Beth with some forearms followed by a leg-scissors attempt that Beth counters into a backbreaker. Near fall.

Beth throws Mickie into the corner but she manages to stop herself and uses the ring ropes to launch herself at Beth, going for another legscissors. This time, Beth throws Mickie’s legs over the top rope. On the apron, Mickie fights back with forearms and knocks Beth into the turnbuckle before going up top for a Thesz Press. Mickie hits a few more forearms but is distracted by Layla who has gotten up on the apron. Beth shoves Mickie into the ropes, where Michelle is just getting up on the apron. Beth runs at Mickie, but she uses the ropes to dropkick Beth. Beth runs at her again, this time Michelle is getting ready to kick Mickie from behind, she moves out of the way and Michelle inadvertently kicks Beth. Awesome facial expression from McCool when she realises what she’s done! Mickie with a quick rollup to end the match.

Layla storms the ring after the match and is fought off by Mickie until Michelle comes in and attacks her. Team Laycool double team Mickie and Beth makes the save, grabbing Michelle by the waist and throwing her across the ring. McCool runs at Beth who picks her up and runs into the turnbuckles with her. Meanwhile, Mickie rips the shirt of Layla’s back and attacks her before throwing her out of the ring. Beth now grabs Michelle into an overhead powerslam but then drops her to the side. Michelle’s long legs fly everywhere. Beth then kicks Michelle in the ribs for good measure.

Things get interesting here as the long time rivals realise that they just worked together. Beth begins to walk out of the ring, slapping Mickie’s hand non-chalantly but when Mickie’s back is turned, she creeps up from behind and hits her with the Glam Slam. Beth makes it clear that she’s a lone wolf and proves to be the dominant Diva of SmackDown… at least tonight.

Once again, I thought SmackDown was on point this week with great storyline progression and as we’ve seen in the past few weeks, lots of character progression for Beth Phoenix. It really does seem like just when you know what might happen next, they swerve us with her. I guess at this stage she’s more of a tweener than a heel or babyface. I like that the SmackDown writers have for once, successfully written for a character where she’s not black-and-white but has shades of grey. It’s very rare for the WWE Divas but I think they’ve done a great job with Beth.

Michelle and Layla came across really well tonight, selling the comedy without actually speaking which is probably a hard thing to do. This duo is really working.

Another good week for SmackDown and a great way to begin 2010.