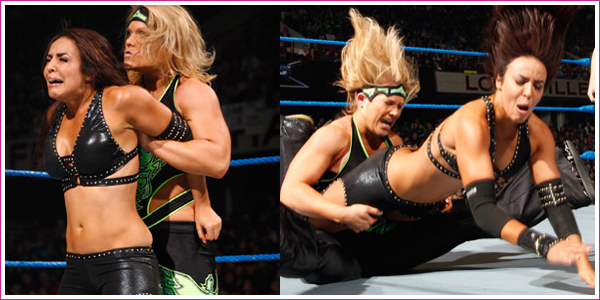 She may not be the priority in the three-way feud between Beth Phoenix, Michelle McCool and Mickie James but this week on SmackDown, Layla proved to be the dark horse in this storyline — the glue, if you will, that has held this feud together and that was never more apparent than it was on tonight’s show. Her fantastic acting, comedy chops and hard work in the ring have made her the perfect go-to girl for much of this feud. It’s not Michelle McCool that’s getting in the ring on a weekly basis and wrestling Mickie James and Beth Phoenix — it’s Layla. And if you ask me, it’s the teaming of Michelle and Layla that has helped the Women’s Champion break out of her box and show more charisma and personality than she has in the past several years. She may be treated like a jobber in WWE but watching her work this week, it became obvious to me that without her, this feud wouldn’t have worked half as well as it has and she deserves credit for it.

A few weeks ago, I likened the ongoing SmackDown storyline as a little bit like Lost — each week, the story seems to center around a certain character with the events unfolding from their point of view. We have had Mickie James and Beth Phoenix take starring roles in previous weeks and it seems this week was Layla’s turn.

It all begins backstage…

Once again we have a backstage segment with ‘Piggie James’ jokes, this time Team Lay-Cool unveil a pig trough for Mickie. Lame. Layla cutely gets some lettuce in her mouth with Michelle flicking it away. I’m particularly liking the underlying situation with Michelle and Layla with the latter playing the Gretchen Wieners to Michelle’s Regina George; Michelle, the leader of the group, kind of deflects everything onto Layla [“I think you annoyed her”]. It could play into an interesting feud should Michelle and Layla ever split up.

Next we have Beth vs Layla:

Beth makes her entrance first followed by a somewhat hesitant Layla, who by the way looks a lot like Halle Berry in Catwoman in that attire. Somewhat new fact about Layla — she’s Moroccan and fluent in Arabic, thanks Matt Striker! I love Layla selling her being afraid from the outset, wary of Beth Phoenix as she makes her entrance and does her signature pose on the ring ropes. All too often these girls have little psychology when it comes to stuff like that, they’ll come down to the ring all smiley-faced and happy as usual even though they have a big match ahead of them. Granted, this isn’t exactly a huge Michelle-Mickie type grudge match, but it’s nice to give that vibe of Layla being afraid of Beth and it paints Beth in a great light as well.

Even as the match is about to start, Layla tries to call out to Michelle on the outside of the ring to help her and begs Beth not to go through with the match. Nice touch. Layla extends her hand for a handshake but Beth grabs it and uses it to shoulder-block Lay to the canvas. Beth then hoists Layla over her shoulder, again Layla is screaming for her life in great comedic fashion. Beth circles the spot dizzying Layla before dropping her front-first.

In shades of last week, Beth kicks a fallen in the gut ala Michelle and Layla is sent rolling out of the ring. Beth taunts the Women’s Champion to get into the ring, instead Michelle — showing her Regina-ness — sacrifices her understudy by throwing Layla back into the ring, throwing her to the wolves as it were. This was a funny spot here, sort of like a horror movie where the creature drags it’s victim into it’s lair, Beth drags Layla by the leg who’s screaming and trying to reach out to McCool.

Beth grabs Layla by the hair but the former Diva Search winner uses it to her advantage with a low dropkick to Beth’s knee followed by a kick to the side of the head and a forearm. Beth throws Lay into the corner and charges at her, Layla moves out of the way and begins laying in some lovely kicks on the Glamazon and then jumps on her back and begins clubbing her. Nice tactic given the stature of Beth, it seems like a viable way to have the underdog try to take advantage. That is about all the offense we see from Layla in this match but I think her moves looked crisp and believeable.

Beth snapmares Layla off of her back and the grabs her from behind and picks her up for the Glam Slam. We see a hilarious close-up of Layla crying and screaming ‘Noooo’ before she’s dropped by Beth. The Glamazon picks up the win.

After the match, Michelle gets into the ring and Beth tries to go at it with her but Michelle says she just wants to check on Layla. Layla grabs Beth by the feet and Michelle kicks her in the head. The two double team Beth until Mickie James comes in for the save. Michelle and Mickie begin trading blows and Michelle hits Mickie’s head into the turnbuckle, meanwhile Beth grabs Layla and throws her into Michelle and the two fall through the ropes and out of the ring. Mickie is in the corner, she and Beth have a little glance as for the second week in a row they’ve worked together. As Beth inches closer, Mickie hits a beautiful Long Kiss Goodnight taking down Beth.

Once again I think this was an exceptionally strong week for SmackDown with Layla, who isn’t necessarily a major player in this feud, getting some shine this week. I truly believe that she has been a great asset in this feud. While she’s not considered an experienced wrestler, she has more than held her own in the ring against the veterans and even shows that she has great offense. I’d venture to say she has the best kicks of any Diva in the WWE right now, they are just on-point. She plays her role so well both in the storyline and in terms of what’s asked of her by the Creative Team — whether it be matches, acting, comedy — she always delivers. She has helped inject life and personality into a feud that perhaps without her, wouldn’t be as exciting. She’s definitely brought out a new side in Michelle McCool. It’s a shame that WWE doesn’t see her as more of an asset because she is a work-horse and a reliable, consistent Diva. I’d love to see her maybe turn face and feud with Michelle McCool later in the year — I don’t know if WWE thinks highly enough of her to give her a title shot/title run but she can only get better. This was definitely her night and it opened my eyes to just how much of a hand she’s had in selling this feud.

Mickie’s receipt on Beth for last week was perhaps a little obvious but it worked nonetheless. As I said, her kick on Beth was fantastic. The chemistry between Beth and Michelle is intriguing also, though I do hope they’re kept apart for a while longer before they truly come to blows.

Solid week from SmackDown though in terms of progression, it’s sort of a holding pattern from the week before. The girls need something to work towards now i.e. a pay per view match or a featured Women’s Championship bout on SmackDown.