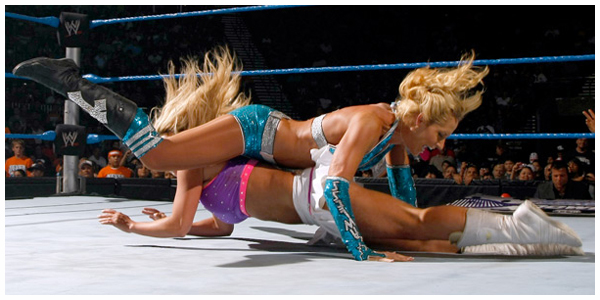 This week’s Friday Night SmackDown boasted a big Women’s Championship match between Layla and Tiffany. When spoilers hit the web this past Tuesday of a swerve, well quite frankly, it should have come as no surprise. WWE has a habit of advertising one thing and delivering another. Instead, we get Michelle McCool defending the Women’s Title against Tiffany.

In a less than 8-minute segment, it sure is funny just how much they crammed in… Watch below:

We open with the challenger walking down the corridor with her Blondetourage teammate, Kelly Kelly. They bump into Rosa Mendes and exchange hellos, despite Kelly facing Rosa in the ring a few weeks ago. So Rosa is a babyface now? Whatever. I don’t get these random workout scenes. Just put out a workout DVD or axe her. Seriously. What’s the point anymore?

Lay-Cool are out first to the ring and it should probably be a big, glaring neon sign that things aren’t going to be as they seem when Michelle, too, is in ring gear despite Layla being the advertised combatant.

Vickie Guerrero comes out and announces as co-Women’s Champions, it will be Michelle defending the belt tonight as Tiffany’s chances of winning hit rock bottom. In kayfabe, it seems plausible for Tiffany to defeat Layla to become champion but Michelle? The commentators play up that Michelle is a beast in the ring and this match just got very one sided.

Michelle, not taking Tiffany at all seriously, does a little workout of her own in the ring. Is this a recurring trend on SmackDown or what? I really hope this is all just build up to announcing a Divas workout DVD… Anyway, Michelle is doing press ups, paying no mind to her challenger. However, as she sits up, the ballsy Tiffany hits her with a front dropkick. Great way to start the match on Tiffany’s part!

Tiffany wastes little time, kneeing Michelle in the gut and then hitting her with forearms into the corner. Tiff then begins stomping a mudhole, as old JR would say, in the corner. Tiffany tries to pick up Michelle but gets pushed back. Tiffany then picks her up and perches her on the top rope.

Tiffany and Michelle exchange blows as Tiff climbs the ropes to join Michelle. This spot looked a little sluggish and it looked like it took too long for them to get into superplex formation. There’s a few half-hearted blows exchanged to keep the heat alive, but it all pays off in the end as Tiffany hits a superplex — albeit not a great one — on Michelle. Wow! When was the last time a Diva put a superplex in her arsenal? Great spot, despite less than perfect execution.

The challenger goes for the pin, and nearly gets it but McCool kicks out. Tiffany whips herself off the ropes but Layla from the outside grabs her foot. Kelly now interjects, hitting Layla with forearms before being shoved into the barricade. As Layla turns around, Tiffany hits her with a nice dropkick through the bottom ropes and screams, “Stay down!”

Tiffany climbs the ropes again, going up on top but a recovered Michelle hits her and she lands in an awkward position on the top turnbuckle. McCool has her in perfect position for the Faith Breaker and it’s all over. Lay-Cool retain.

Cutting their celebration short, GM Teddy Long appears on the titantron telling Lay-Cool that there’s only room for one Women’s Champion on SmackDown. They need to decide who wears the belt or next week, he’ll do it for them!

What an action packed 7 and a half minutes. We got all of the Divas crammed in there and even Vickie and Teddy! All to the detriment of the match, however.

There were like 3 spots in total in this match. For a Women’s Championship bout it wasn’t long at all. It seems over the past two months or so, the matches on SmackDown are getting shorter and shorter. What gives? There was a time when 5-6 minute matches were the norm on SmackDown, and I can even recall a great, long bout that lasted even longer between Michelle McCool and Mickie James a week before the latter’s release.

That said, I thought this match had its moments, for sure. Tiffany, once again, in my opinion, proved to be a shining star. She comes out as a peppy cheerleader but when she steps in the ring, she’s all business — she’s often underestimated by her opponents, but she gives as good as she gets. The way she kicked off the match, with the low dropkick was great. I was also impressed by the fact she did the superplex. Her moveset is very unusual for a Diva, it’s more manly. I like it. She’s a power-lifter and she’s able to pull off these moves [the superplex needs a little more work though], so more power to her. I think she could really establish herself as a more feminine, girly Beth Phoenix-esque type. She has this Beth-esque stature and in the ring, she’s hard going. But when you see her come out and the way she greets the fans, she’s more of a Kelly Kelly. I see a real mix of the two in her and you know what? It’s kind of unique. Especially when so few Divas these days have a distinguishable character trait. She, in my opinion, is breaking out of the mould of being a generic babyface and has a quality there that if amplified, could be the basis of her own gimmick and character.

As for there only being one Women’s Champion… it seems like a random time to do it. But then again, there hasn’t been much storyline in the past couple of weeks. Perhaps this will be the start of a real storyline on SmackDown? Will Lay-Cool now feud over the belt? Will Layla turn face? It seems like it. From what I read, AJ Lee is coming onto SmackDown as a heel, perhaps they have estimated that Layla will turn face? It’s going to be interesting and exciting to see where SmackDown goes next due to this latest development. I think, and hope, we have a real storyline on our hands now.

In all, I thought this week’s SmackDown was okay. I wish the match was longer. But I was impressed with what I saw from Tiffany and I enjoyed the storyline introduction for next week.

PS: Matt Striker working in ‘Totes McGotes’ into his commentary = +1.