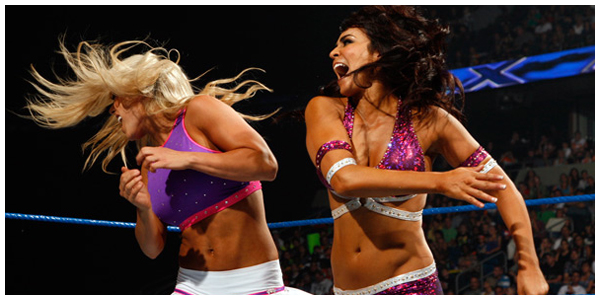 For the first time since becoming Women’s Champion, Layla finally gets herself a singles match on SmackDown, facing off against another Diva that has been impressing of late, Tiffany. On paper, this was an exciting opportunity for both rising Divas to show what they can do in the ring. How did it play out in execution? Watch the match below:

It’s great to see a fresh, new match up on SmackDown especially given the shallow talent pool that the brand has at the moment. We’ve only seen Tiffany in singles action against Michelle thus far, so I have been anticipating these two squaring off for a while.

Lay-Cool are out first with their NXT Rookie, Kaval in tow. As Layla and Michelle McCool take off their hoodies in their signature entrance, they toss it over Kaval’s head as if he were a coat rack. As they approach the ring, Lady McCool has the bottom rope held down for her by Butler Kaval as she enters.

It’s promo time now. The duo make Kaval hold their belts before addressing the crowd. Lay-Cool mock the crowd, yadda, yadda. Oh hey, Michelle’s parents are in the crowd. Kelly’s mom is too, but apparently she’s not important enough to be shown on camera. Oops. More mocking the crowd.

Tiffany Tiffany is out next with her own personal manager for the night, Kelly Kelly — they are dubbed the Blondetourage by Matt Striker.

The match kicks off with Layla delivering a hefty slap across Tiffany’s face but the rookie Diva fights back with some vicious forearms. We’re already off to a nice, aggressive start! Tiffany tries to whip Layla into the corner, but she reverses — Tiffany manages to catch herself in the corner and hoists herself up using the ropes with her legs now on Layla’s shoulders. Layla grabs her legs and throws them over the top rope and Tiffany lands on her feet on the apron. Layla screams at Tiffany and grabs her by the head but Tiffany fights back with another forearm and a shoulder block through the ropes. Tiffany tries to climb the ropes but Layla delivers a beautiful kick as Tiffany takes a bump to the apron.

Layla drags Tiffany into the ring by the leg and goes for a cover but Tiffany kicks out. Layla now applies a submission move on Tiffany, wrapping her legs around her head. Meanwhile, Matt Striker inadvertently reveals that he watches teen drama for girls, reciting the tag line for Pretty Little Liars. “Never trust a pretty girl with an ugly secret,” he says. Back in the ring, Layla locks in her submission ever harder, using her hands to elevate her — really nicely done. Layla then drags herself, and Tiffany, to the ropes where she uses them for extra added advantage while the referee checks on Tiffany.

The referee eventually cottons on and breaks up the illegal use of the ropes but the damage is done to Tiffany. Layla goes to pick up Tiffany but this time, it’s the blonde who delivers a mighty slap to the Women’s Champion. She follows through with an atomic drop and some big clotheslines. Tiffany whips Layla into the corner and climbs the ropes, delivering some shots to Layla before being thrown off the turnbuckles. Layla then tries to take control but walks into a small package and just about has the match won but Layla kicks out at the last second as McCool screams on the outside of the ring and gets up on the apron.

As Tiffany shoves Michelle off the apron to the cold, hard floor outside, Layla manages to regain her composture and blind sides Tiffany with a devastating Layout for the 1, 2, 3.

I actually went back and watched that finisher a few times because it really did look deadly and like it took Tiffany’s head off. Just go back and watch that again. Perhaps the best that move has been executed to date.

So what’s the verdict on this match? Despite being on the short side, I thought both Divas were extremely competent and gave as good as they got. I loved the aggressive start to the match with Layla’s slap and Tiffany’s forearms — it set the tone for the match which saw more aggression including Layla’s lovely headscissors submission.

Both Divas worked really well together and despite the length, there were some really good spots here. Tiffany really impresses me in the way that she delivers her moves — even just watching her forearms, they look so believable and well done. She’s not afraid of being aggressive in the ring and her moves connect with conviction. Her clotheslines, too, were well done.

Meanwhile, I thought Layla did a great job in leading Tiffany into a great match and set the tone. She can also be very aggressive and cunning in the ring and her spots including kicking Tiffany off the turnbuckle was nice. She really does have some of the sharpest kicks amongst any Diva I’ve ever seen.