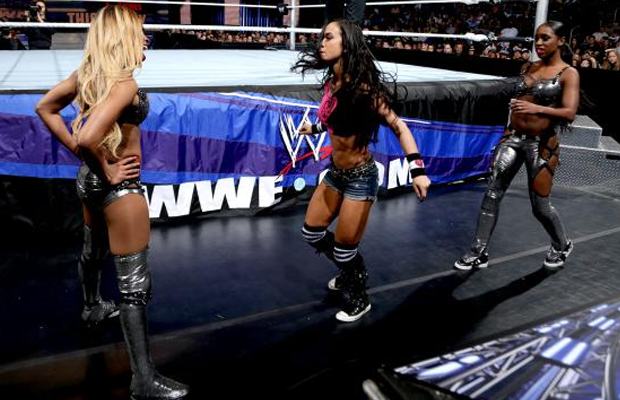 Hello everyone, and welcome this week’s (slightly late) edition of the SmackDown Redux!

This week on the blue brand, Vickie Guerrero gets a measure of revenge on the Divas Champion AJ Lee after their singles match on Monday, as she puts her in a handicap match against  Total Divas Naomi and Cameron. This, of course, follows AJ’s weaseling out of facing Naomi on Wednesday’s Main Event.

Can AJ beat the odds and give her Survivor Series team some momentum going into Sunday or will she be another victim of the numbers game? Check out the match below:

The Funkadactyls are out first, sans pompoms. AJ comes out next with Tamina Snuka in tow, and she does not look happy with the situation she’s been put in. The official signals for the bell and our Divas match is underway!

The Funkadactyls immediately go on offense, taking AJ down with double team maneuvers, sending AJ scrambling out of the ring. Tamina tries to insert herself into the match, but gets knocked on her ass by Cameron and Naomi for her trouble.

The Funkadactyls try to keep up their team assault on the champ, but Tamina gets a hold of Cameron and takes her out, leaving Naomi to deal with AJ.

With Naomi distracted, AJ gets the jump on her, taking her down with a neckbreaker for a near fall abnd follows up with a stalemate into a chokehold. Naomi fights out of the submission and levels AJ with a enziguri for a near fall of her own, prompting Tamina to get involved once again. Unfortunately for Tamina, Cameron has gotten her second wind and takes her out. AJ sees Cameron trying to make her way back into the match and nails her with a knee lift, but turns around into a Rear View from Naomi, which nets a win for The Funkadactyls.

Thoughts: A nice filler match going into Survivor Series. Nothing too spectacular, but it beats the hell out of Diva musical chairs.

That’s all for this week’s redux, boys and girls! Until next time!