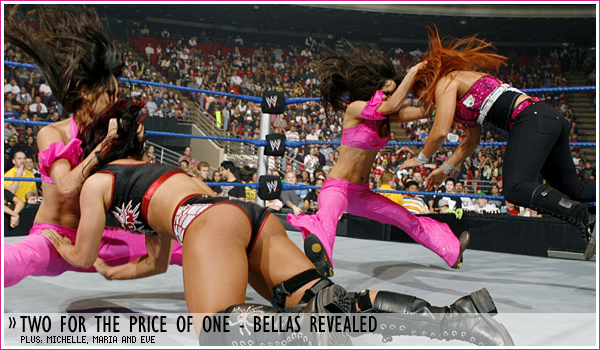 Last week on SmackDown: The Bella Twins were revealed as Brie beat Victoria in one on one action. And Michelle McCool continues to be “frenemies” with Maria.

Thoughts & Reactions
First of all, welcome back to the Redux feature at Diva Dirt! Our weekly Raw and SmackDown Reduxes have been in limbo for the past few weeks, I’ve been so busy and haven’t had a chance to write the column. But things seem to have settled down now and I’m back in a routine so the Reduxes are back too! I felt particularly compelled to write a review of last week’s SmackDown because I felt it was an awesome show Diva-wise. So let’s take a closer look…

Welcome to Friday night folks, the home of the best Divas action you’ll see each week. There are a lot of fans out there who watch Raw every single week and don’t watch SmackDown at all. Whether they go out on Friday night or they agree with the mantra that SmackDown is the B-show, who knows. But if you’re one of those people and you’re reading this, I strongly urge you, as a Diva fan, to start tuning into Friday Night SmackDown. Last week’s SmackDown was one of the best of the year and trust me, there’s been some great episodes to choose from in ’08. For storyline purposes, I would rank last Friday’s show very highly. It’s been a long, long time since the Divas on either brand have had a fully fledged storyline and that’s exactly what’s unfolding on SmackDown at the moment. In the main plot we have Divas Champion, Michelle McCool and Maria. And in a sub-plot we have the Bella Twins. It seems that WWE is hinting at a third plot too, Eve’s journey to become a wrestler. There’s a little something for everybody! SmackDown has really upped it’s game and all of our gorgeous SmackDown Divas are getting decent ring time and promo time each week.

Let’s start off with Michelle and Maria, who will go head to head this coming Friday for the Divas Championship. This plot is very intriguing to me and I haven’t really written much about it thus far, but for the first time in a long, long time we have an actual Divas storyline and one that is rather unpredictable at that. Since the Mickie-Trish feud going into WrestleMania 22, there hasn’t really been a big Divas storyline that’s festered over weeks and that’s exactly what this has become. However unlike that feud, which was predictable – I mean we all knew Mickie would turn on Trish – there’s no real indication in this one. For the past few weeks fans have been speculating that Michelle’ll turn heel after reading spoilers, however when the actual show airs, her comments – while sort of mean – don’t come across as too heel-ish. Despite implying that Maria is dumb, Michelle still manages to come across as a friendly face. So it’s anyone’s guess if Michelle will actually turn heel. Because to be really honest, I have no idea where this is going and you know what… I love it!

As for the actual segment, I thought Michelle looked smokin’ hot from head-to-toe, I loved her look. Her hair looked fabulous. I remember a few weeks back I said that Michelle’s line delivery was almost robotic and she had no charisma – well I’m pleased to say that I think she came across very well in this segment. I liked the little quip at the end to Maria, “Don’t get carried away now”, sounded good. Her acting was a vast improvement. I also thought there was some irony to Michelle’s line, “She’s a Playboy covergirl and that’s what she does best…”, because that sort of describes WWE’s whole hiring process when it comes to Divas. And it actually rings true for Maria, that is what she does best. Bless her cotton socks but she’s not the best wrestler, but extremely popular nonetheless for other things she’s done.

I think this is the second time also that WWE has hinted at getting Eve in the ring and I’m looking forward to it, more the merrier, I say! A few weeks ago there was the backstage segment with Vickie and now with Michelle. It’s great to see the writers building Eve up to her eventual in-ring debut rather than just thrusting her into the ring and going, ‘Hey, the backstage interviewer wrestles now’. By having her do these segments saying she wants to get in the ring, she wants to train, they’re building her up for that eventual in-ring debut. SmackDown has proven that you can have a large Divas roster but find a way to use them all on a weekly basis and make them relevant to the product, so Eve’ll fit right in.

The match between Victoria and Brie was once again, good. They’ve had quite a few match-ups now and this one was just as good as the others. I think the big pay-off here was the twin reveal, which was nicely done. I liked the symmetry of the two sisters performing the same moves at the same time! I guess we’ve got a built-in feud now: The Bellas vs the BFFs. Plus we also have that underlying storyline teaming the twins with Carlito & Primo. I like the idea of these four being one big Latin group, SmackDown does have a huge Latin demographic so they could get crazy over.

Really fun week, last week. This week the attention turns to the Divas Championship, Michelle vs Maria. I wouldn’t be surprised if we get two Divas matches with the tag team match also. In which case, the show would be loaded! Looking forward to it!

Eve: I think she’ll make a great addition to the division.

Maria: I’m hoping Maria pulls it out of the bag in the title match.

Natalya: Not much to add.

Victoria: Not much to add.

The In-Between: The rest.