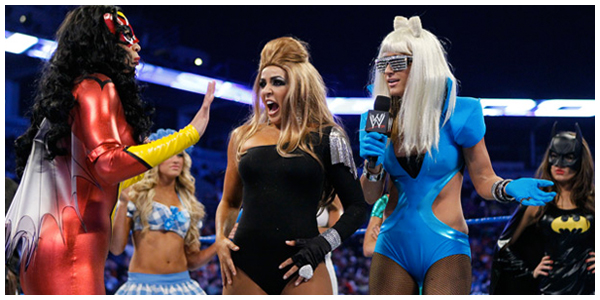 It’s not Halloween without the Divas breaking out a costume — or eight, and that’s exactly what we saw this week on SmackDown. Some were uninspired (Batman & Robin? Yawn.) and some (Lady Gaga, Beyonce) tried to capture the pop culture of the day, even though WWE is about a year behind in what’s relevant.

A rarity for the Divas, they each get their own entrance in order to show off their costumes. The Bellas are out first dressed as Batman and Robin. Out next is Alicia Fox dressed as Cleopatra; a valiant effort but not quite as breathtaking as Asha on last night’s episode of ‘Outsourced’. Kelly Kelly, rather predictably, goes for a ‘sexy’ Little Bo Peep costume. Rosa Mendes is a leprechaun? Doesn’t she realise Hornswoggle is in the ring and likes to sexually assault Divas? Former Divas Champ, Melina is Spiderwoman and then it’s the pièce de résistance: Lay-Cool as Lady Gaga and Beyonce. You’d think they’d go for the matching Telephone outfits, but nope — Layla is Beyonce in the two year old ‘Single Ladies’ video (which is what we suggested for Alicia Fox last year and sorry Lay, it would’ve suited her much better) and Michelle is Gaga in the equally old ‘Poker Face’ video. Still, A for the effort of trying to do something relatively current.

Onto the costume contest now, but before Teddy Long can begin his officiating, Michelle takes to the microphone and pretty much says Lay-Cool should win and save us from the laborious task of watching each of them shake their rumps and embarrass themselves. Melina takes exception and argues with Lay-Cool only to be hit with a zinger from McCool. “Why are you even dressed up? You’re scary enough as it is.” I giggled. Sorry Melina… Layla shoves Melina but before she can fight back, Hornswoggle intervenes and knocks poor Michelle on her butt in fright. Didn’t that little sex pest troll learn from last time not to mess with Michelle?

The costume contest is then turned into a match and we have Melina, The Bellas and Kelly taking on Lay-Cool, Alicia and Rosa. Wait, wasn’t Rosa a babyface the last time she was on SmackDown? And didn’t she hate Lay-Cool? Okay, let’s just gloss over that…

Batman Bella and Layonce are in the ring first and Lay is feeling childish, doing the ‘Singles Ladies’ dance before getting clotheslined down to the canvas by Batman. Yeah, you don’t wanna mess with those Bellas… they’re on fire at the moment. Layonce screams and runs to her corner tagging in Lady Gagool. Michelle is too busy checking on Layla and when she turns around is hit with a double team clothesline from the Bella, who by the way, may be the only Divas who have had a clean victory over Lay-Cool in months. Gagool is apparently frightened off by a double clothesline and tags out to Alicia in a fright. Isn’t she supposed to be a multi-time champion?

Cleolicia is tagged in and handles her business, confidently hitting Robin Bella with a knee and whips her into the corner but Robin reverses and hits a jumping snapmare on Cleolicia. Robin tags into Spider-Melina and they hit a double back-elbow to Alicia. Finally, the pace of the match picks up as Melina runs the ropes and does an unorthodox splits-into-kick directly into Alicia’s head. Melina then begins wrenching at Alicia’s arm and hits that beautiful splits-into-armdrag that we saw on Superstars a couple of weeks ago. Breathtaking move.

When we return from commercial, Batman Bella is in the ring with Leprechaun Rosa but not for long as Batman Bella tags out to Little Bo K2eep. Kelly hits a forearm on Rosa and shoves her pacifier into her Rosa’s mouth before hitting her with a Thesz Press and smashing her head off the canvas. Kelly hits a neckbreaker on Rosa and goes for the cover but its broken up by Gagool and in come all the Divas as this thing breaks down. Cue all the Divas fighting and then clearing the ring, leaving Kelly and Rosa to finish the match. K2 and it’s all over.

Uninspired, lame and boring come to mind. All the Divas action on Raw and SmackDown can pretty much be considered a throwaway this week as no doubt, it’ll have no semblance on storylines. At least the commentators tried to work in at the end that all the other Divas were after Lay-Cool’s Divas Championship, but at the end of the day, this was what it was. A lame Halloween themed segment. Props to Melina for actually trying to get fans enticed and into an otherwise forgetful match; her two spots were the highlight of the segment.

I guess you could say we were caught in a bad romance SmackDown?