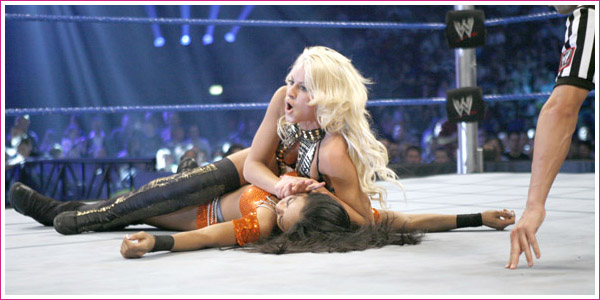 In her real final match on SmackDown, Divas Champion Maryse offered Gail Kim a title opportunity, after the rising SmackDown Diva gained a non-title victory over her last week on the show. Watch below:

Even though she was drafted to Raw two weeks ago, it looks like the Draft won’t officially take place until after WWE’s European tour (which wrapped last night) and this Sunday’s missable Backlash pay per view. So how did Maryse celebrate her final night on SmackDown? Much like Melina on Raw, she celebrated with a title match against her rival, Gail Kim. But unlike Melina, there were no emotionally-charged tears from the departing Divas Champion.

First of all, while the booking behind the Melina-Beth match on Raw was kinda ‘throwaway’ (even though the match was fantastic), the booking behind this match works. I’m actually really glad that after their recent rivalry and Gail’s non-title win last week, they gave her the opportunity to have a title match. So in that sense, the European tour worked in this feud’s favour, as if they were back in America, Maryse would be travelling with Raw by now. Following last week’s SmackDown, I felt Gail deserved a title opportunity for the Divas Championship because she had a victory over Maryse and I thought they could get away with it by having it at Backlash, which as a pay per view is ‘neutral territory’. However with the new rosters not taking affect till next week, this works too.

Unlike a lot of you guys, I wasn’t a big fan of their match last week on SmackDown. Looking back on it, it wasn’t that bad but it wasn’t memorable, I think is a good way to describe it. If I look back in a few months time, that match won’t jump to the forefront of my mind. I just thought I’d clarify that.

This week, while the match was shorter compared to last week, I felt it was a more polished match. Some spots in last week’s match didn’t necessariily work or looked botched but this week, I felt that such spots worked much better. I wish this match had been the same length as last week’s, however. I think this week’s match was ever-so-slightly better, however again, I don’t think it’s a memorable match. It won’t stand out for me in a few month’s time. There was good work, good chemistry but unlike the Beth-Melina match on Raw, I won’t be raving about it in a few months time.

Gail’s jump through the ropes into an over the top rope roll-up worked much better this week, it looked seamless. The crossbody was much better this week also. I wish we got to see some of the spots we saw last week incorporated into it; Maryse’s backbreaker for one and Gail’s diving neckbreaker. I loved Maryse’s aggression though, the way she repeatedly smashed Gail’s head into the mat and then wiped the mat using her head… for some reason was unintentionally hilarious; I think I was imagining Gail’s movements almost akin to a mop.

This week’s ‘Gail Kim big spot’ comes in the form of a hurricanrana which was well executed and got the crowd to react.

I really liked the end of the match actually, with Maryse attempting to walk out on Gail. Very Maryse-esque, she’s never done it before, but I wouldn’t mind seeing it in future. This of course sets up Gail throwing Maryse back in the ring and Maryse capitalising in the time it takes Gail to get back in the ring. Again, a very aggressive and believable neck-snap on the middle rope and then some more aggression by Maryse, as she drags Gail – not by the arm – but by the hair and sets her up for the French Kiss DDT. Nicely executed, great selling. A good little match.