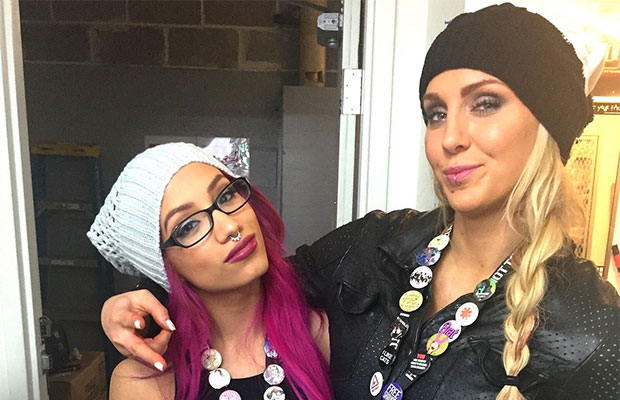 Starting off the week, we saw some of our favourite ladies on the squared circle pay tribute to the late and great Muhammad Ali:

"If you even dream of beating me, you'd better wake up and apologize"
Rip to the greatest. @MuhammadAli pic.twitter.com/mUQRnF8YQE

After the huge story on Beth Phoenix and Edge having their second child came out, the Queen of Harts Natalya wished the two well with this fabulous photo of the Divas of Doom:

The Women’s Champion Charlotte shared this great “BFF Reunion” pic of herself and Sasha Banks. The Boss, of course, had a great response:

The wonderful Renee Young finally properly joined Snapchat (on a more regular basis, that is):

During their very entertaining time at Wizard World, WWE shared the moment Nikki Bella’s boyfriend John Cena sneaked his way to her signing to give his girlfriend a kiss:

Only one man gets to skip the line to see Nikki @BellaTwins at @WizardWorld…AND HIS NAME IS @JohnCena! https://t.co/mnqOh5SGFM

The Women’s Champion Charlotte got a little creative as she shared her very own workout playlist on Spotify this week:

NXT rookie Liv Morgan celebrated her birthday this week and received some great well wishes from her pals online:

There's no coincidence today is @kanyewest birthday, my birthday, and @WWENXT #TakeOverTheEnd ?

Happy birthday sis. Ya gettin old yo. Very proud of you ?? @YaOnlyLivvOnce

SHE DID IT!!! MY LITTLE SIS GRADUATED FROM UNIVERSITY!!! I'm so proud of you @chanti_c. What a huge accomplishment, you worked so hard and you have made me the proudest sister in the world. We have a bond like no other and the love I have for you is greater than you can ever imagine. Life has huge things coming your way sis, I can't wait to see where life brings you next??????

NXT’s very own Billie Kay and Peyton Royce answered plenty of fan questions in this Facebook Q&A that took place this week:

Natalya shared this wonderful photo of herself with her father Jim Neidhart as well as her husband Tyson Kidd (whom is rocking Naomi’s wonderful merch):

family is everything and together we can get through anything ?????? pic.twitter.com/Wg0nLMg0QL

Some of our favourite women wrestlers such as Natalya shared their thoughts on the big battle between Asuka and Nia Jax at NXT Takeover: The End:

Fans captured Izzy and Sasha Banks’ reaction to Bayley losing the title to Asuka, as featured on the latest episode of Breaking Ground:

After over a year of husband Tyson Kidd undergoing surgery, Natalya shared her gratitude with his doctor on Twitter:

Thank you @tghcares and Dr Uribe for the incredible care and support over the last year. We are forever grateful. pic.twitter.com/hq0ohDQrUT

The longest reigning Divas Champion Nikki Bella hosted a Q&A on her Twitter profile during the season finale of American Grit. Here she discussed things such as a potential new finisher, her feelings towards AJ Lee, and her favourite women currently on NXT:

I do love this ? https://t.co/RTwNPEcqzr

I do, we had great chemistry and she was so entertaining! #AmericanGrit

Trish Stratus happily shared this picture of her match against Mickie James, as seen in WWE’s 100 Greatest Matches book:

That night we suspected we delivered something for the history books, well, my friend, looks like we did just that ? pic.twitter.com/IIGEpkOQ7L

Natalya and her husband Tyson Kidd spent the whole of Friday with their nephews as they all played with Lego and went to the aquarium:

Enjoying a beautiful day with my nephews Lachlan and Maddox at the #ClearwaterMarineAquarium #RescueDolphins ? pic.twitter.com/DaaxAu9uCE

And to end the great week we had, the likes of Nikki Storm, Nia Jax and more wished Deonna Purrazzo a happy birthday this past week: