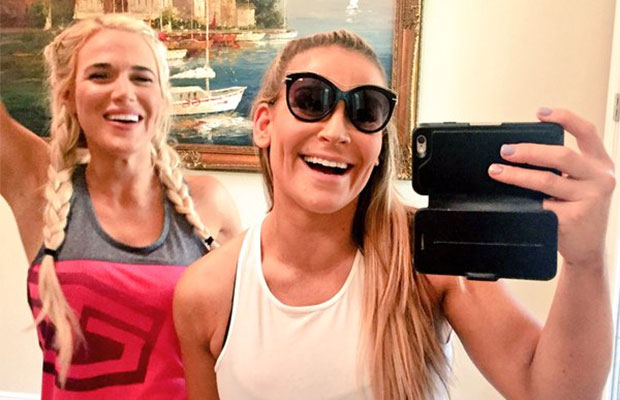 Ahead of her title defense against Natalya at Extreme Rules on Sunday, Women’s Champion Charlotte posed with her title and a Stone Cold Steve Austin t-shirt for a wonderful selfie in which the Rattlesnake himself replied:

The President of TNA herself, Dixie Carter, arrived at Sony Pictures in Mumbai:

At @SonySix in Mumbai for very exciting meetings. Don't forget to watch @ImpactWresting in India on NOW! pic.twitter.com/AWit8gy8fK

In addition to the new tank and t-shirt from last week, the BO$$ herself Sasha Banks has another tank top added to her merchandise line

The lovely Brie Bella began an auction for the attire she wore at her very last WWE show, Wrestlemania 32. The bids reached over $2.6m (no, seriously):

My Wrestlemania 32 ring worn gear is up for auction! All proceeds go to @HumaneSocietyNY ?? https://t.co/6WCoSkImt3 pic.twitter.com/Zs2FyXsBQr

Natalya posted this adorable selfie with her husband Tyson Kidd and their cat:

Bayley and Carmella have fun in a photo booth while attending a charity event this past weekend:

Eden discussed her departure from WWE on her blog:

Alas my blog is up! Read about my WWE departure and some of what the future holds…https://t.co/3VTfckAhqv pic.twitter.com/LaiiMu0N14

After hearing the news of the brand split and live editions of SmackDown, former NXT Women’s champion Bayley took to Twitter to hint at a potential main roster debut:

The Bella Twins uploaded a sneak peak at their first designs for their Birdie Bee clothing brand:

#Repost @birdiebeebrand ??? Here's the sneak peek! One of our first sketches. What do you think!?! More to come! ?

Natalya celebrated her friend Naomi’s t-shirt by posing in a selfie with the merchandise on:

Renee Young displayed her support for Red Nose Day on her Instagram page:

It's #Rednose day today! Laugh. Give. Save a kid! Get your red nose today to get in on the action!

Natalya took a fabulous selfie with the newest addition to the Total Divas cast, Lana, as the two filmed for the show’s sixth season:

After her last night in WWE, Eden took to Twitter to post this adorable picture from backstage:

My work here is DONE! Last night on Smackdown! To shop my entire look (on sale) head to my Instagram! #liketoknowit pic.twitter.com/pTm6Ag57E5

Former Intercontinental Champion Zack Ryder found an incredibly sweet picture of himself and his girlfriend (the recently injured Emma) from the Hall of Fame 2016 in a Power Wrestling magazine:

A few of our favourite women of wrestling, including the Bella Twins, Naomi and Carmella, wished the Queen of Harts a happy 34th birthday:

Happy Birthday to "THE QUEEN OF HEARTS" ??thank you @natbynature for always being a true friend pic.twitter.com/WjJnwKTjDm

And of course, this adorable exchange between Natalya and her husband has to end this week’s edition…

You're my best friend, too @KiddWWE. There's NO one like you. I'll always have your back. (So will the cats!?) https://t.co/nHnHsDJTDZ