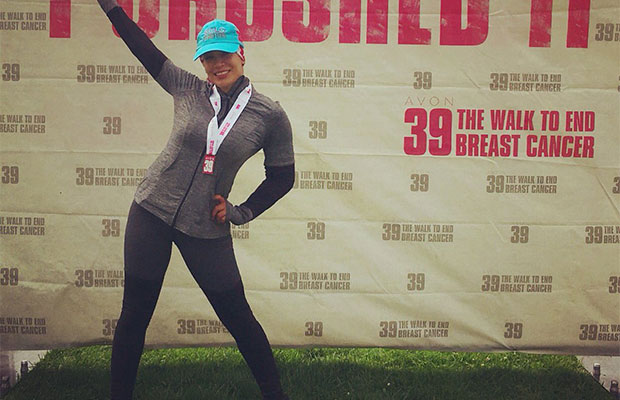 The Lass Kicker Becky Lynch hyped up Backlash in the punniest way she could:

I'm taking that title next week. No bull. #Backlash pic.twitter.com/1Z4qiPmCGX

Eeeekkkk I'm so excited this is my first launch for @nemfashionstore and we're just about to sell out of our sunnies! I love you all ?????

Emma hinted at a potential return to the RAW brand:

I've got some notes for every women in this division to take down! #RAW

Mickie James finished her journey to becoming an official Floridian this week:

Well it's official… The moving truck left a few hours ago… Come Monday @MagnusOfficial D & I will be #Floridians #VAProud #InMyFeels ?

Little Max Stratus started his first day of school – and he looks ever so adorable:

Max was pretty excited about his first day of school this morning! He starts in the Casa classroom today – or as he put it, in the big kid classroom #butyouarenteventhree #growinguptoofast #montessori #firstdayofschool #ootd ?: @zara ?/hat: @hm ?: @nautica

As did Ashley Massaro’s little kid:

Well, this morning is the first day back 2 school 4 Lex-11th grade! #???Time flies! I miss her already! Can't believe the summer is over!??

Nikki and Brie Bella continued their work for Birdie Bee:

Some of the amazing women that we worked with tonight! Sad we forgot to take the pic earlier with everyone! But so empowering talking with such amazing, strong women! And can't forget our amazing guy makeup artist Zac who made everyone beautiful :) #birdiebee #womenempoweringwomen #womenempowerment #inspire #motivation #rolemodels

Bayley boasted about her dream of being a video game character coming true:

From my days of playing WCW Thunder, WWF No Mercy, WWF Smackdown (Know your role, Shut your mouth, just bring it) to being IN the game. #WWE2K17. ??

Michelle McCool threw some shade at WWE with this tweet:

The Bellas, alongside their family, spoke with Good Morning Arizona on their Facebook page to promote Total Bellas:

The ‘Total Bellas’ are here! Before you catch their new show on E! next month, get some behind the scenes dirt with #GMAZ!

…Here a fan shared the part where Nikki spoke about Melina, and the Paparazzi Princess was more than happy to hear what she had to say:

Thank you for sending me this! Having Nikki say that means so much to me. I want to hug the @BellaTwins faces off!?? https://t.co/LNlsoMVLZS

Last night I'm minding my own biz and @CrazyMaryDobson attacks me!! Good thing I can handle myself #DetroitGrown ??? pic.twitter.com/Io09yf4TsC

So happy for you Shayna! @QoSBaszler … We are SO proud of you!
? ? pic.twitter.com/exOwQ8ZdXw

The 15th anniversary of 9/11 took place this past week, and the ladies of the squared circle didn’t let it go by forgotten:

My city is the most resilient city, the strongest city, the one who keeps on fighting. We #NeverForget #Remember911 pic.twitter.com/uBl5B9uayU

Billie Kay had some fun at Universal in Orlando, Florida:

Melina walked to end Cancer at the Avon 39 event this week:

13 miles in 3 hrs? Not too shabby! Such an incredible event. So proud of all the participants. #PowerOf39 #EndCancer pic.twitter.com/wXhMh76RbE

The women of WSU stopped to capture the moment:

Crazy amount of fun & talent yesterday at WSU! It's good to be back! pic.twitter.com/TXptd732fp

The RAW Women’s champion Charlotte hung out with the Swiss Superman Cesaro and WWE’s first ever Chinese Superstar Bin Wang:

Bin Wang is the 1st Chinese athlete to train to become a @wwe SuperStar! He made his debut at #WWEShanghai ? pic.twitter.com/SzkQPR6BRt

The women of WWE’s blue brand got prepared for their first SmackDown only event, Backlash:

I've put in all the hours and all the work. I'm ready to leave it all on the mat. Almost there. #WWEBacklash #WomensChampion

2night us women make history 2night I prove why I'm the living WonderWoman 2night I hope 2 b ur Champ N #WWEBacklash pic.twitter.com/HpbTDxJXqY

Tonight I will prove all the haters & the doubters wrong. I'm never gonna walk away. I'm gonna fight until I become champion! #WWEBacklash

And it was Becky Lynch that went home with the crown:

And she received quite a bit of praise for it:

It's a new chapter for the women of #SDLive #WWEBacklash @WWE #WomensWrestling congrats @BeckyLynchWWE pic.twitter.com/vd2fs3eSbX

What a match!! Congrats @BeckyLynchWWE you are in the history books. That title fits perfectly on those boulder shoulders #WWEBacklash

We've more than had our differences and we still do … But congrats @BeckyLynchWWE. I'll be coming for you, baby girl ???

So proud of you champ! I'll admit championship looks damn good on you! Excited for the future!????? N https://t.co/keqJk86eBz

Cannot explain how happy this makes me. @beckylynchwwe has finally done it, she made history. One of the biggest hearts inside and outside of the ring. Congratulations sister ?#4H #WWEBacklash

TEARS…… @BeckyLynchWWE you did it woman…. STRAIGHT FIRE… ? #WWEBacklash pic.twitter.com/BrFjhj44Ij

And, to end the week, the Sexiest of Sexy Maryse shared a throwback of her time as a WWE Diva in 2006: