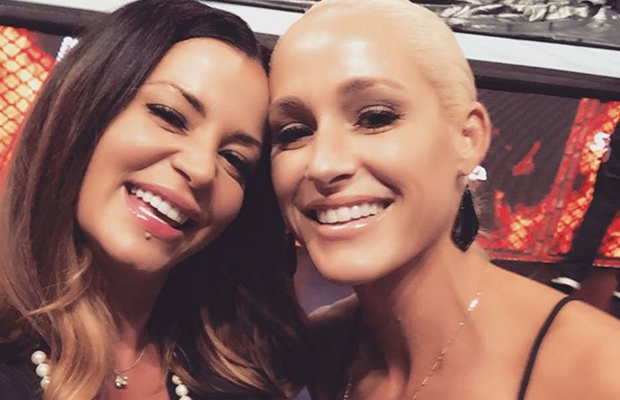 Look who’s got a new haircut! The ever stylish Alicia Fox showed off a brand new mohawk on Twitter. While she definitely pulls off the look, something tells us she won’t be wearing it as-is on Raw:

Rosa Mendes is just six months away from delivering her first child! The gorgeous mother-to-be was surprised by her friends and family with a baby shower this past weekend. Among the attendees were Paige and Lilian Garcia. It looks like the show may have been taped for a future episode of Total Divas. Lilian uploaded a photo to Twitter goofing off with the girls:

Well, this is an interesting turn of events! Seth Rollins and Charlotte appeared at Wizard World together this past weekend and used it as an opportunity to swap titles. While Rollins may have thought this was just for fun, it looks like Charlotte is getting pretty comfy with that WWE Title belt. Rollins better watch his back!

This past weekend marked the 12th Anniversary of Triple H and Stephanie McMahon‘s wedding! No, not the one where Stephanie was passed out at a drive-in chapel in Vegas, their real life one! Congratulations to the first family of pro-wrestling on their happy marriage. Here’s to many more!

12 years with my Best friend and Man of my dreams @TripleH! I can't wait to spend the rest of my life with you! ?? pic.twitter.com/9SJFnIO3KV

2K Games was on hand at this weekend’s Hell in a Cell, event and Superstars and Divas got a chance to play the WWE 2K16 game before it was released to the public. Sasha Banks uploaded a video of some of her gameplay with JoJo. Since she’s not included in the game, she chose to play as Tyler Breeze. Pretty choice!

Natalya shared a picture of her stepping inside an MMA ring this weekend. While the Total Divas star didn’t dish on any details, she did note that something was filmed. Wonder what this new WWE project could be…

Handled some business here today… Coming soon! Excited to share what we filmed here this morning… ????

Maryse continues to film her upcoming zombie movie, and the gorgeous former Diva shared a pic with her cast on set. Among her castmates is Joey Lawrence, so… it looks like Maryse will be doing all of the butt kicking:

That Hell in a Cell match between The Undertaker and Brock Lesnar was hart to watch, and it wasn’t because of the physicality in the ring. It’s because two former Women’s Champions were seated at ringside and I kept trying to find them! Candice Michelle joined The Undertaker’s wife Michelle McCool at ringside for the big special on Sunday night. Both of them are looking stunning!

So much fun with this gem @candice_ehrlich ???

Amanda, the newest addition to the cast of Total Divas, was spotted in a clip lounging and snapping pics with who looks to be her new bestie, Eva Marie. It looks like a lot of the next season of Total Divas may focus on this budding friendship. Could Red & Gold be a future tag team?

Hell in a Cell taking place in Los Angeles brought out loads of huge stars, including three of the Four Horsewomen of MMA. Among them was Shayna Baszler, who just started her professional wrestling career. The trio snapped a pic along with Natalya and Becky Lynch backstage:

Speaking of Becky Lynch, herself and the WWE Divas Champion were chosen to promote Monday’s episode of Raw in the San Diego area. Charlotte and Becky appeared at iHeartRadio and even sat down on on Good Morning San Diego to do their best Ron Burgundy impressions. This marks the first time the Diva duo was chosen to do PR on this level for the company:

While doing press for her next big fight, Ronda Rousey expressed her interest in stepping into a WWE ring, even saying that she wanted to become the Divas Champion in the future! Triple H definitely took notice and welcomed Rousey to step into a WWE ring:

WWE Hall of Famer Trish Stratus attended the Canadian premiere of her new movie Gridlocked this week. The former Women’s Champion posted a photo from the event where her and her co-stars answered questions from the audience:

The NXT crew was on the road in California this past weekend at the Aftershock festival. Bayley, a Cali native, made her first appearance home with the NXT Women’s Title. She shared a pic that truly captured her pride to be back with the belt:

California! I'm home. And I brought something back with me ? #AfterShockFestival #WeAreNXT

Nikki Bella may always have all eyes on her, but this past weekend she let one of her close friends have the attention as the bride, serving as a bridesmaid in her wedding. Here’s a pic of her and boyfriend John Cena at the event: