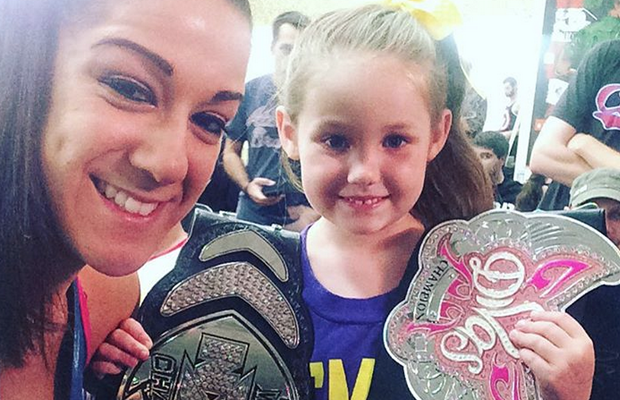 .@WWE brings in the best talent from around the world to compete…It is my pleasure to welcome Kana to @WWENXT. pic.twitter.com/WxotKEmP9Q

Connor’s Cure is really drawing some attention. WWE has began a dance challenge to raise awareness with WWE Divas and Superstars challenging each other to dance-offs. Natalya, Sasha Banks, Brie and Nikki Bella all took part in this amazing cause:

The “McMahon-Helmsley” children made a rare social media appearance this week. Stephanie McMahon shared an adorable photo of her three girls on Twitter enjoying some ice cream this past Labor Day weekend:

Nothing says #Summer like Ice Cream in your PJ's! Hope everyone is enjoying their #LaborDayWeekend! pic.twitter.com/62AoET3R2Y

Here comes the bride! Kelly Kelly is on her way to the altar in a few months, but had to celebrate one of her last weekends as a single girl with her ladies. Among them was former foe and bridal party member Maryse! The former Divas Champion shared this gorgeous photo of the group from a night out in Cancun:

A photo posted by TheRealMaryseOuellet (@therealmaryseouellet) on Sep 6, 2015 at 9:54pm PDT

Fans were beyond disappointed to learn that Lana had suffered an injury training last week. Our hearts broke even more when the Ravishing Russian tweeted out a photo of herself wearing a cast. All of us at Diva Dirt are wishing her a speedy recovery and can’t wait to see her step into the ring:

I will leave one of the greatest legacies in @WWE & I know it will require courage, sacrifice & overcoming adversity pic.twitter.com/qVh8vzI8DN

Charlotte had a little fun with WWE’s hair stylist backstage at SmackDown this week. Before the number one contender for the Divas Championship comes out with flair…she does it with hair:

We call this "finger in the light socket"!!! ??? @mrs_lindysue Typical Monday afternoon. How do you spend your Monday?! #WWEBaltimore #BigHairDontCare DOING IT with Hair ??

The clock continues to tick as the minutes count down to crown Nikki Bella the longest-reigning Divas Champion of all time. Team Bella is literally sitting pretty waiting for that moment with this Instagram photo that Alicia Fox posted while backstage at Raw. They likely didn’t stay comfy for long, given Charlotte’s challenge to Nikki later that night:

….the clock is ticking… #TeamBELLA #Raw

Sara Lee began her journey towards becoming a full-fledged WWE Diva this week. The Tough Enough winner reported to Orlando to begin her official training at the WWE Performance Center, tweeting a photo to commemorate her first day:

First day at the @WWEPerformCtr ? amazing group of people that I'm really excited to work with ???

Congratulations are in order for Lucha Underground star Angela Fong, AKA Black Lotus! The former Diva married the man of her dreams in Vancouver this week. Her and her new hubby make a stunning couple:

Sharing the dream with Jordyn at #nxtjacksonville tonight!

Team B.A.D. member Naomi is known for her amazing (no pun) shoes she rocks during her matches. New Day has definitely taken notice and challenged Team B.A.D. to a “shoe off” with Kofi Kingston‘s kicks stepping up to the plate. Big E shared the hilarious video on Twitter:

NO ONE WILL TAKE TNA AWAY FROM HER…but first, a stop at the Eiffel Tower. Dixie Carter shared a photo of herself in front of the famous structure this week. It looks like the trip to Paris was all business, though, as the owner of TNA revealed she was on her way to some meetings. Hmm…

Having great meetings in Paris today!!!! Headed to do interviews now.

Queen Elizabeth officially became the longest reigning monarch this week, and Vince McMahon documented the historical moment on Twitter, making a mention of Divas Champion Nikki Bella’s own lengthy reign. Hopefully her reign won’t be quite that long:

Queen Elizabeth sets the record for longest-reigning UK monarch. The Bellatron continues to count down.