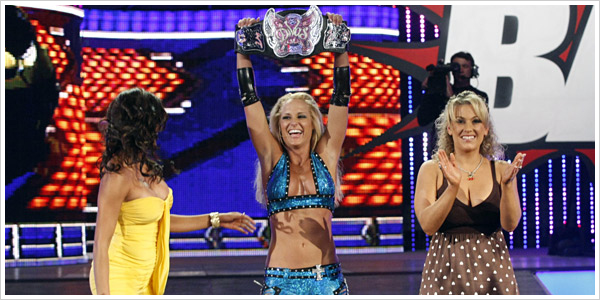 I guess, given all the hype it was bound to happen – last night’s match for the Divas Championship was something of a letdown. You know when you’re really, really looking forward to something and then afterwards you feel like, “That was it?” That’s how I felt last night. God I hope this doesn’t spell the same for The Dark Knight… but that’s a story for another day! Meet Michelle McCool, your first ever Divas Champion. Reading your comments last night, some of you are pleased and some of you aren’t but for me, I was happy whatever the outcome because I thought and hoped we’d be treated to a great wrestling match. Unfortunately, what started out strong and was a solid match for the first three-quarters, was let down by WWE’s time constraints. God forbid, we give the Divas a little more time and cut away from Triple H’s entrance.

This was my only qualm with this match, so if you’re hoping for ranting and raving that “Zomg, Michelle’s a whore and shouldn’t be champion”, you will be bitterly disappointed. Michelle and Natalya both made a fantastic effort and it didn’t take me long at all to get into this match but what it needed was time and that’s something that WWE just wouldn’t give the Divas last night, just a few more minutes would have made all the difference – instead the finish came off somewhat anti-climactic. Michelle manages to get out of Natalya’s Sharpshooter but Natalya can’t get out of the heel hook? I was hoping that it would take a couple more tries for Michelle to finally be able to make Natalya tap out, instead she tapped on the first instance. I felt this hurts the third generation Diva because she has been built up so strongly, WWE really should have set this up so that both Divas took each other to the limit until one of them couldn’t hang on any longer; for most of the match Natalya did just that, controlling the match and really taking it to Michelle. I would have then liked to see Michelle take control of the match and do the same to Natalya, but just as Michelle was catching steam – you blink and before you know it, both girls are lying on the canvas and Michelle’s got the heel hook in. You blink again, and the match is over!

There was so much more potential for this match, had they gotten some more time but that seems to be the main plight for the SmackDown women’s division. After all, it was time that kept them off the Night of Champions card. Would I say the match was decent? It was. Would I say it was all that I expected and more? No. It was passable, but hopefully these two will get more chances down the line because I don’t think this program is over just yet! Match Rating: 6/10