Systematic Breakdown of One Night Stand 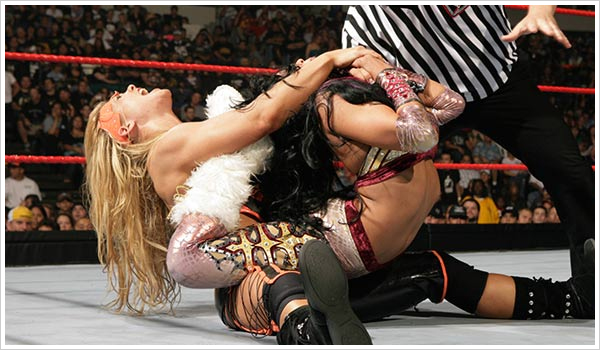 It’s only been two weeks since I wrote my last “Systematic Breakdown of…”, but here we are again. Another pay per view in the history books – and actually, the word “history” is very fitting here – because last night at the 2008 edition of One Night Stand, history was made for the WWE Divas when Beth Phoenix and Melina did battle in what I am sure in future, will be an iconic “I Quit” match.

This month we are introducing new elements to the Breakdown, after the cut we have pictures too!

Thoughts & Reactions
For those of us who watched the match live last night, I know I certainly felt like I was watching history being made because from from start to finish, this was a fantastic, competetive match. Both Divas deserve a standing applause, because they worked their butts off at One Night Stand and delivered a match that for me, stole the show. I wrote in our Prediction Post yesterday that this could go one of two ways; it could be a filler match or it could be a defining match for the women’s division and thankfully it was the latter. WWE really invested time into this match allowing it to be the best it could be and I’m grateful, I loved watching this match, it showcased the ability of the Divas. Sure, they’re sexy but it’s not all about sex… these two Divas proved that they can wrestle, that if given the time and emotional investment into storylines, that the WWE Divas brand can be so much more than Diva Search girls, bikini contests etc.

I fully expected the Beth win and I think it was the right call to make, as much as I love Melina, there’s no way you could have the Glamazon quit without making her look weak. Yes, Melina quit but she still came across strong – just look at what it took for Beth to finally put Melina away. She really hung on in there and that’s something I hope WWE pushes on RAW tonight. Furthermore, they should really push that Melina took Beth further than any Diva before her could, really made Beth work for her victory and didn’t make it easy for her. Candice and Mickie, sure they had good matches with Beth, but those matches in my eyes are weak compared to this one. They really need to sell that this match with Melina really took it’s toll on the Glamazon because Melina certainly deserves the kudos and after her amazing work over the past few weeks, really does deserve to remain in the limelight.

Overall, the in-ring work and the story told in this match was fantastic and the girls deserve a lot of respect for the way they mapped out this match and were able to tell a story. They got a lot more time than the Divas usually do, 10-12 minutes and planned every bit of it so it was must-watch television. Even though we all knew Beth would win in the end, they really worked hard to give Melina an upper-hand in parts of the match, have her come across as though she just might beat Beth and that added to the excitement of the match-up.

The finish was just fantastic and a sight to be seen, the image above is just wow… I mean, if you thought Beth piling up Melina and Mickie at Judgment Day was a sight, then this was it’s equal. What a fantastic finish to the match, it really showed that Beth needed to pull out all the stops to get Melina to say “I quit”, and this move with Melina’s body so contorted her head touching her feet – it was just sick! This finish showed the physicality and the intensity of both these Divas, I don’t think there could be any other move to end this match that would do it justice; they really went that extra mile with the finish with Melina being forced to quit due to the severity of this move.

After a 5-star match, what does WWE do? Taint it! Ain’t that always the way… Instead of appreciating this defining Divas match, we cut to John Cena talking about two girls doing submission holds is hot. Let’s throw out the window the fact that this match was so physical, so intense just like the men’s matches. No instead, let’s make sexual innuendos. The whole Cena-Adamle-Mickie thing was stupid and pathetic. I don’t think WWE even knows where they’re going with Cena-Mickie, they just want to get her on TV in some fashion. She still can’t act, though.

Melina: What can I say, I didn’t expect Melina to get as much offense as she did. She really wore down the Glamazon and I hope for her sake, that WWE follows through and sells how much damage that Melina did to Beth – damage that no other Diva has been able to do.

Mickie James: What was the point? Honestly?

Fashion Focus
The Good: I don’t think either Beth or Melina was dressed in their best last night.

The In-Between: Neither Beth or Melina looked fantastic, but decent.

Photos
Below, are digitals of the “I Quit” match. Copyright to World Wrestling Entertainment, Inc.