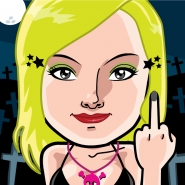 Favorite movie: It’s a toss-up between Silver Linings Playbook and Blue Valentine. One gives you hope and leaves you with a feeling that the person you least expect could end up being your soulmate. The other one shows the harsh reality of the world we live in when it comes to love and relationships, and just how truly screwed up the majority of them are.

Favorite women’s wrestler: At the moment, Brie Bella. She has come so far at this point in her career and I can’t help but admire the fact she went out, made herself better inside that ring, and was one half of the best women’s feuds in recent memory.

Favorite men’s wrestler: I don’t know, really. It’s been so long since I actually took the time to watch the product on a consistent basis. I guess, at the moment, I’m on the Sami Zayn bandwagon. I’m also excited for Kenta and Prince Devitt, and for what they could potentially do in the WWE.

Favorite match: As much as I loved Stephanie McMahon vs. Brie from SummerSlam with the Nikki Bella turn, I have to go back to Kelly Kelly & Edge versus Layla, Michelle McCool and Dolph Ziggler with the World Heavyweight Championship on the line. That was back when I loved wrestling and that match was everything to me.

Favorite feud: Brie Bella versus Stephanie McMahon. Need I say more? Stephanie was in her element, and on top of the world. Brie Bella came into her own and proved that she is a top diva. And the best part of the entire thing is that the payoff in the end helped elevate Nikki and she’s never looked better.

Least favorite wrestling moment: There’s so many that it seems almost unfair to single out one. Wrestling is always full of hits and misses, and every single moment means something different to almost everyone. How you take each turn, twist, and angle is entirely up to you and since it’s your opinion, that doesn’t make you wrong. All the moments I find crappy, rotten, and unbearable are just my opinion on whatever has happened. You have to take the good with the bad.