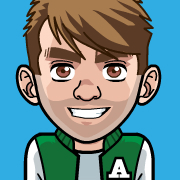 My interests outside of wrestling: Eating out (cliche!), paintballing, socialising, partying…. I need more hobbies, preferably non-alcoholic. My days as a student have killed me!

My most played song on iTunes: “Walking on a Dream” by Empire of the Sun. My all-time favorite song; can’t wait for the 2nd album.

The movie I could watch on an endless loop The whole of Christopher Nolan’s Batman trilogy – the best cast in any set of films ever. Can’t get enough of these!

My favorite fictional character: Auron from Final Fantasy X. Not even into video games anymore but that game is my ultimate fave and Auron was a major legend!

My three most visited websites: Digital Spy, Google and Facebook.

My female wrestling ‘spirit animal’ would be… I would definitely say it’s Paige. She loves a good leather jacket, she doesn’t care about her actions and she’s pleasing on the eye. Plenty of common attributes between us!

If I had a free shot at any character in wrestling, I would hit… TNA’s Ken Anderson… Anderson. Horrendously dull.

If I was a wrestler, my go-to gimmick and entrance music would be… I would be a heel manager, and as I have a lot of time on my hands, I had already thought of this! I would wear a different block coloured blazer every week and I’d try to play as much as possible for as little work as possible, typical heel tactics! My theme would be Paige’s theme, as of course, I’d be managing her!

The finishing move I wouldn’t want to be on the receiving end of is… Paige’s Rampaige. My god, it looks sick!

If I had front row seats to WrestleMania & faced the hard camera, my sign would say… #VintageHeel