The Five to Watch 2013: Candice LeRae 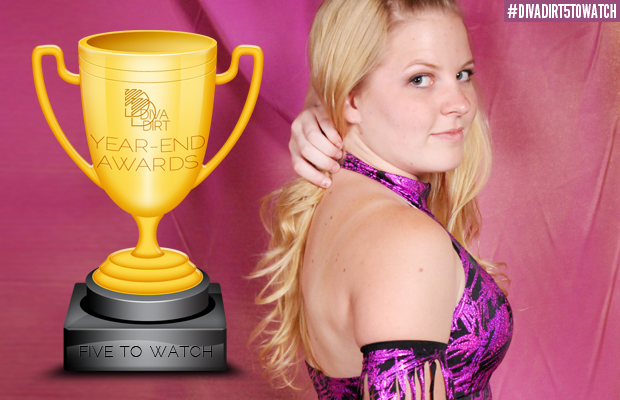 Welcome to Diva Dirt’s Five to Watch 2013! This annual list compiles five rising talents in the world of women’s wrestling that we think have what it takes to be the next big thing.

From their in-ring abilities to their unique personalities, we aim to spotlight some of the upcoming female talent that you may not yet know about. Over the next five days, we will unveil the names that the Diva Dirt staff have handpicked.

ONE TO WATCH: CANDICE LERAE

Who is she?: Originally hailing from Winnipeg, Manitoba, this nerdy blonde Canadian has called California home for many years. You may recognize Candice LeRae from a recent appearance on Impact Wrestling, where she answered Knockouts Champion Gail Kim’s open challenge, just coming up short but turning a lot of heads her way in the process.

Her story so far: Trained by the likes of Bill Anderson, Jesse Hernandez and Puma, Candice made her professional wrestling debut in 2002. The “Canadian Goddess” wrestled around California for the likes of Empire Wrestling Federation and All Pro Wrestling, but it was when she began appearing for Pro Wrestling Guerrilla that she really started to come into her own and established herself. One of her most prominent storylines in the company took place in 2007 and involved being beaten and bullied by the wrestler she managed, Human Tornado, until she finally stood up for herself. She would also form a partnership with Chris Hero during this time. LeRae was a constant in PWG for many years – accepting challenges from many men and women alike – and would show off an intensity and tenacity that was unparalleled by women in California at the time.

Over the years, Candice also formed a love-hate relationship with Joey Ryan, who had a tendency to “Boobplex” her at any chance he got, until she found a vicious counter: the “Ballsplex”. Their relationship currently rests on the “love” side of things, as the two have now formed a very successful tag team. The pair has also started their own YouTube show, cleverly titled The Candice & Joey Show, which follows their adventures wrestling around the country.

In 2013, Candice has made her debut for many a notable promotion – Beyond Wrestling, SMASH, Combat Zone Wrestling, Ohio Valley Wrestling and Family Wrestling Entertainment – and her work has garnered her much positive attention from the wrestling community, resulting in a TNA tryout, and later appearance on television.

Why we chose her: Candice LeRae has always been a fixture on the independent circuit, but it was 2013 where she really shone. The feisty young wrestler is constantly striving to improve and work on both her skills and her look and it is truly paying off for her. Her breathtaking agility and daring is entertaining people by the day, capturing the attention of many new independent promotions and landing her on the radar of the number two wrestling company in America. Candice is sure to go places in 2014 – we don’t doubt that she’ll be mixing it up in one of the top all-female promotions in the very near future.