The Tiffany Guide to Impact: Not So Friendly Competition 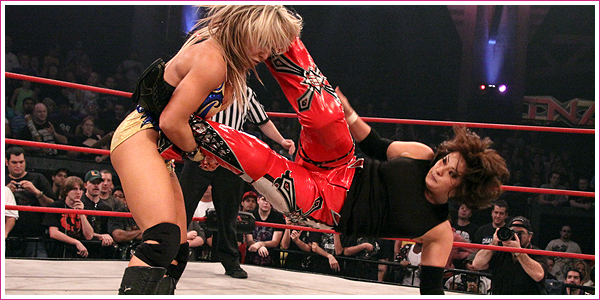 This week on Impact, we’re treated to double the dose in Knockout action.  As per usual, we try not to overdose on TNA’s overwhelming generosity.

In the first contest, Hamada takes on one half of the TNA Knockout Tag Team Champions, Taylor Wilde.  Taylor enters the Impact Zone by her lonesome and does the tango with herself.  (Not to be confused with the type of solo-activity recently made famous by Carrie Prejean).

Taylor and Hamada partake in a show of respect with a quick handshake.  The two Knockouts link hands, but Taylor spins Hamada into an arm drag.  Taylor leaps over Hamada, who then rolls over Taylor.  Taylor runs the ropes and follows through with a headscissors takedown.  Unfazed, Hamada plants Taylor Wilde with an Impact DDT.  Hamada goes for the cover, but Taylor kicks out at 2.

Hamada lifts Taylor for a back suplex, but Taylor counters by landing on her feet.  She takes Hamada by the hand and leads her into a springboard arm drag and a swift kick to the head.  Taylor covers Hamada, but Hamada gets the shoulder up.  Ducking a clothesline, Hamada dazzles Taylor with a super kick.  Hamada climbs up to the top rope (while Taylor nudges into position a tad too obviously) and delivers a moonsault.  Taylor kicks out once again.

Hamada sets Taylor up for a powerbomb, but Taylor refuses.  Hamada pulls Taylor into a powerbomb again, but this time Taylor rolls into a sunset flip pin.  Hamada kicks out.  This is the consecutive tone for the crucifix pin and the hurricanrana Taylor also pursues.   Always quick to recover, Hamada rocks Taylor’s marbles with a leg-feed enzuigiri.

Signaling her finisher, Hamada sets Taylor up for the Hamada Driver.  Instead, Taylor lands on her feet, grabs her from behind, and attempts to lift her into a German suplex.  However, Hamada sandbags, breaks the hold, and nails a spinning kick to the side of Taylor’s head.  She delivers the Hamada Driver, successfully this time, which renders a 3-count and the win.

This was an entertaining and high-impact match, which is a staple for a combination such as Hamada and Taylor Wilde.  I’m not sure what this spells for either Knockout at the moment, other than to put on a fleeting clinic for appreciative fans.  Every so often, there are Knockouts that push the envelope in singles competition.  They also just happen to remind those of us who might’ve forgotten just what makes this a highly credible division.  Nowadays, it’s a treat to find either Taylor Wilde and Sarita in action without the package deal of Saritaylor.  Now that the Knockouts Championship has been pushed from the forefront for the time being, perhaps this will allow both ladies more time in the limelight as single competitors.

Speaking of the luchadoress, Sarita meets Alissa Flash in their only second bout.

In hindsight from last week, the TNA commentators proceed to milk Traci Brooks‘ quote-on-quote “birth defect,” and Alissa’s supposed disrespect/disregard for her plight.  Last time I checked, pinpointing an opponent’s weakness in a competition was not a reprehensible offense, but to each her own, I suppose.

Despite having one of best (if not the best) figures amongst the Knockouts, Alissa opts to cover up yet again this week.  Shades of previous weeks, the jacket serves as her in-ring gimmick.  As badass as the jacket and the tease may be, that get-up can’t possibly be comfortable to wrestle in. (By the way, does Alissa Flash’s theme “Take It Out On You” sound suspiciously a lot like “I Get Off On You” by Halestorm to anyone else?)

Back to the contest, Sarita and Alissa Flash start the match with a lock-up.  Alissa Flash disentangles herself from the hold, ducks a clothesline from Sarita, and takes her down.  What follows seems to be a brief a stint of miscommunication when Alissa rolls out of a schoolboy pin and Sarita goes for a crossbody in a rather awkward transition.  Though, all is forgotten when Sarita covers Alissa for a 2-count.  Alissa kicks out, of course, and dispirits Sarita’s second attempt at a crossbody with a nasty looking shot to the midsection.

Alissa capitalizes on the damage by mounting and choking Sarita.  She drops her with a scoop slam and nails an elbow drop for the cover.  However, Sarita gets the shoulder up.  Alissa holds nothing back in laying several shots to the side of Sarita’s head and a foot choke in the corner.  Alissa continues the assault before Sarita finally flips matters into her favor with a snap belly-to-belly suplex.  This leads to an exchange of kicks between the two.  That is, until Sarita lands a springboard dropkick off the ropes.  Alissa goes down but manages to get the shoulder up just at the nick of time.

Alissa recovers enough to reverse Sarita’s offense into a back suplex and an unsuccessful pin attempt.  While engaging in an argument with the referee, Alissa continues to mess with her zipper (which I suppose is the Future Legend equivalent to the Cody Deaner cap turn).   Nonetheless, Sarita counters into a victory roll which results in a shocking nearfall.  Alissa tries for a kick, but Sarita responds with a spinning heel kick of her own.  This sends Alissa into a daze long enough for the 3-count.

As Alissa makes her way to the back, Traci Brooks blindsights her to avenge their beef from last week.

This match was considerably less fast-paced than the Taylor/Hamada match, but it had more storytelling potential.  The ending was somewhat anti-climatic; the roll-up would have been a more effective finish.  Nevertheless, Alissa has made strides since her last encounter with Sarita.  So, it was nice to see her get in a bit more offense this time around.  Although this match was used as a vehicle to forgo the rivalry between Alissa Flash and Traci Brooks, it also served to give Sarita more momentum.  There is something to be said about the fact that Sarita could succeed where Taylor couldn’t.  If this is an angle TNA chooses to pursue, I suppose a little friendly competition never hurt anyone.

Oh, and if you haven’t heard: Raven’s back.  Which only infers further physical mutilation of the artist known as Daffney.  Sweet.