The Tiffany Guide to Impact: There’s No ‘I’ in Team 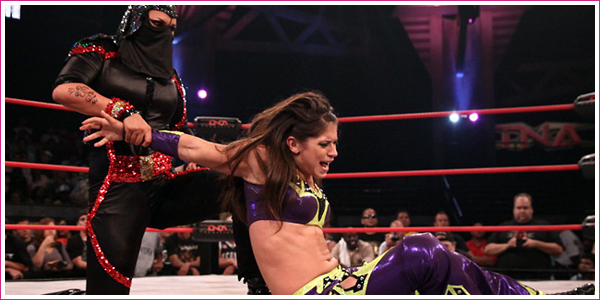 This week on TNA Impact presents Round Numero: God-Knows-What of the Knockouts tag team tournament.  With a little something extra, of course.

First match of the night pits Velvet Sky and Angelina Love vs. Tara and Christy Hemme.

As the competitors make their way to the six-sided ring, I can’t help but notice just how awkward Christy Hemme looks while spazzing out next to Tara.  Moreover, this must be the first (and inherently last) time I’ve ever seen Angelina Love and Velvet Sky actually match.  Are we in Bizarro World?

Tara and Angelina start off the match.  Velvet distracts Tara long enough for Angelina to capitalize.  Tara suffers a stinging chop as a result.  Angelina makes another attempt, but Tara counters and maneuvers Angelina into the Hair-pull Gory special.  Tara flips Angelina face first onto the mat.  Christy gets tagged in and is used for the essentially lifeless weight that she is.  Angelina Love takes her down with a drop toe hold and Velvet Sky makes the tag.  Play-fighting extraordinaire, Velvet, takes the moment to make a mockery of her opponents and even takes the initiative for the first pinfall of the match.  Whaddyaknow?  Christy kicks out and Velvet tags out to Angelina Love.

Christy is taken down with a snapmare and a bit of tandem action.  Angelina goes for a cover, but there’s a kick-out at 2.  When Christy regains her strength, both women are taken down with similar offense.  Both ladies make a hot tag to her respective partners.  Tara takes Velvet out with a snap suplex and with a standing moonsault for a near fall.  Christy gets tagged in and serves a steaming mouthful of firecrotch to poor Velvet, but Angelina breaks up the pin at the 2-count.  Tara takes the fight to Angelina to the outside.

Meanwhile, Madison Rayne makes a surprising appearance.  There is an exchange among them that leads to Madison spraying hairspray in Christy’s eyes.  Shocker.  Velvet rolls Christy for the win.

After the match, Madison pleads her case to her former Mi Pi Sexy leaders with some half-assed apology.  I don’t think I’ve ever felt so apathetic toward an emoticon.  In any case, Angelina and Madison seemingly “forgive” and invite their lost lamb back into the stable.

Well well well, looks like this turn of events couldn’t have come at a more opportune time.  Seeing as this was Angelina Love last TNA appearance (for the time being), Madison and Velvet will continue to live out the Beautiful People name in the tournament.  No, I’m not ready to say goodbye to Angelina just yet!  Not for nothing, but way to book Madison like such a pussycat.  At least Madison seems to be right at home in the tag team circuit.  Velvet?  …eh, not so much.

Next up is Chapter #3300 of the Deaner Chronicles: Cody Deaner is set to compete against Alissa Flash in a Lumberjill match.  Knockouts of all backgrounds, shapes, and sizes file the outside of the ring while Cody parades around as the self-proclaimed “King of the Knockouts.”  How apt.  Can I be Queen of the Deaner? Meanwhile, The Motor City Machine Guns ham it up on the mic, even referring to The Future Legend as a “big girl.”  Hmmm…wonder where they got that from?  Looks like Tazz’s influence is making an impact in more ways than one.

Cody Deaner is momentarily distracted by Tara, giving Alissa the opportunity dump him to the outside.  Cody Deaner gets ambushed and attacked by virtually every member of the women’s locker room, and let’s face it… the dude probably enjoys it, eh?  Once the banshees simmer down, Cody is rolled back into the ring where Alissa takes him down for the 3-count.  Thus, marks the first official win in Alissa Flash’s career.  Hooray!  TNA sure brings the major lulz.

Call me old-fashioned, but I just cannot stand the sight of heels and faces working together.  It just takes away from the dynamic of “good” guys verses “bad.”

To the approval of the rest of the Knockouts, ODB blindsights and taunts Cody Deaner, in preparation for their Championship match on Sunday.  In somewhat of a pay-off for this ridiculous waste of a segment, Awesome Kong seems unforgiving of her apparent issue with Tara.  The fight spills out to the back.  Yeah, okay.  I’ve already thrown the towel in for this Kong/Tara feud quite awhile ago.  There seems to be a pattern of building up this “rivalry” to a pay-per-view event that it has no chance of being booked onto.  We’ll see.

Next is the final match-up of the Knockouts tag team tournament before No Surrender.  Tonight, Awesome Kong and Raisha Saeed take on Sarita and Taylor Wilde in vie for the final spot.  I’m pretty sure I’ve already mentioned just how much I loathe that Taylorita entrance.  It’s reminiscent of a secret handshake one might dream up with his/her Elementary schoolmates.  Obviously, this visual is heavily assisted by the “underwear over the pants” illusion sent on by Sarita’s tights.

Taylor Wilde and Awesome Kong begin the match.  Taylor attacks Kong with a series of kicks, but Kong takes her down.  The MCMG express their concern, but Taylor regains herself and takes the fight again to Kong.  However, she is once again overcome.  With a sickening slam to Taylor onto the mat, Kong tags in Raisha Saeed and assists her in a tandem effort.  Taylor gets the shoulder up at 2.  Taylor rolls out of the way and makes the tag to Sarita.

Sarita rolls Saeed into an armdrag.  Saeed ducks a clothesline and Sarita goes for what seems to be a potential headscissors tilt-a-whirl armbar.  Her offense is halted by a sidewalk slam.  Saeed goes for the cover, but Sarita kicks out.  Saeed delivers a few chops and then tags in Kong.  Both Kong and Saeed put the boots to Sarita’s throat, briefly.  Kong then delivers a final stinger to Sarita.  Sarita is whipped into the corner and Kong charges into her.  Kong then grounds Sarita with a snapmare and a headlock.  The crowd gets behind Sarita, but that bit of encouragement is soon squashed as Kong effortlessly disposes of her like a rag doll.  Kong quickly tags in Raisha Saeed.

Saeed mimics Kong’s previous offense with a snapmare and submission of her own.  Sarita is taken down for another pin attempt, but she kicks out again.  Sarita reveals signs of effects from a snap suplex and a scoop slam but manages to power out long enough to tag in Taylor Wilde.

Taylor proceeds to deliver a beautiful set of moves – a clothesline, an impactful front dropkick, and a picture perfect headscissors.  Taylor rolls through with a hurricanrana pin, but Kong breaks up the count.  Sarita delivers a running dropkick to Kong to avenge the interference.  Sarita tries to follow up her attack, but Kong sends her over the top and onto the floor.

In the meantime, Taylor and Saeed continue the match.  Saeed with a leg sweep and Taylor with an uninspired kip-up, Taylor Wilde picks up the win for her team with a German suplex for the 3-count.

While Kong expresses her displeasure, Lauren appears for an impromptu interview.  Taylor promises that she and her partner will be making history at No Surrender.  Sarita says some stuff in Spanish, and if my 3 years of expertise en Español are of any indication… I think she’s pulling for Cody Deaner this Sunday.