The Tiffany Guide to Impact: To the Victors Go the Spoils 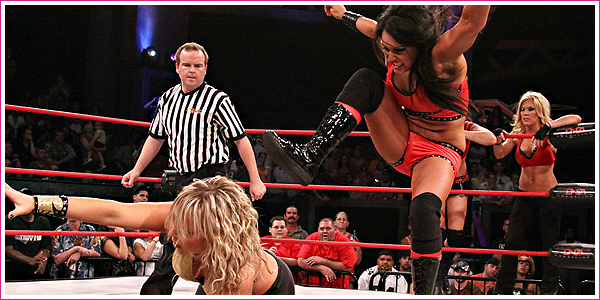 This week on Impact marked a Knockout Elimination tag team match and a Knockouts Title match.

Hamada and Traci briefly lock up, but Hamada takes Traci down.  Hamada attempts a springboard moonsault, but Traci dodges in the nick of time.  When Traci goes for the Sunset Flip, Hamada rolls out, allowing Traci the opportunity to avoid a kick and attempt a school boy roll-up.  Hamada kicks out, ducks a clothesline, and finally connects with a kick.  Hamada goes for the cover, but Traci gets the shoulder up.

Christy Hemme gets tagged in.  She isn’t able to put up much of a fight before being eliminated ala a jawbreaker courtesy of Traci.  Taylor then enters the match on her team’s behalf and covers Traci following a dropkick.  Alissa Flash distracts Taylor for a moment, and Traci capitalizes with a clothesline before tagging in Alissa.  Alissa bestows the Curb Stomp upon Taylor, who gets the shoulder up at 2.  Taylor retaliates with a double knee backbreaker and a tag out to Hamada.  Hamada drops Alissa with a resounding front dropkick from the top turnbuckle.  With a bit of residual aggression from their bubbling feud, the fight between the two adversaries spill out to the back.

Meanwhile, Sarita takes Velvet to the limit with a series of armdrags.  Velvet kicks out.  Sarita tags in Taylor, and in a double team display, Velvet is taken down by a drop toehold and a dropkick.  Velvet kicks out yet again.  In yet another pinning predicament, Velvet kicks out of a double wrist clutch Northern Lights Suplex.  In somewhat of a surprise element at play here, Velvet Sky is able to ensure a victory over Taylor Wilde with a DDT.  It comes down to 3 on 1.

Sarita enters the match, attempting a dropkick but she misses.  Velvet tags in Traci, who is quickly eliminated by a belly-to-belly suplex.  The Beautiful People bum-rush Sarita and are able to get the upper hand for the majority of the remainder of the match.  That is, until Sarita is able to outsmart the duo and eliminate Velvet with the Small Package.  Madison Rayne goes for a suplex, but Sarita counters with yet another inside cradle.  Madison kicks out, and she kicks out again from a schoolboy attempt.

Alissa Flash seems to be making her way down the ramp onscreen, at the perturbation of the referee.  Back in the ring, Sarita takes Madison out with a powerbomb, however the referee is distracted long enough for Lacey Von Erich to approach the ring and plant Sarita with a lifting body slam.  Madison gets the win for her team.

With a few high spots, this was an overall decent match.  A few of the eliminations were just a tad weak, but it served its purpose – which was to sustain the feuds.  Velvet was made to look somewhat strong in this match, being able to kick out of a few predicaments and to score a pinfall the way she did.  That will be a rub going into the Tag Team title match. Lacey Von Erich also fulfilled her role rather fittingly.  That lifting body slam was eloquently executed, and to her credit Lacey is already differentiating herself by adopting a less Diva-oriented moveset.  Which, ideally, complements the whole “third generation” persona.  In the words of Roddy Piper “old school is cool!”  For what it’s worth, the Beautiful People now seem to work for the best interest of the team.  Looking back, that isn’t something we’ve seen often from them.  Definitely, a new side of Mi Pi Sexy in more ways than one.

Next, is the TNA Knockouts Championship competition between Tara and ODB.

ODB and Tara come to blows at the start of the match.  Tara is whipped into the corner, is caught mid-transition, but dodges the Running Powerslam.  After an exchange of pinning attempts, neither one is able to pick up a pinfall.  ODB goes back on the offense with a shot to the midsection.  ODB lifts Tara up for a vertical suplex, but Tara grounds herself.  She then lifts ODB in the same position, matching her strength, but ODB sandbags as well.  Tara lands a series of shots, runs the ropes, and attempts a crossbody, but ODB catches her in mid-air.  ODB seems to have trouble lifting Tara over, but she eventually succeeds with the Fallaway Slam and a kip-up for good measure.  ODB goes for the cover, but Tara gets the shoulder up before the count of 3.

At that moment, Awesome Kong makes her way into the Impact Zone with a sledgehammer in tow.  Tara looks on, but the distraction costs her.  Kong goes after So Cal Val just as Tara is able to turn her luck around with what seems like an armbar/gogoplata hybrid (don’t quote me on that).  Kong “coerces” Val to place Poison the Tarantula in the line of fire, but Tara stops Kong in her tracks.  This abstraction allows ODB to blindsight Tara with the TKO for the 3-count.

This was a weak match (especially for a title match), but that is the payoff for an overall weak feud.  I still struggle to realize just where ODB fits into the mix.  It’s safe to anticipate a triple-threat-match sometime in the future, most likely with the title on the line (preferably at the next PPV).  Hopefully, that will put an end to this already unsatisfactory ménage à trois.