The Twins Have Split! 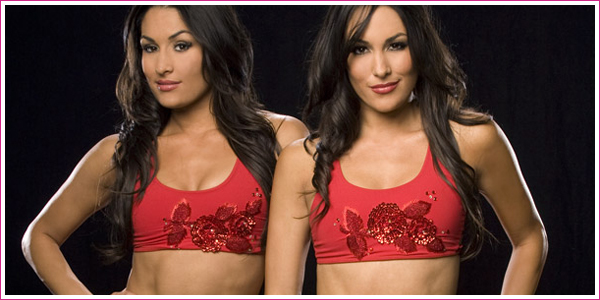 If you missed ECW tonight, you sure missed out on a lot of Diva developments! Aside from the breaking announcement that next week’s ECW will be an all-diva special to promote the Battle Royal at WrestleMania, the show finished off with an edition of Miz & Morrison’s Dirt Sheet which saw the apparent splitting up of Nikki and Brie Bella! Since the Bella Twins were now joining Miz & Morrison following last week’s SmackDown, they too were in the ring for the Dirt Sheet, where their former flings, Carlito & Primo, were mocked.

Having had enough, Carlito & Primo came out to stop the mockery and proceeded to challenge Miz & Morrison to a match at WrestleMania 25 where both sets of Tag Titles would be on the line and the winning team would hold the unified Tag Team Championship. Carlito & Primo then went to spit apples in the face of Miz & Morrison, but they ducked and the spit ended up hitting Brie Bella! Nikki Bella, however, laughed hysterically at what happened to her sister, and the irate Brie turned around and speared Nikki, causing a catfight to ensue! The Colons and Miz & Morrison were able to seperate the two, but a reconciliation did not happen; Nikki Bella left the ring with Miz & Morrison while Brie Bella stayed with Carlito & Primo!

It seems the “dynamic-duo” twin gimmick has run its course and creative has finally decided to split the two up and turn Nikki heel while keeping Brie a face. I’m sure loving this new jolt of life put into their characters as it was much needed and I can’t wait to see how it unfolds! A 3-on-3 tag match next week perhaps? At least they can finally stop dressing identically and, who knows, if Nikki stays with Miz & Morrison, she just may be ECW’s newest Diva!

Looks like there won’t be any alliances between these two at the Divas Battle Royal and I’m predicting Brie will get her revenge by eliminating Nikki from the match!