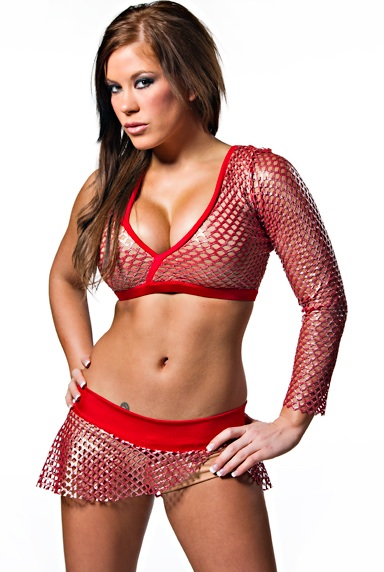 After an incredibly impressive 2010 in which Madison Rayne reigned supreme over the Knockouts division, things barely slowed down for the Killer Queen in 2011. In an era of Knockouts where former champions are seemingly cast aside after losing the belt, Madison Rayne continued to her hot streak, staying in the forefront for much of the year and made history by having the single longest Knockouts Championship reign in history.

Continuing her “Rayne of terror” from 2010, Madison continued to hold the Knockouts Title through April though many expected her to lose against Mickie James at January’s Genesis pay per view. Rayne would pick up consecutive victories over the iconic James before finally dropping the belt at LockDown. Despite losing the title, Rayne could take solace in the fact that she surpassed Awesome Kong‘s 178 day reign by 10 days to mark the longest Knockouts Title reign in history at 188 days.

After losing the belt, the nine-month long partnership between Madison Rayne and Tara would finally implode in a moment that fans had been waiting for. Tara won her freedom from Rayne (she was previously indebted to Madison) after James again defeated her at May’s Sacrifice pay per view. Madison then turned her attention to Tara as the two finally faced off in a grudge match which was to be won by the veteran Tara.

After a short absence from the screen, Madison quickly re-emerged and found herself once again in a position of notability, seen schmoozing with then Knockouts VP Karen Jarrett on a regular basis. Aligning herself with the VP would have its benefits as she and the returning Gail Kim would successfully challenge for the Knockouts Tag Team Championships, ending Rayne’s year exactly the way it started — with gold around her waist.

In the latter part of the year, Madison announced that she had been crowned the new Knockouts VP, taking on a new hat and a new role of prominence on Impact Wrestling. Just like she ruled the Knockouts division with her 188 day title reign, it looks as though Madison will be as iron-fisted in her new position of power.

While TNA has brought in big names like Mickie James and Gail Kim in the past couple of years, Madison Rayne continues to be one of TNA’s most successful homegrown Knockouts, and no matter the direction of the division, she always seems to find a place. It’s not hard to see why, either, as Rayne knows her character inside-out and has all of the nuances down pat — including the patented shrieking — as well as delivering strong, often amusing, promos on the microphone and in backstage segments. Though not exactly on par with her stellar 2010, 2011 was almost as consistent for Rayne. TNA’s vote of confidence in Rayne to take on the new role of VP, which requires more personality and less wrestling ability, is another testament to her versatility as a performer.

Outside of TNA, Rayne also returned to SHIMMER as Ashley Lane at the October tapings, feuding with her former tag team partner Nevaeh. Madison’s return was a welcome surprise and shows that despite hitting the big time, she still remembers her roots.