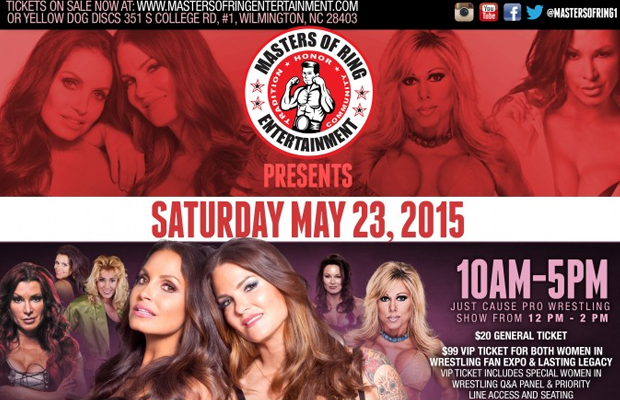 This Saturday in Wilmington, North Carolina, Masters of Ring Entertainment will showcase the first ever women’s wrestling expo: the Women in Wrestling Fan Expo, headlined by WWE Hall of Famers Lita and Trish Stratus.

They will be joined by legendary Divas Victoria, Ivory, Terri Runnels, SHINE Champion Santana Garrett and GLOW star Little Egypt for a day filled with autograph signings, photo ops, Q&A sessions and an all-women wrestling tournament presented by Just Cause Pro Wrestling. The tournament will run from 12pm to 2pm.

That evening, various women will be honored in “Lasting Legacy”, a Hall of Fame-style event headlined by Trish and featuring Lita, Victoria, Ivory and Terri Runnels. It will be co-hosted by legendary wrestling personality Missy Hyatt.

Diva Dirt’s Chris will be on the scene, providing coverage of the event all day Saturday.

For the full schedule of events including signing times, check out the press release below or visit MastersofRingEntertainment.com.

May 18, 2015 – WILMINGTON, NC: – Masters of Ring Entertainment, LLC, a special events pro wrestling organization, is pleased to announce that Missy Hyatt will be co-hosting with WGNI’s Jackie Jordan for Lasting Legacy: A Tribute to Women in Wrestling. This will be one of two exciting special events this Saturday, May 23, 2015 at the Coastline Convention Center for women of wrestling fans everywhere.

The Women in Wrestling Fan Expo from 10 AM to 5 PM: A once in a lifetime fan convention featuring some of the greatest legends in the history of the sport. A special Team Bestie photo opportunity featuring WWE Hall of Famers Trish Stratus, and Amy ‘Lita’ Dumas is available from 12 PM – 1 PM, as well as solo appearances by Trish Stratus from 10 AM – 12 PM and Amy Dumas from 1 PM – 3 PM Also appearing will be Lisa Marie Varon a/k/a: WWE’s Victoria and TNA Knockout Tara, Lisa ‘Ivory’ Moretti, Former WWE Diva Terri Runnels a/k/a WWE’s Marlena, GLOW legend: Little Egypt, Former WCW Star Missy Hyatt, and current NWA Women’s Champion, Santana Garrett a/k/a: Brittany in TNA. Also during this event, there will be an all female pro wrestling spectacular tournament brought to you by Just Cause Pro Wrestling. The live in-ring action will be featured from 12 PM to 2 PM.

For the full schedule visit MastersofRingEntertainment.com.

Lasting Legacy – A Tribute to Women in Wrestling from 8 PM to 10 PM: A hall of fame style event honoring the women of pro wrestling. This is the first time ever that the women of pro wrestling have ever been honored for their accomplishments and contributions. The event is to be headlined by Trish Stratus, and is also featuring Amy Dumas, Lisa Marie Varon, Lisa Moretti, Terri Runnels, Little Egypt, Missy Hyatt and more. This event will be co-hosted by Ex-WCW Star, “The First Lady of Wrestling” Missy Hyatt with WGNI’s Jackie Jordan! Food options will be available for purchase. General admission to the event is $30. VIP tickets are $99, which includes the VIP ticket to the Women in Wrestling Fan Expo.

Given Missy Hyatt’s noted energetic, entertaining, and sometimes controversial history behind the mic, this event it just got even more exciting! No slouch on the microphone, Missy was once offered a role to replace Rowdy Roddy Piper in the WWF and host her own talkshow. Come see Missy do what she does best, and entertain the masses! We are honored to have Missy and give her the true spotlight and recognition that she deserves. She’s one of the true pioneers in this industry and is often unfortunately overlooked. Her beauty, grace, poise, and mastery of the microphone really created the mold for the modern-day Diva. From her groundbreaking feuds in the UWF and time spent in WCW and ECW, Missy is one the most well-traveled, and highly respected figures in pro wrestling history. It is truly an honor to have her as a host of this once-in-a-lifetime event.

This fun filled day will take place this Saturday at the Coastline Convention Center at 501 Nutt St in Wilmington, North Carolina. Tickets and more information available at MastersofRingEntertainment.com and at Yellow Dog Discs at 351 S College Rd #1 in Wilmington, NC.