TNA Final Resolution in Review: Gail and Mickie Right a Past Wrong 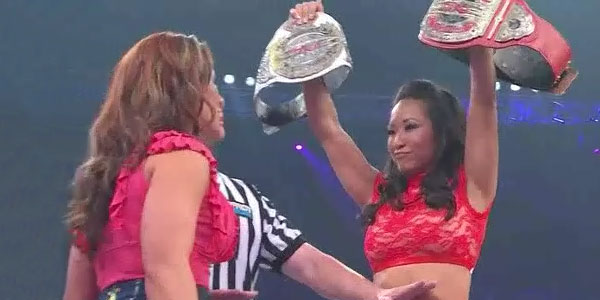 Welcome everybody, and yes, it’s Monday, so you know what that means… TNA pay per view last night! It was a stacked show from top to bottom, but the Knockouts portion brought forth… (enters Christy Hemme mode)… current reigning and defending TNA Knockouts Champion, Gail Kim, as she put her title on the line against the top contender, Miss Hardcore Country, Mickie James! It was a pretty hyped match considering their infamous past encounter in WWE, but can they make up for it this go around?

First, we check out a video package depicting Mickie James’ road to contendership for Gail Kim’s Knockouts Title. After some quotes from our beloved, benevolent, gracious activist in this sea of scantily clad femininity, Miss Karen, we head to the ring as the commentators go through… um, the video package again? Oh wait, I get it! TNA is rewarding me with an early Christmas gift by showing me these clips of Miss Karen all over again! She is, after all, so nice we get to see her twice! The entire video runs through a second time, and once it finishes, we finally head out to the ring and get things underway with some good ol’ fashioned… (clears throat)

Mickie skips out looking top notch in her southern finest, as she proceeds to rock my world with her thrillbilly sound while executing a few poses. Out next comes the theme music that I randomly love as Gail Kim struts out holding all of her gold. Looking great as always, Gail walks to the side of the ring and taunts the fans with her belts before the referee holds the singles championship for contention. The bell sounds as the two ladies lock up into a corner. Gail charges, but Mickie moves out of the way and plants Kim with a drop toe hold.

They twirl around the ring for a few with some holds, before Gail kips up and reverses into a wrist lock. Mickie with a one armed cartwheel, but the experienced Champion knows those country tricks and proceeds to toss her down by the hair. Kim blows a kiss to one of her adorning fans, I’m sure, before going for a few punches that James blocks. Mickie manages to plant Gail with her one armed neckbreaker for a two count, before losing the momentum she had to the Champ. Gail with an uppercut to send Mickie into the ropes, as she then Irish whips her onto the opposing side.

Mickie tries to slide under Gail’s legs, but Gail backs up and lifts her by the hair. James counters with a snapmare into a baseball style dropkick to send Gail into the corner. Mickie charges forward, but Gail slithers onto the top rope like a snake, and goes for a flipping type roll up, only the challenger holds onto the ropes and screams “I DON’T THINK SO!” Mickie proceeds to elbow Gail in the face and go for her Mick-A-Rana, but Kim flips it over and DRILLS her face first into the canvas with a sort of reverse style Alabama Slam.

As I grab my own face in pain from that impact, Gail begins to stalk her prey and kick Mickie in the head. She continues to taunt her some, before running off the ropes with a clothesline for a two count. Gail covers Mickie and pounds away for a near fall, then proceeding to hit a sick backbreaker. She keeps the hold in tact, as she lifts Mickie back up, only Mickie counters into a really unique roll-up for the close count. Nice move! Both women try to get back up, but Gail runs forward and sucker punches Mickie in the face for a two count. Some mixed chants begin, as Gail continues to just take Mickie down with some kicks, before locking in an Indian Deathlock type submission to the knee!

Mickie screams in pain, as Gail transforms the hold into a move I remember seeing her use before where she bends Mickie’s legs over her head. James grabs onto the hair and starts pulling, which eventually stops the pain. James with some punches, but to no avail as Gail kicks her into the ropes and proceeds to choke. Kim sends Mickie into the corner and goes for her elastic type swing through the ropes, only she moves and Gail flies out of the ring and lands pretty nasty with her knee colliding into the steel steps! Good lord…

Gail crawls onto the ring apron, as Mickie flips her back over and begins to control the match with a Mick-A-Rana. Some clotheslines follow, as Mickie tries to get the crowd on her side with a flapjack/kip up combo that makes me stare in awe every time. She goes to the top rope, but Gail kicks her leg off and climbs to the top rope. A “Gail Kim Sucks” chant erupts, as she goes for a top rope hurricanrana… only Mickie holds on and Gail falls down. Mickie with a Thesz Press off the top rope for a two count! James goes for the Mickie-DT, but Gail counters into what looks to be her Eat Defeat, only Mickie dragon-screw’s the leg over and she falls outside the ring.

Mickie tries to invite Gail back into the ring, but Kim simply takes her titles and begins to high tail it out of the arena. Mickie follows close behind and slaps her in the face, before going to drag her back towards the ring. Gail stops her with a kick to the midsection, as she tries to Irish whip Mickie into the turnbuckle, only Mickie reverses it and Gail is sent FLYING like a dang squirrel into the pole. Mickie smiles at this, as she drags the champion back into the ring… but as she climbs back up herself, out runs Madison Rayne who distracts Mickie long enough for Gail to hit the Eat Defeat off the ropes for the victory! Gail Kim retains her title!

Thoughts: I actually really liked this match. I wasn’t sure going into it how things would go since… well, I don’t need to get into it, but I thought Mickie and Gail worked great together. That spot where Gail’s knee hit the stairs looked like it wasn’t supposed to happen, and hats off to her for continuing on with the match because it seemed to be incredibly painful looking. I wasn’t crazy about the finish because I feel like this is how Gail is winning all her matches, and while I get the stable and all, I don’t think someone who holds both titles should have to cheat to win every match. I don’t mind it once in a while, but I think it’s nice to have a Champion win on their own merit. Hopefully this feud continues on, or at least, Gail’s title reign does because the hot potato games seemed to have finally cooled down for now. Overall, I’d definitely say that I think this match has finally made up for that… once again, I don’t need to bring it up. Let’s all think of this outing when we hear the words “Mickie vs Gail” from now on.