TNA No Surrender in Review: Was the Crowd Really Chanting That? 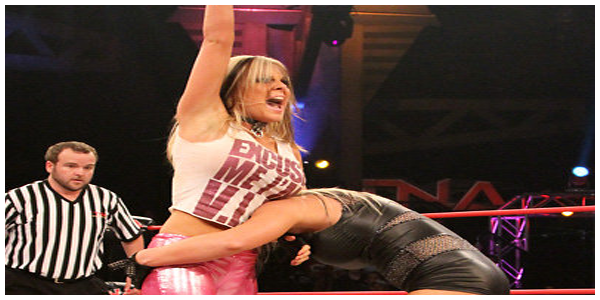 After several weeks of all the talking behind each others back, all the backstabbing, and catfights, FINALLY it’s Velvet Sky vs Madison Rayne in a grudge match… with Angelina Love and Tara both at ringside. Instead of  having the two fight woman to woman, my suspicions about outside interference were starting to look correct.

Madison Rayne is the first to make her entrance out to the ring accompanied by Tara on the motorcycle. I’m going to go ahead and assume that TNA Management seen my request regarding Tara and Madison because when they are on the ring apron, Tara decides to smack Madison’s a** before the two kiss each other.  The beautiful theme song continues to play as Velvet Sky makes her way on to the ramp with her BFF, Angelina Love. They do the usual “Dancing With The Stars” routine before strolling down to the ring, smiling like they’re friendship has never hit a slight speed bump.  While Velvet and Angelina were on the ring apron doing their vintage booty shake on the middle rope, Tazz makes it seems like Angelina has a bomb implanted inside of her boot. Wiring device? Really Tazz??

The match has finally started and it hasn’t even been a full 10 seconds before Tara takes it upon herself to grab Velvet’s foot before throwing her hands up innocently causing the ref to get distracted with her, giving Madison the opportunity to take a cheap shot at Velvet. Madison then takes Velvet and slams her head into the turnbuckle before using her boot to start choking Velvet. At this point I’m trying to figure out if the Impact Zone is chanting what I thought they were chanting or was it just me hearing voices because of Madison’s short shorts.  After the  ref warns her about the boot to the throat, Madison takes a shot at Velvet and turns around to Angelina, striking a pose while Tara begins to fan herself.

Madison goes to continues her beat down, only to be met with a stinging chop to the chest by Velvet. She delivers another chop before pushing Madison against the ropes for an Irish Whip attempt, but Madison counters and pushes her down by the head. Madison jumps on top of Velvet and starts to throw punches at her while Velvet puts her hands up for protection.  Madison screams bloody murder at the ref for warning her about the close fists and shrieks again while she starts to choke Velvet out.  Before the ref got to the count of five, Madison gets Velvet to her feet and starts to wrench her neck around like she twisting a cap off of a giant beverage. After figuring out that her head wasn’t going to come off, Madison throws Velvet back down on to the canvas and applies the “sexy”  camel clutch submission.

Madison stands up, drops down on Velvet’s back, and drags her out to the middle of the ring to reapply the clutch.  The ref begins the count and tells a confused Madison that she needs to stop clawing at the face of Velvet. Madison tries to jump down on Velvet’s back again, but instead gets two kneecaps into her goodies. Velvet holds on to her own goodies, mocking Madison and screams “Poor baby!’ before delivering a vicious slap.

Tara was having none of that as she gets on the apron chewing out the ref , temporarily distracting him while Velvet rolls Madison up for a pin. The ref slides back in for the count,  but Madison was able to kick out before the three. Madison springs back up and stops Velvet’s momentum with a flying clothesline.  Madison now has the match back into her control and starts to dig her fingers into Velvet’s skull. Speaking of skulls, Madison then wraps her legs around Velvet’s head, turns her over, and begins to drive her skull/face into the match while Tara hilariously bounces her hands up and down in sync with Madison’s skull bashing.

Thinking that Velvet is done for, Madison goes for the pin and Velvet kicks out. Madison goes for another quick pin, but again, Velvet kicks out.  Madison backs Velvet up into the corner and Irish whips her to the opposite turnbuckle. Velvet reverses, sending Madison running into the corner. Madison tries to leap over Velvet, who is running behind her, but gets caught and slammed front first into the mat. Both women are out of it as their friends on the outside begin to encourage them to get to their feet. Madison is up first. She walks over to Velvet, trying to give her a double ax handle to the back but gets slapped in the midsection. She tries to go for it again, but Velvet repeated her slap to the midsection. Madison grabs her stomach in pain while Tara yells, “Come on baby!” (So freakin’ cute.)

Velvet  runs towards Madison and tries to give her a clothesline, but ends up missing her completely (It’s okay, though. She apologized for it).  Madison is quickly back on her feet, but Velvet is on her just as fast and delivers a nice clothesline. Madison tries to run after her again, but instead runs into a nice shoulder block from Velvet, who is completely fired up at this point.

Velvet grabs Madison and Irish whips her into the ropes. Madison reverses and bends over, looking for a big back body drop, but gets a kick to the face before getting hit with a spear. Velvet climbs on top of her and starts to drive Madison’s head into the mat repeatedly. Velvet starts to give Madison a taste of her own medicine by delivering similar shots to the back, which she was on the receiving end of earlier in the match. While Madison tries to recuperate, Velvet drives her face down onto the mat with the running bulldog.

Velvet goes for the pin, but is immediately pulled out by Tara. Tara grabs her helmet and tries to repeat her actions from this past Thursday’s IMPACT before Angelina comes to the rescue and delivers a kick to her lower back. When Velvet gets back into the ring, Madison tries to execute her finisher , but Velvet reverses and hits Madison with the DDT and picks up the win.

Despite the fact the fact that Angelina and Tara both accompanied their partners to the ring, I must say that I am pleased with the lack of interference. I liked it was just limited to a few basic things. Things that you expect to see when  partners/managers on the outside. I honestly thought there was going to be an overload of interference, but Velvet and Madison were able to get a lot of time to wrestle on their own in the ring without any help from the two on the outside. Also, I felt that there was a clear vision of who was the face in this match and who was the heel. Nothing in between.

I wasn’t feeling the majority of this match. It dragged on a bit and I think Madison’s and Velvet’s styles both clashed. Velvet is more of a brawler than a wrestler and I think it showed for the most part. But I thought she was beginning to catch fire towards the end when the crowd really began to get into it.

So what next? To be honest, I can smell some sort of tag team match for the next PPV (maybe even sooner). I think TNA needs to get rid of the Knockout Tag Team Titles and start putting more women on TV.  Revolving the division around these four women isn’t going to work forever and I think fans are starting to get a bite tired of it already. I know I am.