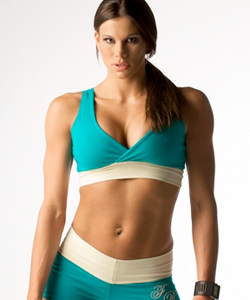 Nearly 10 years ago she proved that she is indeed Tough Enough and now, in 2011, Jackie Haas is bringing that expertise to Diva Dirt!

We are pleased to announce today that Tough Enough 2 champion, former WWE Diva and former TNA Knockout, Jackie Haas, will join our coverage of the upcoming USA Network revival of WWE Tough Enough.

Beginning next week, Jackie will pen a weekly blog exclusively for Diva Dirt, giving our readers unique insight and opinion on the series from a former winner. Read Jackie’s blogs as she discusses the contestants, trainers, challenges, eliminations and more using her own experiences on the previous incarnation of Tough Enough which aired on MTV.

Jackie will also join us on Diva Dirt LIVE tomorrow night at 10pm to discuss her time on Tough Enough and take your calls!

About Jackie
After winning Tough Enough 2 in 2002 along with Linda Miles, Jackie went onto become a full-fledged WWE Diva, going by the name Miss Jackie, for three years. In 2004, Jackie competed at WrestleMania XX in a Playboy Evening Gown Match, teaming with Stacy Keibler against Sable and Torrie Wilson. Jackie again returned to WWE in 2009 competing in the 25-Diva Miss WrestleMania battle royal.

Following the end of her run in WWE in 2005, Jackie joined TNA Wrestling and was voted Knockout of the Year that same year.

Presently, Jackie is a regular fitness competitor and spokeswoman for HMB.

Jackie is married to wrestler Charlie Haas. The couple have three children.