With the second episode Tough Enough in the books, it’s time for another Redux. This week, the contestants take on their first wrestling-related challenge and (because this is a reality show) do plenty of arguing. Let’s dive in.

The first competition saw the trainees head to a good old fashioned Florida swamp, where they were commanded to swim to an air boat and back, toting back NXT Championship belts.

Dianna impresses for the second week in a row, blowing everyone out of the water with her swimming skills. It’s not even close.

Three of the male competitors don’t even finish. Alex and Patrick can’t swim, while Mada just runs out of steam.

One other moment of note comes when Daria fails to bring her NXT Title belt back with her, dropping it in the swamp. She gets chewed out by Billy Gunn and looks like she’s about to burst into tears. She eventually does on the ride back.

Like last week, there were plenty of arguments in the house. While arguing with Patrick, Alex stupidly said that there’s no need to have wrestling knowledge to compete in this competition. Uh…………..

Dianna was again at the center of the drama, but this time Gabi – her nemesis from last week – is the only one to take her side. Dianna argues with just about everyone, angry that they’ve dubbed her “Princess Dianna”.

She has a big blowup with Daria that Amanda gets involved with. You know, you’d think these people would be aware of how fast a bad reputation builds in wrestling…

Dianna eventually strikes a bargain with ZZ to switch bedrooms so she won’t have to room with the rest of the girls. Yeah, that will help your reputation.

The second competition was the first to actually incorporate in-ring skills. The competitors take their first back bumps before being challenged with taking a bump off of a platform on the top turnbuckle.

The trainers make it clear that this challenge isn’t mandatory (Lita admits that she wouldn’t do it with the condition of her neck), but from what I can tell, no one opts out.

All of the women appear to do well…except for Dianna. She appears to take forever to take the bump, standing atop the platform for a long time before finally dropping sloppily.

Lita singles out Giorgia as the best bumper out of the women, making her the female winner of that challenge.

At the end of the night, judges Paige, Daniel Bryan and Hulk Hogan choose the bottom three. Paige selects Sara, complaining that she is doing nothing to stand out. Daniel chooses Alex. Hulk chooses Dianna, claiming that she doesn’t have a “locker room mentality”.

Each of the bottom three are given a change to plead for the viewers to save them. Sara says she has a true respect for the business and won’t get into fights just to get more camera time. Dianna sounds a little more rehearsed, claiming that she’s “best for business”. In the end, it’s Alex who gets the axe. Dianna and Sara live to see another day.

In some bonus clips, we see Lita advise Amanda to find a way to stand out, a wildlife expert introduce the contestant and trainers to some of the swamp creatures, Daria’s lost belt is retrieved and Dianna and Giorgia evaluate their performances:

Here, I’ll break down my impressions of each of the female competitors, based on their performance in the episode. Lita and Paige get some love too.

Amanda: All we really saw of her this week was the development of her friendship with Daria. She seems to take the driver’s seat in her and Daria’s argument with Dianna and Gabi, showing fire that was absent from the rest of the episode. I have a feeling she’d be getting the Sara Lee treatment from producers if she didn’t jump into that argument. Paige seems to agree, since she called out Amanda the same “forgettable” qualities as Sara.

Daria: I picked her as a nearly favorite, but now I’m not so sure. I just can’t root for someone who deliberately picks on someone like she did to Dianna. If Dianna was instigating arguments or had done something to personally offend Daria, I might understand why she Daria was so aggressive here. As it is, she looks like a bully who’s found an “easy target” in Dianna. I don’t like bullies. Her dropping the belt in the swamp wasn’t a smooth move either. If she wants to run her mouth, the least she can do is up her game in challenges.

Dianna: The show has definitely found its villain, but I don’t think she’s going to let them portray her that way. She’s getting ganged up on from all sides, and though she can impress in challenges, she’s not getting a ton of credit for it. She’s not a bad person, but she’s not exactly likable either. If she was, we wouldn’t have the entire cast ready to mock her. I admire her for kicking ass in the swamp challenge, but her failure to take a bump doesn’t bode well for her in-ring prospects. Of course, though, we’re still in the early stages, so I’m not going to call her a flop just yet. I’m just tired of the Dianna drama already, and we’ve got a long way to go until we reach the end.

Gabi: Surprisingly, Gabi sided with Dianna this week. That makes me think she’s not as much of a bitchy stereotype as I first took her for, so that’s a plus in her column. I wanted her or Dianna to smack Patrick for his “kiss and make up” nonsense. I know he’s 19, but it’s lame for him to turn a normal conversation with two grown women and immediately sexualize them. It gives me the sneaking suspicious that he doesn’t interact with many women. On a more positive moment of objectification, I think Gabi had the line of the night when she straight up admitted that Roman Reigns made her wet. Don’t hold back, now!

Giorgia: It was nice to see Giorgia console Daria after she got chewed out by Billy. She definitely seems like a good person. We’ll see if that changes. She was also in the anti-Dianna boat, though, accusing her of bending the rules in the swamp challenge. She gets major points from me for winning the first wrestling-related challenge.

Sara: Again, Sara wasn’t seen much here. I don’t think that means she’s a goner, but she definitely needs to stand out to be a successful Diva, so being a ghost isn’t good. I totally get what she said in her bottom three speech, though, and admire her for not wanting to play into the reality show stereotypes. To be honest, I’d probably suffer from Sara Lee syndrome if I were on a reality show, disappearing due to lack of drama, so I can relate to her on that level. I hope once we get into more in-ring challenges, she’ll find a chance to shine.

Lita: We saw more of Lita this week, but sadly she’s not a showy trainer, like Booker or Billy. I admire her for admitting that she wouldn’t take the top rope bump. The mini video package of her in-ring work was a cool touch, too.

Paige: Paige is quickly proving herself to be the harshest of the judges – in a good way, of course! She cuts right to the chase, kind of serving as the yin to Daniel Bryan’s yang. I get why she called out Amanda and Sara for being virtually MIA, but being a reality show star herself, surely she realizes that some things are out of their control. Personally, I wouldn’t put someone on the chopping block for not getting into drama, but I’m sure Paige knows more about what makes a WWE star than I do, so… 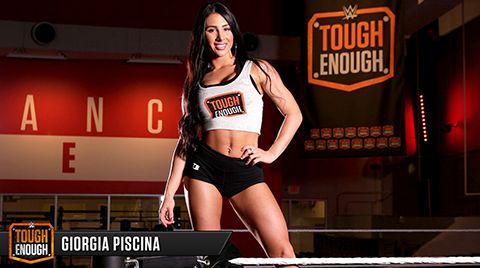 Giorgia. Winning the first wrestling-based challenge goes a long way in my book. Dianna won a challenge too, sure, but swimming doesn’t really come into play in the ring. Giorgia also largely stayed out of the drama and looks to have a good head on her shoulders. If she can continue to show the most potential as a wrestler, my esteem for her will grow quickly.