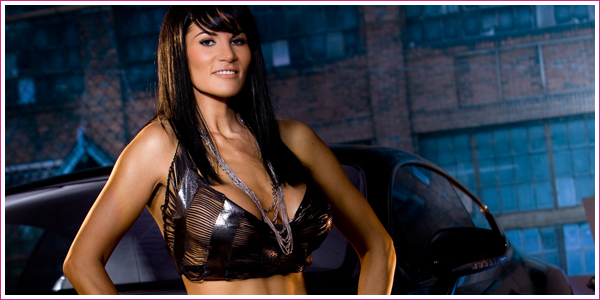 It’s the day of reckoning for ‘Original Flavour’ TNA Knockout, Traci Brooks. The first part of her Playboy photoshoot is now online for the world to see, with the second part being released on October 1st. Check out highlights of the Playboy.com interview with Traci:

PLAYBOY: While you were in Iraq, you had an awkward injury. What happened there?
BROOKS: [Laughs] Yeah. I was in Iraq entertaining the troops and I got to shoot an M240, which is basically a big-ass gun. I had a low-cut shirt on and the bullet shells fell back and down into my shirt. I thought I melted my implant, but I didn’t. It burned my nipple, though. Burned the damn thing right off! The poor medics out there didn’t know what to do.

PLAYBOY: What’s the best part about having sex with a female wrestler?
BROOKS: We’re pretty feisty. My fiancé has a few bruises on him. [Laughs] We’re always out to prove something. Women are usually very passive people. Women wrestlers are very aggressive.

Click here to read the full interview. The second part of Traci’s photoshoot will be released on October 1st. Click here to subscribe the Playboy Cyber Club to see the pictures. They are also floating around on several other sites, we however, have opted not to publish them due to legal reasons.