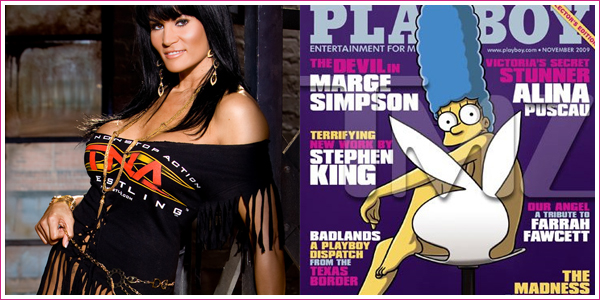 TNA Knockout, Traci Brooks was delivered a blow when her Playboy cover — which had been pencilled in for November — was instead given to the late Farrah Fawcett. Traci graciously conceded the spot to an American sex symbol and icon, who was previously graced the cover twice.

But in what can only be described as a double blow for the original Knockout — the November cover has changed again. In what will likely be an iconic moment in pop culture history, Marge Simpson will grace the cover of November’s Playboy.

I don’t know if Traci should consider this a compliment or not; on the one hand, The Simpsons are America’s favourite family and a billion dollar entertainment brand. On the other, the editors picking an animation over you has to lower the old self esteem, right?

Click here to listen to our interview with Traci.