Welcome to this week’s edition of Unwrapped! As always, we will be grading all of the new photoshoots (or “eye candy”, as we like to call them) from the week gone by, judging them like so:

You, the reader, will also get the chance to grade the “eye candy” yourself by giving your opinion on each shoot and voting for your favorite out of the whole bunch. Now, dive in!

Note: We missed a Bella twins shoot from a few weeks ago, so I’m covering it now. I do not hold responsibility for any possible overdose on the Bellas suffered during the viewing of this post. 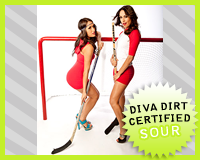 Brie & Nikki Bella‘s Goaltending
Grade: Sour. Continuing with the “Bellas do sexy sports shoots” trend, Brie and Nikki are posing in front of a goal with hockey sticks. I’m not quite seeing the point of the Bellas doing a hockey-themed shoot, and I see even less of a point of doing it the way they’re doing it here. The poses are pretty dumb, especially the ones using the sticks in a “suggestive” manner–it just looks silly and about as subtle as a hammer to the head. That, paired with their clashing outfits (Brie in a baseball-type shirt and skirt and Nikki in a dress) make for a confusing photoshoot. It’s like they took a meh concept and injected it with so many different ingredients that it came out stinking to high heaven instead of just being boring. I vote that the Bellas take a break from the contrived sports-themed shoots and do more shoots like the one below..
• Click to see the rest of the photoshoot.
[poll id=”497″] 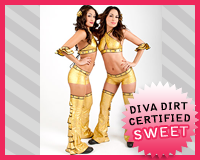 Brie & Nikki Bella‘s Marigolds
Grade: Sweet. Unlike the shoot above, the Bellas keep it pretty simple in this one, relying on their matching outfits and twin chemistry to drive the shoot. Personally, that’s how I like these tandem shoots to be done instead of the bar advertisement-worthy ones the WWE ropes them into sometimes. The ring gear they’re wearing here is bright gold and chock-a-block with ruffles–it probably isn’t everyone’s cup of tea, but I like it for the theme they have going with their gear. As long as they keep it the a single color, these tights can keep from looking too tacky. Their poses, without the lame props to detract from the shoot, simply consist of them standing next to each other, but they compliment each other well and make it interesting–they play off each other well and don’t just look like two random girls put into the photoshoot together. This, I believe, is how the Bellas’ photoshoots should be–plenty sexy, but not cheesy.
• Click to see the rest of the photoshoot.
[poll id=”498″] 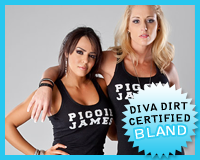 Layla & Michelle McCool‘s Mean Girls
Grade: Bland. It was only a matter of time until Michelle and Layla showed off their “Piggie James” shirts in front of the camera lens. As much as Diva Dirt is annoyed by this storyline, I like that (if nothing else) provides for a tag team photoshoot, something we don’t see often, aside from the Bellas. It shows the chemistry that a team has (or doesn’t have) and tends to be a nice break from the solitary photoshoots. Here, Layla and Michelle show off their best bitch faces, which doesn’t provide for a very versatile shoot, but they still work well together within the confines of the shoot–I quite like the arms-around-the-shoulders pose. Still, they could have done much more with the opportunity. Hell, I should just be glad they didn’t bring in cans of SlimFast to pose with.
• Click to see the rest of the photoshoot.
[poll id=”499″] 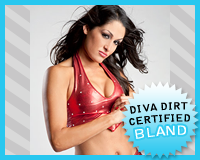 Nikki Bella‘s Better, Faster, Stronger
Grade: Bland. Clearly, Nikki can handle a photoshoot on her own, as her poses and presence are more than enough for one Diva–not just one half of a team. The ring gear is pretty interesting too–for as much as the Bellas overuse the color red, I like how it’s used here, and the rhinestone detailing looks more like a cool pattern than a tragic bedazzling accident. However, it struck me when looking at this shoot that Nikki tends to stick to one facial expression for most of her shoots–her arched eyebrows being the dead giveaway. I wish she’d show a bit more versatility in that area, because there’s only so many times a Diva can use the “bitch please” face in a photoshoot before it gets to be old hat.
• Click to see the rest of the photoshoot.
[poll id=”500″] 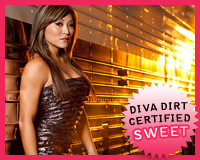 Savannah‘s Driving Force
Grade: Sweet. One wouldn’t automatically think that the side of a Greyhound bus would serve as a prime setting for a photoshoot, but Savannah has proven that it can be, under the right circumstances. The lighting provided by the setting sun casts her reflection against the metal of the bus, makes for some interesting shots. Savannah herself doesn’t look too shabby either, as her ruched metallic dress almost recalls the texture of the bus, in a weird way. Her poses are a lot better too, as she’s switching it up more and showing a more diverse array of emotions. She looks fantastic. Sidebar comment: I can’t help but think, though, that if she were on television as often as she appears in photoshoots, she’d be one of the most overexposed Divas on the roster. I’m not saying that I don’t enjoy her shoots, but it gets tiresome to have the same or slightly different combination of Diva photoshoots week in, week out (Savannah, Natalya, the Bellas, Tiffany.. Rinse and repeat). I’m not sure why I’m taking it out on her, but whatever. Still, kudos on this shoot Savannah!
• Click to see the rest of the photoshoot.
[poll id=”501″]