Unwrapped: Melina Emerges from the Shadows 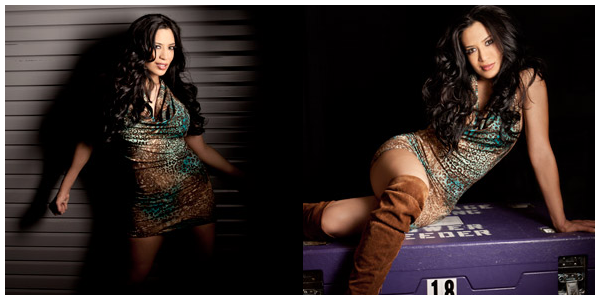 Our Unwrapped feature is making its return! Every Thursday, coinciding with WWE.com’s weekly photoshoot updates, we’ll take a look at the newest Diva photoshoot and give you the opportunity to voice your opinions on it. Let’s unwrap this week’s eye candy..

It seems like it’s been forever since Melina has had a published photoshoot. It’s been so long, in fact, that her latest shoot featured her posing with her long-lost Divas Championship, which, by the way, she lost in September. It’s a shame, because Melina’s photoshoots usually have a pizzaz to them, a certain spark that tells you that she’s always trying something new, whether through it’s a pose or a clothing choice. Does this new shoot deliver that same feeling? Let’s see: 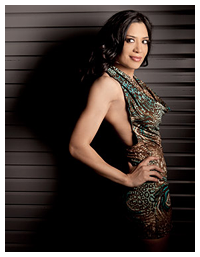 The Look: If Melina’s got a “theme”, wardrobe-wise, it’s animalistic. Whether that’s shown through furry boots or all-over animal print, it’s usually present in some form or another. Here, she’s donning a turquoise and brown dress with a smattering of cheetah print, paired with brown over-the-knee suede boots and a curly mane of hair. Yep, this is Melina to a T. The outfit is flattering and sexy without showing too much: exposing her back instead of her chest is a lot more alluring, in my opinion. She works the outfit well.

The Poses: The poses and setting are interesting; half-hidden in shadow, Melina looks mysterious and sexy, and the photos manage to make (what looks like) a garage door look artistic, which is a feat in itself. Melina mixes up her poses and relies on a few old tricks (the “hand up” pose), which make for some really interesting photos; most are intriguing rather than cheeky. The exception to that, of course, would be two of the poses on the trunk (you know which ones I’m referring to). Let’s just say that if the cameraman worked for TMZ instead of the WWE and caught Melina in those poses, we’d be seeing almost as much of he as we’ve seen of Paris Hilton in the mere act of getting out of a car. For the most part, I appreciate the relative simplicity of the shoot and how she managed to pull a lot of sexiness out of just lighting and facial expressions.

Originality: The lighting, with the shadows enveloping part of Melina, are certainly different from the brightly lit studio photos we’ve seen from her lately, giving the photoshoot an intimate feel that makes it stand out. It’s not dramatically different from other Melina shoots, but a few tweaks (the lighting, the placement of her arms) are enough to make this shoot feel unique.

Overall: I really like it. It’s purely Melina, from the animal-print dress to the high-heeled boots to the relaxed poses. I like when a photoshoot reflects a Diva’s personality and style so clearly while mixing things up enough to ensure that it doesn’t feel like we’ve seen it a hundred times before. This photoshoot accomplishes that completely. Rating: 4.5/5

What did you think of the photoshoot? Give us your rating in the poll below and share your thoughts in the comments.