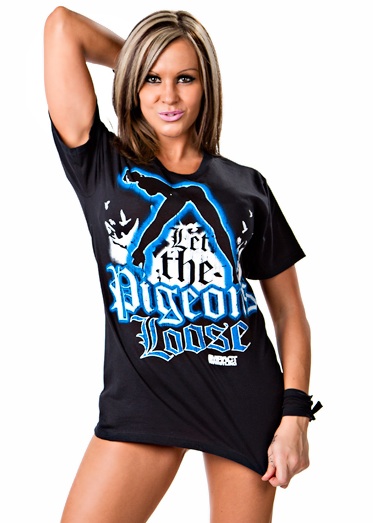 Talking about breaking out as a singles wrestler compared to being part of the Beautiful People, she says:

It was me and Angelina [Love in the Beautiful People]. I was never able to shine really and do anything on my own because she was always in the spotlight.

Since then, they’ve broken up the Beautiful People, which I’m sad about because I wish they were still going forward with that. We had a lot of fun, her and I together, but I just feel like they broke us up, and I was able to be on my own as a singles competitor.

I just feel I have grown in the sense of you don’t have someone to have your back all the time. You don’t have the option to tag out and recuperate. I feel, more or less, being a singles competitor instead of in a tag team has helped me branch out and come into my own as a performer.

Talking about the time and effort given to the Knockouts on TV compared to WWE’s Divas, Velvet says:

It’s awesome here because TNA lets us explore character development. We are not just coming out there as girls wrestling and then you don’t see us for a couple of weeks. We get to do backstage vignettes and promos. They let us speak on the microphone, and we do a lot of it in the ring. You don’t see that elsewhere.

There are matches [elsewhere] where the girls will wrestle for three minutes or so and go to the back. They don’t say a word, and you really don’t know who is who. Here [TNA] we are so grateful we get the chance to be able to come into our own, have time to talk and have our characters develop. I just feel like that has us connected with the fans more.

However, Velvet gives her frank assessment on an area she feels TNA could improve with the Knockouts, adding:

The one thing that I would like to see for the Knockouts in the future is for there to be more girls in our tag division. I think it’s not strong enough because there aren’t enough tag teams and girls for it. I hope somewhere down the line that there is a little bit more focus on the Knockouts tag titles.

Thoughts: I have to agree with Velvet when it comes to the tag division. I would like to see more teams and emphasis on that as well as the Knockouts Championship.