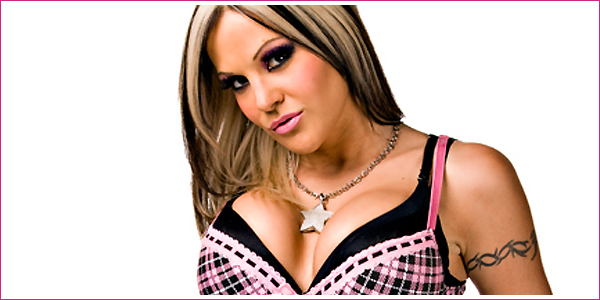 “It came out of the blue,” Sky said. “We did three TV tapings. She was supposed to go to [TNA’s] Germany tour. The travel was booked, and the pay-per-view match was booked. It was supposed to be her and I against Sarita and Taylor Wilde.

“A week and a half after we finished the TV tapings is when I got the phone call, saying this is what happened. `Oh my God.’ TNA reassured me that Madison and I were going to keep the group going. They weren’t going to let the group die. They said we all worked so hard, and we were so good in that group. So we were excited about that.

“I keep in contact with [Angelina]. She is doing OK, and she is going to be just fine,” Sky said. “There was a lot of negative stuff that was said about her on the Internet like why she got fired, what’s going to happen. You can’t always believe what you read on the Internet.”

No mention however, of a possible return for Williams. Velvet also addresses the hierarchy within the group, interestingly enough something which we were talking about just yesterday:

Speaking on the addition of Madison Rayne to the team:

“She is an awesome addition. We didn’t have to tell her, `No, don’t do this. Do it like this. This isn’t how we do it.’ She just clicked right away. It was a very good choice because she really came into her own immediately, and I’m proud of her.”

Honestly, I can’t say I agree. Madison has always stuck out like a sore thumb in The Beautiful People, let’s hope that gets better over the coming months.