Video: Stephanie McMahon on Her Match With Brie Bella, the Claims Against Daniel Bryan 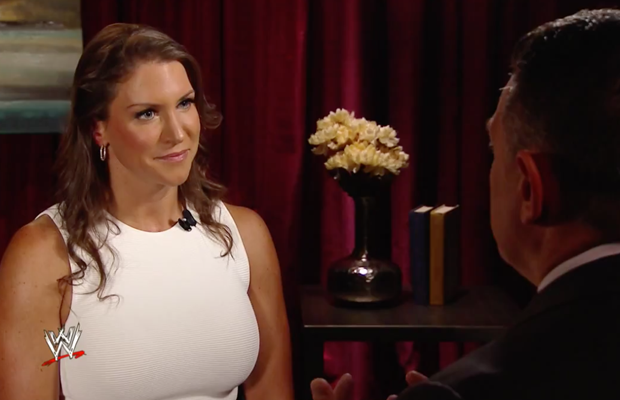 Ahead of her return to the ring this Sunday at SummerSlam, Stephanie McMahon sat down with Michael Cole to talk about her match with Brie Bella, as well as the claims of infidelity brought forward by Daniel Bryan‘s personal trainer, Megan Miller.

The legitimacy of Megan’s claims, she says, is for the authorities to decide. She says she brought Megan’s story forward because she thought it was in Brie’s best interest.

Stephanie acknowledges that it’s ironic that Brie was arrested for the same act she was, but claims that it wasn’t a set up aimed at getting herself out of their match at SummerSlam. She says she needed to air Megan’s claims publicly because Brie wouldn’t believe her otherwise.

When Michael infers that Stephanie might be embarrassed when she steps into the ring for the first time in over a decade, she refers back to the Pedigrees she hit on Brie and Nikki Bella. She calls Brie a “twig” and say she’ll throw her around the ring on Sunday.

What’s embarrassing, Stephanie says, is having to “lower herself” into getting in the ring with Brie. She says there’s “no question” that she’s going to beat Brie.

As for the possibility her tapping out to the Yes Lock, Stephanie says she doesn’t waste her energy thinking about something that’s never going happen. She says Brie won’t capture her in the submission hold again.

Michael makes the connection between her match and Daniel’s defeat of Triple H at WrestleMania 30, asking if this is an attempt to make up for that loss. Stephanie says that, at the end of the day, the Authority won, because Daniel Bryan couldn’t sustain his success and his now on the sidelines.

Closing out the interview, she says that she doesn’t want to embarrass or beat Brie Bella, but that’s exactly what she’s going to do this Sunday.