What is Women’s Wrestling’s Best Finisher? Round 1: RamPaige vs. Implant Buster 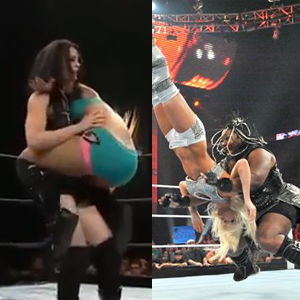 Round 1: Two women who have certainly done some damage on the indy scene, Paige and Kharma, are going toe-to-toe in the battle of the devastating finishing moves. One targets the head, while the other looks to obliterate some very expensive surgical enhancements.