What Ya Say, Cherry Darling? 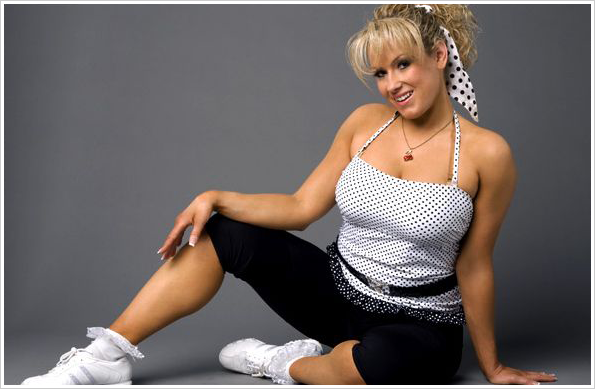 Whenever I see Cherry, I think of the time SD commentator Mick Foley starting singing Bruce Springsteen’s “Sherry Darling” modified to fit Cherry during one of her matches. So, needless to say, “You can tell her there’s a hot sun beating on the black top / She keeps talkin’ she’ll be walkin’ that last block” is running through my head right now. But enough about Springsteen – we have a photoshoot to judge! This one’s called “Bing” (yeah, I don’t get it either). Now, Cherry’s never produced the best photoshoots – her gimmick lends to more cubmersome attire (big polka-dotted tops, tennis shoes, black leggings) – but I always like to see her on WWE.com, mostly because she brings such a different look to the table.

Granted, all of her photoshoots look the same, but it’s refreshing to see a girl who’s neither making an “O” face, puckering, or sporting a ridiculous set of cleavage. Though I’d burn those black leggings, mostly due to the fact that they look like a longer version of the sliders I’d wear when I played softball – you know, what with the butt cushioning. I’ll admit that I don’t tune into SmackDown regularly, but apparently she’s been getting more active in the ring as of late, and is slowly but surely improving her in-ring work. If she can become a competent wrestler, I’ll be all aboard the Cherry fan train.