Who’s to Blame for Michelle’s Injury? 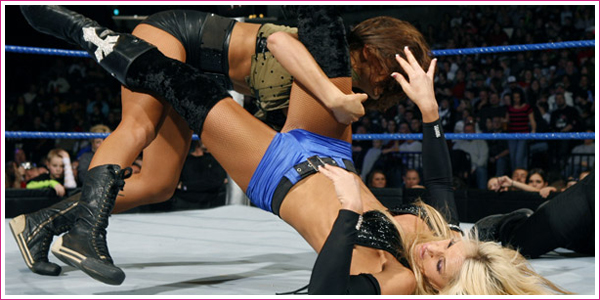 A source at the scene of the SmackDown house show where Michelle McCool was injured, e-mailed into Diva Dirt with more details of the incident that saw McCool tweak her left knee.

We’re told McCool’s opponent on the night, Eve Torres is at fault after a botched roll-up on the Women’s Champion. “Eve didn’t look good, she stumbled through the match and then screwed up the roll-up. You could tell instantly from Michelle’s face something had gone wrong.”

A second source confirms to Diva Dirt that Torres’  ‘akward’ roll-up was the cause, adding: “She [Michelle] rolled out of the ring immediately and looked to be in a lot of pain.”

Our second source says it best: “They shouldn’t let girls in the ring if they can’t do basic moves. So she can do a moonsault – big deal.”

Michelle is set to return to SmackDown next week.