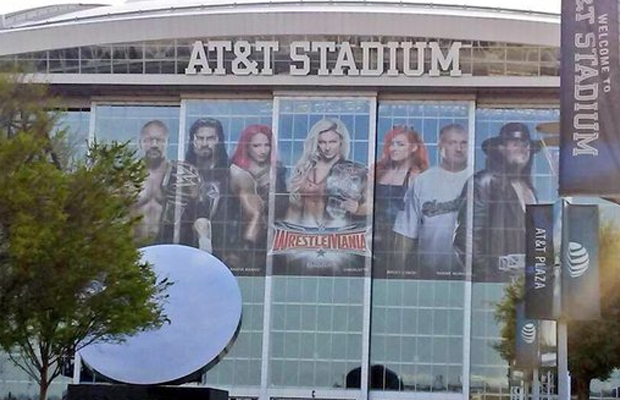 * Becky Lynch, Charlotte and Sasha Banks are featured on WrestleMania signage adorning the side of AT&T Stadium. (Twitter)

* NXT will reportedly tape its next television episodes during WrestleMania Axxess. (Wrestling Inc)

* Eve Torres spoke to WWE.com about her upcoming role on Supergirl. (WWE.com)

* Queens of Combat 8 saw Taeler Hendrix retain the QOC Title. (All Funked Up)

* Eva Marie recently spoke to E! Online about her friendship with Mandy Rose, returning from injury and more. (E! Online)

* Alicia Fox and Paige check in to a haunted B&B and Eva Marie and Mandy Rose talk about transitioning to the main roster in this week’s Total Divas bonus clips. (Video 1, Video 2)

* Charlotte, Eva Marie and Stephanie McMahon are among the stars making TV appearances next week to promote WrestleMania. (Wrestling Inc)

* Charlotte and Ric Flair made an appearance at a New York Knicks game yesterday. (Twitter)

* Rosa Mendes has returned to the gym yesterday for her first post-baby workout. (Instagram)