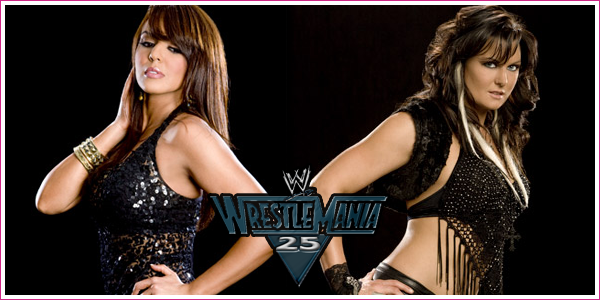 While WrestleManiaâ€™s 25 Diva battle royal might be a dream come true for some Diva fans, its a train wreck waiting to happen for most. What happened to the good olâ€™, one-on-one matchups. Well for the next few weeks leadingÂ up to WrestleMania,Â Diva Dirtwill beÂ  bringing you theÂ  Wrestlemania dream matches that we wish would happen or might even happen in the future. Welcome toÂ WrestleMania Fantasy Face-Off!

Match 2: Layla vs. Katie Lea in a Royal Grudge Match

After William Regal picked up in huge win over CM Punk to win the Intercontinental Championship, Regal and Layla become the targets of several attacks by the ex-champ. Regal and Layla soon employ fellow countrymen, Paul and Katie Lea Burchill as bodyguards. For weeks, the incestuous duo manage to protect Raw royal couple from the straight edged superstar. While searching for Katie backstage for their tag match against Mickie James and Kelly Kelly, Layla happens across Katie and Regal flirting near catering. Layla creeps off, upset but unnoticed. After the tag match, Katie gets in Layla’s face for getting pinned. A huge catfight ensues and Regal and Paul have to intervene to separate the two Divas. The next week both ladies escort Regal to the ring for a non-title match-up with Kofi Kingston. They start fight once again at ringside. The distraction causes Regal to be pinned and lose the match. Backstage, an angry Regal demands that the British beauties settle their differences atÂ ‘The Grandest StageÂ ofÂ  Them All’

Katie and Layla come down to the ring, game faces on. Regal is atÂ ringside sitting in his throne. The Divas put on a surprisinglyÂ brutal match. They fight tooth and nail and at one point, the action even spills into the crowd. Layla eventually picks up the upset viaÂ ‘The Layout’. Regal enters the ring, seemingly to congratulate hisÂ ‘lady friend’. Suddenly he grabsÂ Layla and throws her down to the mat.

Layla looks up atÂ Regal in disbelief as he helpsÂ Katie to her feet. He then engages her in a passionate kiss. Layla attacks the pair like aÂ wildcat. She is soon pulled off of Katie byÂ Regal, who holds her while Katie gets her licks in. It’s not looking good for Layla when Paul Burchill runs down toÂ the ring for the save. He takes out Regal and has a stand-off with his little sister. She gets in his face, screaming: “What’s your problem?” Burchill stares her right in the eye right before he slaps the taste out of her mouth. A stunned Katie rolls out of the ring and retreats with Regal.

After being helped up by Burchill, Layla plants a gentle kiss on his lips and makes her exit, leaving him just as stunned as his sister. The two go on to feud with Regal and Katie, as well as formingÂ an on-screen romance.

What do you think? Comment below and be sure to visit on ‘Mania Weekend for the final Fantasy Face-Off. Until next time.