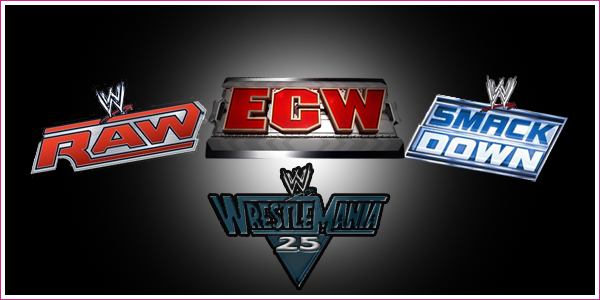 While WrestleManiaâ€™s 25 Diva battle royal might be a dream come true for some Diva fans, its a train wreck waiting to happen for most. What happened to the good olâ€™, one-on-one matchups. Well for the next few weeks leadingÂ up to WrestleMania,Â Diva Dirt will beÂ bringing you theÂ Wrestlemania dream matches that we wish would happen or might even happen in the future. Welcome toÂ WrestleMania Fantasy Face-Off!

Raw begins with all the Divas from all three brands in the ring. They’re chatting to one another about why they’ve all been called out. Stephanie McMahon‘s music hits and she comes out accompanied by Vickie Guererro and Theodore Long. They announce that at WrestleMania there will be a Tri-branded Diva Gauntlet Match. In the coming weeks qualifying matches will be held on all three shows to determine the participants. They also announce that Women’s Champion Melina and Diva’s Champion Maryse are ineligible to compete, as the winner of the match will get a title shot for the championship of their choice at ANY TIME. The Divas clear the ring for the first qualifying match, Mickie James vs Jillian. The qualifiers go as such:Â
Â
Mickie James def. JillianÂ
Natalya def. TiffanyÂ
Michelle McCool def. EveÂ
Beth Phoenix def. Kelly KellyÂ
Katie Lea def. Alicia FoxÂ
Maria def. Nikki BellaÂ
Candice Michelle def. LaylaÂ
Gail Kim (debuting) def. Rosa Mendes and Brie Bella in a Triple Threat Match.Â
Â
With WrestleMania only a week away Raw has a 8 Diva Tag Match featuring all 8 Gauntlet participants. Mickie, Gail, Candice and Maria manage to pick up the win after Mickie hits a Mickie-DT on Michelle. After the match, things get heated when Beth gets in Mickie’s face. A brawl breaks out and the Faces clear the ring. Mickie holds up Maria’s hand in victory, then lays her out with a vicious clothesline. Gail and Candice argue with her, and she goes psycho. She takes them both out, screaming: “The belt is mine!”Â
Â
The week before WrestleMania, Gail challenges Mickie to a singles match on Raw. The match goes back and forth but is thrown out when Mickie hits Gail across the back with a steel chair. The Face Divas come out to check on Gail while Mickie goes up the ramp, laughing maniacally.Â
Â
No sign of the Divas until Sunday night for the Gauntlet Match. A video package is shown, featuring clips from the qualifiers and Mickie’s heel turn. The match is announced and the Champions make their way to ringside. Candice Michelle is the first out. Second entry is Natalya. Candice taps to the Sharpshooter at the 5 minute mark. Next out is Katie Lea. The Diva goes back and forth in good exchange, but Natalya takes Katie out with a German Suplex at the 7 minute mark. Next out is Maria. Before She can make it in the ring, Natalya hits her with a stiff kick to the head. 1,2,3. Maria is eliminated. Next out is Beth Phoenix. The Powerful Vixens have a hard-hitting outing. At one point Beth hits a SuperPlex off the top, but only gets a two count. Natalya roll comes to a halt after Beth finishes her with the Glam Slam at the 10 minute mark. Beth is beat up and struggling to her feet when the next entrant runs out. Michelle McCool! Michelle stomps down Phoenix and locks in the MADT for the quick submission. Mickie James is out next, with a new dark look reminiscent of her TNA days. Near the end of the match, Mickie goes down after a nasty dropkick to the knee. Michelle breaks character and goes to check on the seemingly injured Mickie, only to be rolled up for the pin. Mickie scrambles to her feet, laughing while a furious Michelle heads to the back. The last entrant, Gail Kim comes charging down the ramp, seeking retribution for Monday’s attack.Â
Â
The Divas put on a clinic, countering each other move for move. Mickie even manages to power out of Gail Kim’s Christo. It looks like Gail has in the bag with a top rope sunset flip, but Mickie sits down and grabs the ropes. The ref doesn’t see it and counts the three. Your winner is Mickie James!Â
Â
After the match, Melina and Maryse get in the ring to let Mickie know they’re not going down without a fight. Almost immediately Mickie attacks Melina with a kick to the gut and a Mickie-DT. Maryse encourages her, but is also attacked. The two Champions are out cold side by side in the middle of the ring. Mickie calls the ref back and pins both Melina and Maryse at the same time. She gets the three and grabs both belts and holds them high above her head. Mickie James is the new Women’s and Divas Champion!Â
Â
Mickie’s reign of terror on Raw, Smackdown and ECW lasts for several months, before losing both the Diva’s Championship and the Women’s Championship to Gail Kim and Beth Phoenix, respectively.Â
Â
I hope everyone has enjoyed WrestleMania Fantasy Face-Off! It has really put my creativity to the test, but I enjoyed every minute of it. Let’s keep our fingers crossed and maybe at least one of these matches will actually happenin the future.Â
Â
On a unrelated note, make sure you’re here at Diva Dirt for the WrestleMania Live Blog tonight! I will be!